"Minna Leinonen manages to pull off the most important requirement in writing an opera: to write music that perfectly merges with the other elements surrounding it but nevertheless retains its own voice. [- -] I would not hesitate to describe Alma! as a major breakthrough for Leinonen."

There is ample potential for cross-discipline projects in the performing arts in Finland, even if there still are rigid structures keeping the various genres in their dedicated silos. The ‘kinetic opera’ Alma! written by Minna Leinonen shows just how far it is possible to go by merging music, dance and theatre. Postponed from the Tampere Biennale last spring, the production was premiered in a streamed performance on 17 February.

We must not forget literature, of course, because the work is based on the multiple prize winning novel Alma! (2016) by Hanna Weselius. The book is a complex literary tapestry, and distilling it into an opera is no mean feat.

In adapting her own text into a libretto, the author pruned many of the digressions but retained the linguistic virtuoso flair. The text is replete with poetic images and fantasy-laden allusions, providing a wealth of inspiration for music and dance.

Minna Leinonen’s colourful and expressive score ranges far and wide, from nervous twitching to lyrical sparkling, bringing a ray of hope to the fates of the anguished women in the opera. Petri Kekoni’s choreography brings a physical expression to the topics, illustrates emotions and subconscious motives and visualises the bonds between the characters in an appropriately symbolic way.

Conducted by Jutta Seppinen, the production features two singers, one dancer-singer, four dancers and an ensemble of four musicians. The artistic genres support each other, merge and engage in dialogue. This was clearly a collaborative effort from the ground up, which is not at all usual in opera. The multi-discipline CHANGEnsemble conducted by Seppinen is involved in the production along with the Tanssiteatteri MD dance company.

The title character of the novel and of the opera is Alma Mahler, who was married to composer Gustav Mahler, architect Walter Gropius and author Franz Werfel in turn and whose potential career as a composer was stunted by her status as a wife. As a parallel to her, we see a modern-day visual artist and single mother, Aino, who is struggling to finish the portrait of a woman and who is having difficulty with her life generally. The two characters meet on a meta-level, providing universal commentary on the status and emotions of women.

The third character is a lawyer, also a woman, and as such a further facet to the feminist theme. She berates Alma for being wishy-washy and for submitting to male dominance, calling her “a cow, a Sacher cake, a cream pastry, a powderpuff and a problem wearing an ostrich-feather hat”. So much for sisterly support.

The men in Alma’s circle are seen as selfish oppressors. Gustav Mahler makes a cameo appearance (played by dancer Samuli Roininen), making arrogant and humiliating remarks about his wife’s music and demanding that she dedicate her life to him.

There is also a scene where painter Oskar Kokoschka commissions a naked doll from a dollmaker – after his and Alma’s relationship had ended – to viscerally represent Alma’s unborn child. The dancers twist and toss the doll grotesquely and brutally.

The creators clearly empathise with Alma, as the lawyer obviously fails to understand the circumstances and sensibilities of a society lady of a century ago. However, Alma also takes pride in being “the centre of gravity of her solar system, orbited by glowing satellites”. The libretto incorporates extracts from Alma Mahler’s diaries, which are not found in the novel.

The music referring to Alma is lent a tonal flavour by a Leitmotif that accompanies her; this comes from a song written by Alma Mahler herself, Der Erkennende, a setting of a poem by Franz Werfel. The song appears not only as motif fragments but also in a full arrangement in a scene that provides a nostalgic pool of tranquillity amidst the furious flood of fragmented drama.

The Sprechgesang of the lawyer is from a different world, incisive with wide, leaping intervals. Soprano Olga Heikkilä gives a frenzied and furious performance in the role.

The role of Alma was performed by Suvi Eloranta, both singing and dancing, and this illustrated the aspects of Alma’s inner self very well. Instead of performing Alma as a diva, Eloranta emphasised just how ordinary she was. 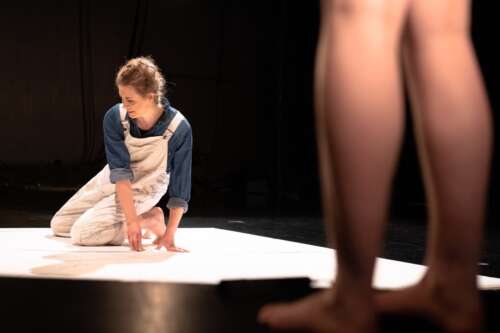 In the novel, the story of Aino incorporates multiple references to the present day, but episodes such as the Nigerian girls kidnapped into sex slavery were omitted from the opera. The challenges of a single mother’s everyday life are juxtaposed with the labours of artistic creativity, and repeated attempts at online dating are a poor substitute for meaningful relationships. In an amusing jab at ‘Tinder culture’, the dancers depict men busy with their hyperactive hobbies, pausing only to request the company of a nice girl “to sit quietly beside them in the petrol-smelling car”.

Aino remains a less well developed character than Alma; we do not see quite enough of her inner drama. The character is vivid, however, thanks to the singing of Tuuli Lindeberg, whose clear and pure voice is one of the gems of the Finnish contemporary music scene.

At the end, Aino and the lawyer stand back to back, “revolving slowly in a black vortex in the pools of space”. The voices of the singers merge in a glittering duet reminiscent of the end of Der Rosenkavalier. The harmony of female solidarity is an enduring image, but if there is such a yearning for love, why are men treated so harshly in this work?

Minna Leinonen manages to pull off the most important requirement in writing an opera: to write music that perfectly merges with the other elements surrounding it but nevertheless retains its own voice.

The clear treble tones of the flute, viol and percussion evoke magical soundscapes, and in the scene between Aino and the nude girl model, for instance, the flute joins the singers in a duo-like interaction. On the other hand, Leinonen knows how to conjure up dramatic effects and rapid mood changes from the diminutive instrumental ensemble.

I would not hesitate to describe Alma! as a major breakthrough for Leinonen. The electronic sound design by Jussi Suonikko expands the music spatially.

The lighting by Jonne Nieminen and Sari Mayer is at least as important a component in the staging as the minimalist set designed by Petri Kekoni. The dancers gave an excellent performance of Kekoni’s movement language, which is at once physical and symbolist, and the text extracts read by the author herself provided an appropriate distancing effect contrasting with the action on stage.

We can only hope that this work can soon be seen live.

Minna Leinonen's Alma! was nominated for the 2022 Nordic Council Music Prize on May 10, 2022. The winners will be announced on 1 November in Helsinki. Read more here. 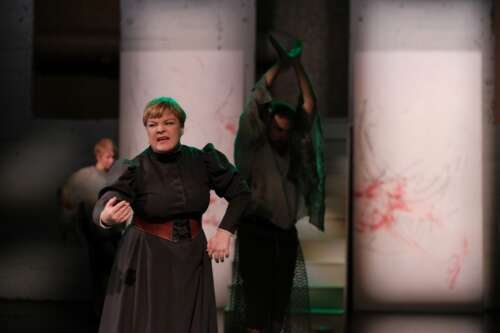 This review was first published in Rondo Classic in Finnish.