"When accordionist Kimmo Pohjonen invited me to join him at his sauna society in January I couldn’t resist. But I was afraid. I’ve been courageous enough to attend many Kimmo shows and survived. But here was a challenge."

At the opening of Soundbreaker, a documentary about accordionist Kimmo Pohjonen, we see him walking out over frozen sea to a hole in the ice. Without hesitation he plunges in. Kimmo Koskela’s film shows one of the world’s most extraordinary accordionists playing underwater, wrestling with bellows on the ice, performing with farm machinery and Kronos Quartet. Okay, playing the accordion underwater is just a filmic effect, but jumping into the avanto (ice hole) is real.

Kimmo came out of the third intake of the Folk Music Department of the Sibelius Academy into a major international career. His music has a visceral power and so does the man himself.

So when Kimmo invited me to join him at his sauna society in January I couldn’t resist. But I was afraid. I’ve been courageous enough to attend many Kimmo shows and survived. But here was a challenge. As everybody knows, sauna culture is one of the best things about Finland. I love getting super hot and the breaking down of inhibitions that accompanies it. But even in the summer I’ve found it pretty hard to jump into a Finnish lake, except to escape the mosquitos. Could a weedy English guy like me plunge into the freezing Gulf of Finland?

Kimmo’s sauna society (Talviuimarienkerho Ry) has been going for over a century and he’s been a member for 25 years. “Unlike a lot of these clubs, it’s not at all elitist,” he says as we walk through the cemetery to get there. “It’s just a regular place.”

We get into swimming trunks and Kimmo gives me some plastic slippers as the paths outside are icy and gritted. “That’s all you’ll need,” he says. I was hoping to take my towel as a sort of security blanket. Something comforting to wrap round me because it’s really cold out there.

The sea is frozen right across to Seurasaari in the distance. The ice is thick enough to walk on. The avanto isn’t literally a hole in the ice, there’s a wooden pavilion and steps down into the water where an underwater propeller keeps the water moving so it doesn’t freeze over. Kimmo normally swims even before he goes into the sauna. If I do that I reckon I might be the next one in the cemetery. I need to get really hot first before I’m ready to take this on.

The sauna is not large but long. What makes it special are the windows looking out across the snow and ice. It’s beautiful at sunset, he says.

I love the sensation of gazing over the ice as Kimmo pours water onto the kiuas, the hot stones. I somehow feel that learning the specific names for these things might, like mental amulets, help me cope with what’s to come. The heat comes up the wall from behind in a searing hug. A dish-shaped ladle brings an invigorating sharp heat. The other, which pours like a watering can, brings a softer, enveloping glow.

“Are you ready to try?” asks Kimmo. I suggest we throw one last ladle of water onto the kiuas (like a last cigarette before execution) so I’m absolutely as hot as I can be. “You really want to feel the löyly!” laughs Kimmo. Löyly is the surge of steam and heat that comes off the sauna and the good feeling it creates. It sounds like something mystical and I am ready to step out.

A slightly stern lady tells me not to do anything I don’t want to do. She obviously feels Kimmo might be coaxing me further than I want to go. It couldn’t be further from the truth. I am certainly pushing myself, but Kimmo is just making it as easy and comfortable as possible. “This is not a competitive sport,” my sauna kaveri (sauna buddy) says. 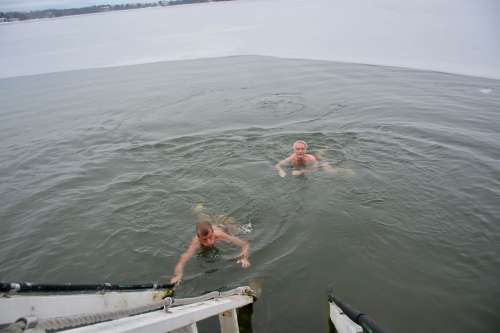 "Could a weedy English guy like me plunge into the freezing Gulf of Finland?"
Photo: Antti Kuivalainen

It’s a minute’s walk from the sauna to the water. Kimmo says it’s good to cool down from 85 degrees - sometimes hotter when the löyly gets to you - to the water which a temperature indicator shows to be 1.2 degrees. Kimmo flicks off his sandals, heads down the steps and straight into the water. I know that I have to keep moving forward and if I stop to think it could end in failure. Yes it’s cold, but onwards. The löyly is somehow giving me its magical protection and I push myself in. I swim out to the bubbling water above the propeller. Somehow I have the presence of mind to look around at the ice and distant forest… at eye level! I’m really here.

Kimmo lists various stages of avanto swimming. The first is that the body goes into shock at the sudden cold. “The shock is so much that it makes you forget any other problems. If my head is stuck with some musical issues, this is a way to unblock them.”

I can certainly feel the shock, but I can still swim. 30 or 40 seconds is enough and then I’m heading back to the steps. I climb up amazed at what I’ve done. It’s partly a fantastic sense of achievement, and astonishment because I really loved it.

Coming out, the cold air (temperature three degrees) now feels like a warm blanket. I can see why you don’t need a towel. “The second stage is the blood coursing through the veins to counter the shock,” says Kimmo. “This is the ecstasy of the avanto.” It’s true. I am tingling so much with exhilaration I can hardly walk straight. My body is fizzing and I can’t stop smiling. Apparently this releases the same endorphins as sex. I almost float back into the sauna. It’s fantastic getting into the heat again.

On his album Kluster, Kimmo has a piece called Avanto. It begins with low percussive sounds from Samuli Kosminen which suggest the water bubbling up from the propeller deep down. The accordion comes in with slow chords which I hear as the flat white line of the frozen sea. “It’s also the relaxed mind and body feeling you get after avanto,” he says.

It’s a privilege I can now feel that too. I wonder if he’s ever played the accordion in the sauna? “Yes, but only for a short time. The reeds are set in beeswax, so if it get’s too hot it’s a disaster. But it’s no problem playing in the cold.”

About ten minutes later I’m ready to go again. The second time I’m not fearing it and more assured. By the third time I’m looking forward and getting addicted. “That way to Estonia,” jokes another sauna buddy as he’s coming out!

Simon Broughton is the editor-in-chief of Songlines magazine. He is also a freelance writer and filmmaker, and he co-edited the Rough Guide to World Music books.