PREVIOUS ARTICLES FOLLOWING ARTICLES
"The festival has thoroughly taught me to question and to puzzle over what music actually is, whether considered as actions, definitions or delimitations. Even the simplest contemplation of the relationship between music, tones and other sounds, let alone their relationship to silence and other forms of expression and art, blew my untutored mind, and more than once I found myself reeling as I exited an overwhelming concert into the dusky Viitasaari summer night", writes Jari Hoffrén.

I! R! A! A! S! A! T! I! I! V! These, more or less, were the improvised shouts by Maja S. Ratkje that began one of the opening concerts of the Time of Music festival at Viitasaari. I myself have experienced half of the festival’s forty-year history of upsetting conventions, having visited since 2003. My first time was a chance encounter, but like a random kiss may be the start of something good, my relationship with the festival has evolved over time. Here, I explore this relationship through a simple question: What has this festival-slash-summer-academy taught me, as a listener and as an appreciator?

I identify three stages on the path of the learner-listener. The first stage was to displace the canon of classical music in the mind, the next was to question the very concept of music, and the final stage was gaining an eye-opening insight into the tenuous relations between music, life and freedom.

I was not entirely a novice in the field of contemporary classical music, thanks to the occasional orchestral concerts and the few recordings that surfaced in the public consciousness from time to time (mainly thanks to the Finnish Broadcasting Company). At the Time of Music festival, it very quickly became apparent that the listener would do well to forcefully re-educate himself with regard to his innocent habits. It is a cliché but quite true that the canon of Western classical music is both an asset and a liability. This was true then and it remains true today. The problem is not just with that particular group of men known as composers but also with the normative foundation and commitments embodied in their music, particularly the framework of tonal music and the limited selection of instruments that can and should be viewed with healthy criticism. The classics are classics and shall remain so, but they are also products of bygone eras and as such the number of them that stand the test of time is constantly decreasing.

This trivial fact is a life-and-death issue for surprisingly many music lovers even today. It is also an issue that is ever-present in audience outreach work, as institutions revitalise and revise the repertoires of classical music.

The distinction is not black-and-white, of course not. The Time of Music festival consciously and in multiple ways addresses our relationship with the past and thus cannot be accused of arrogance. A concrete and audience-friendly example of building bridges across time was the opening concert in 2015, which featured 33 Veränderungen über 33 Veränderungen by Hans Zender that draws on the material of Beethoven’s Diabelli Variations.

Having given the devil an inch, I felt myself soon giving a mile. The festival has thoroughly taught me to question and to puzzle over what music actually is, whether considered as actions, definitions or delimitations. Even the simplest contemplation of the relationship between music, tones and other sounds, let alone their relationship to silence and other forms of expression and art, blew my untutored mind, and more than once I found myself reeling as I exited an overwhelming concert into the dusky Viitasaari summer night.

"It was important to realise that instead of the hit factories of conventional music or exoticism for the sake of weird experiences, contemporary classical music is often primarily about an uncertain search, a shaping of expression and critique that not nearly always leads to the joy of discovery."

Every generation seeks new things, and this seems to come with a determination to do things differently. Contemporary classical music leverages the potential of advancements, particularly in technology, and feeds on debate about the status of music and other branches of the arts in life and in society at large. It manifests itself as an inexhaustibly variable range of efforts to surpass, bypass, upset or reset everything that is established or has been done before. It was important to realise that instead of the hit factories of conventional music or exoticism for the sake of weird experiences, contemporary classical music is often primarily about an uncertain search, a shaping of expression and critique that not nearly always leads to the joy of discovery.

Exploring the borderlands of life, nature, the human body, society, possible worlds and the future is not to be taken lightly, even if contemporary music can be quite good fun at times. Realising this fragility leads to an emotional sensitivity to new works and to their creators and performers. Reviews of these works often exudes a particular respect for these trailblazers. In our totally measurable, controlling and calculating world, a fragile freedom lurks within the core of creative efforts, feeding the urge of artists to make artistic sense of our contingent reality. To paraphrase composer Riikka Talvitie: real life will trickle into music, one way or another.

Upholding and promoting contemporary classical music requires dedicated event organisers to assume a particularly serious responsibility. My third insight has to do with festival ethics. Festivals are always about choices, and those choices must be motivated. Why this music at this festival, why not something else? Is there some homeless, genre-resisting and un-pigeonholeable music out there that fails to make itself heard – as with music of past centuries that has only recently been revived and performed?

What, indeed, is the nature of the power that is exercised by a festival, with all its networks and projects? How can a festival, once established and stabilised, maintain its sensitivity and remain genuinely accountable to the new music that it purports to represent, promote and cherish? Will it inevitably become a gatekeeper for a new canon, a revolution that devours its children? 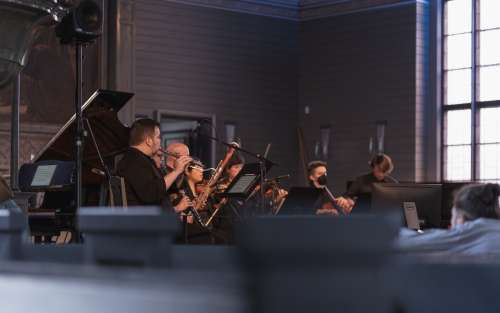 Author Olli Jalonen floated the idea of a MIR index for cultural life. This would involve evaluating various phenomena according to where they seem to be along their development arc. New, alternative things tend to lurk in the margins, bursting with energy for change. Once actions and content gain sufficient recognition and status, they become institutionalised. Having become established and routine-bound, the result is akin to a ritual. Vilja Ruokolainen, one of the executive directors at Viitasaari, discussed the same notion using the tripartite division “impulse, interest, institutionalisation”. These analyses bear a striking resemblance to the life cycle analyses used in the corporate world, though it must be said that applying them to arts festivals is nothing new.

The Time of Music festival is not immune to this problem. Over its four decades, five people have held the post of artistic director, who bears the final responsibility for content choices. The current artistic director, Johan Tallgren, has highlighted the important distinction between the narrower programming and the more multi-dimensional curating at the festival. Curating enriches the relationship of the festival with audiences and with society at large, makes it easier to understand the significance and cultural message of the festival programme and allows for new ways of working with artistic content. Indeed, curating may be a smart move in heading off the risks of institutionalisation and in recalling the nature of the festival being what its founder Timo Kinnunen described as “an undefined happening”.

Actually, we could redefine MIR as “Marginal, Inspiration, Revolution”, a process whose as yet unknown products will perhaps be enjoyed by Stella, a nine-year-old kantele player who thoroughly enjoyed the concerts in this anniversary year. Just think of everything that she might learn!