The Helsinki Chamber Choir has always been an ambassador for the most demanding contemporary vocal music and for Finnish music. In summer 2016, the choir is busy hosting the International Einojuhani Rautavaara Workshop and Competition and the Tenso Days festival in Helsinki in August.

Founded in 1962 as the Finnish Radio Chamber Choir, the Helsinki Chamber Choir assumed its current name in 2005. As Finland’s only professional chamber choir, it has partnered numerous composers in developing the art of choral music over the years, besides giving voice to rarely performed early music.

Lately, the choir’s close collaboration with composers has progressed to the international level with the Rautavaara Composition Competition introduced by the choir and its artistic director Nils Schweckendiek, among other international workshops. It is a logical extension of the choir’s pursuit of excellence in choral music.

Since 2005, the Helsinki Chamber Choir has commissioned and premiered more than 50 choral works, besides premiering dozens of other choral works, including the complete choral works of Kimmo Hakola and, more recently, Antti Auvinen’s opera Autuus [Bliss], recipient of the Teosto Prize, and several works by Lotta Wennäkoski.

There are also many significant choral recordings made by the choir in its previous life as the Finnish Radio Chamber Choir, including the complete works for mixed choir by Einojuhani Rautavaara. Recent discography merits include the opera Anna Liisa by Veli-Matti Puumala and a Grammy-nominated recording of Magnus Lindberg’s Graffiti. And more new music is on the way, such as an album of music by Beat Furrer and a double CD of a cappella works by Erik Bergman.

The concert and recording catalogue of the choir reveals at a glance that new music, particularly by Finnish composers, plays a particular role in its repertoire. Professor Nils Schweckendiek, artistic director of the Helsinki Chamber Choir, confirms the observation:

“As we are the only professional chamber choir in the country, we feel a duty to present and promote the work of local composers. We also want to present the most interesting new work from abroad, so as to give as complete a picture as possible of what is happening in our field.”

However, collaborating with contemporary composers is only part of what the choir does. The choir’s YouTube channel gives an indication of just how broad the repertoire is; in fact, the most watched videos contain performances of Byrd, Tallis and Duruflé.

Early music forms an important part of the choir’s concert repertoire, and its share is growing, says Schweckendiek. “There is much wonderful music from the past, some of it unjustly little-known, which we enjoy singing and which is immensely rewarding for our audiences,” he notes.

A common selection criterion for works both old and new is that the choir seeks to perform works that, for a variety of reasons, do not often feature in the programming of other Finnish choirs. There are plenty of examples to point to: for instance, the choir’s performances of three of Lully’s grands motets, including the famous Te Deum, were quite possibly the Finnish premieres of the works, Schweckendiek explains. Similarly, in the previous year the choir gave a performance of Cherubini’s Coronation Mass, also possibly for the first time in Finland.

“I hope that in the future we will have the chance to programme more Renaissance music – there is a large repertoire of fascinating, challenging and exciting masterpieces that I would love to tackle,” says Schweckendiek.

As a professional chamber choir, the Helsinki Chamber Choir is unique in Finland. Perhaps this is what has led the choir to actively search for partners and networks beyond Finland’s borders.

The Tenso Network of European professional chamber choirs is a particularly important partner for the Helsinki Chamber Choir. It is a network of 20 professional choirs from various European countries that share a similar repertoire focus.

“We meet our partners in Tenso regularly and exchange ideas about repertoire, programming, educational projects, structural issues and many other important areas. There is a great willingness to share successful experiences, and a healthy balance between artistic competition and the solidarity needed to develop our field as a whole,” says Schweckendiek.

Although the funding bases of the member choirs are very different, there is plenty of scope for cooperation in content. The network focuses particularly on collaboration in developing new repertoire and in coaching composers and performers. Projects also involve amateur and youth choirs and thus have a potentially widespread impact. For audiences, the most visible manifestation of the network’s efforts is the Tenso Days festival, the next of which will be held in Helsinki on 26–28 August.

The Helsinki Chamber Choir does not pale in international comparison. Schweckendiek is a highly experienced choir conductor and Professor of Choral Conducting at the University of the Arts Helsinki, and he recognises the strengths of the choir.

“I would say that where our ensemble stands out is in the speed and ease of learning complex new scores, the fearless approach of our singers to even the most ferocious challenges, and their great willingness to try out new and unusual vocal techniques without preconceptions.”

Acknowledging strengths does not mean being content with the status quo.

“We need to work continuously on developing the choir’s sound, and this is made particularly challenging by the fact that our financial structure means we have to work on a project-by-project basis.”

The principal project for the choir this summer is the International Einojuhani Rautavaara Workshop and Competition. Its final concert will be held at the Time of Music festival in Viitasaari on 6 July.

This concert marks the culmination of a lengthy process for choir and composers alike. The deadline for applications was in autumn 2015, and the preliminary selection jury screened five out of the 72 applicants to be invited to the workshop held with the choir and teachers Ondřej Adámek and Jukka Tiensuu in Helsinki in November. The deadline for the composers’ final competition entries was at the end of March. The final stage of the project includes the rehearsals for the final concert, the jury being present also at the dress rehearsal. The competition winner will receive a cash prize besides further performances for the winning entry and a commission for a new work.

Lengthy though the process is, it is about more than just waiting around; it is in fact the key to the entire competition. The workshop and the rehearsals where the entrants have the chance to hear the choir performing their work and to receive feedback from experienced musicians and teachers form a valuable part of the process. “In this way, we hope to give them the best possible basis for writing their final piece for the competition itself,” says Nils Schweckendiek, the artistic director and founder of the competition.

“The aim of the International Einojuhani Rautavaara Workshop and Competition is to give very talented young composers the opportunity to work intensively with a professional choir over an extended period of time, so that they really get to know the medium,” he says.

The underlying purpose is to advance choral repertoire and to improve the capabilities of young composers for writing interesting music for choir.

“We often notice that even experienced composers do not always fully understand the nature, possibilities and limitations of the human voice,” explains Schweckendiek.

“The intense collaboration between composers and performers – and it really is a dialogue – is of great mutual benefit, improving both the compositions and the performances. And as a professional choir, we are of course keen that composers should exploit the expressive possibilities of our medium to the full to write us new, meaningful and interesting music,” he says.

The Nordic Choir Expedition and other plans for the next season

There is little downtime for the choir after the Rautavaara Competition. The Tenso Days festival is being held in Helsinki for the first time on 26–28 August. Its theme is ‘The Nordic Choir Expedition 2016’. The festival will be hosting chamber choirs from Sweden, Norway and Denmark in a programme of five concerts, workshops, panel discussions and repertoire presentations.

There will be four choirs from the Nordic countries – Eric Ericson’s Chamber Choir, Det Norske Solistkor, Ars Nova Copenhagen and the Helsinki Chamber Choir – along with the Tenso Europe Chamber Choir. Two of the concerts will be conducted by celebrated choir conductor Paul Hillier.“

Though billed as a festival, it is actually a tour. The Nordic Choir Expedition begins in Oslo in the week before the Helsinki event and will continue to Copenhagen and Stockholm in October.

The choir has other foreign trips planned for the coming season too.

“We will also be travelling to the United States in late September and early October to give a series of concerts in Michigan and New York. In May 2017, we will be returning to Mechelen in Belgium for another appearance at the Tenso Days festival there,” says Schweckendiek. 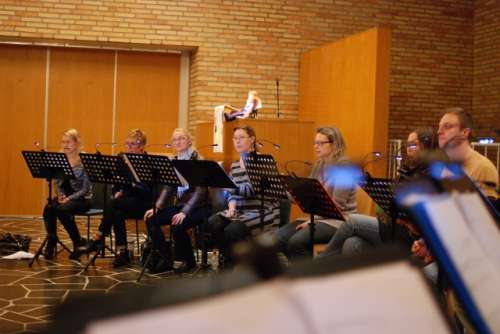 The Helsinki Chamber Choir premiered Alex Freeman's hour-long a cappella work - composed in memory of the Finnish civil war in 1918 - Under the Arching Heavens: A Requiem. The concert can be listened to here.

The Helsinki Chamber Choir at the Musica nova Helsinki festival on 2 February, 2019.