War, prison camps, famine and death are rather less than cheerful topics to feature at a music festival. Sibafest 2018, organised by the Sibelius Academy of the University of the Arts Helsinki, managed to find optimism within its chosen theme of #civilpeace – a message of peace, future, reconciliation and coexistence.

When Sibafest, the music festival organised by the Sibelius Academy of the University of the Arts Helsinki, began in late January, it was 100 years to the day from the outbreak of the Finnish Civil War. This conflict left painful marks on the national psyche, as it turned the newly independent nation against itself and propagated unspeakable cruelties on both sides. The artistic director of this year’s Sibafest, conductor and professor Atso Almila, wished nevertheless to highlight this tragic centenary alongside the jubilant independence centenary last year – or, to be more accurate, to highlight its flip side or #civilpeace, as Almila formulated it, being an avid Twitter user.

“There has been a lot of thought on whether art has anything at all to contribute to social debate. The ‘civil peace’ concept quickly fostered angles on how to approach the conflict a century ago, for instance from the point of view of composers, and to relate it to the world we live in today. On the other hand, it is also relevant to consider whether we could employ art to bring people closer together in this age of increasing hate speech,” says Almila.

“One of the first things I thought of was to launch the event with a children’s day.” And so it was that 100 years after hostilities began, a singing picnic with the Moomins was held at the Music Centre in Helsinki city centre, and the music of Marjatta Pokela, a favourite with several generations of children, was performed in the concert hall. The evening continued with a multicultural folk music extravaganza given by the Siba Folk Big Band, the Global Orchestra and Pekko Käppi.

The nine-day festival incorporated elements as diverse as ping-pong and club nights, future-oriented showcases by young musicians and composers, and generally living in the moment with great joy. 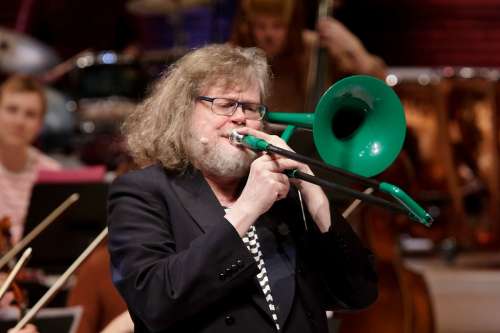 The sombre past was very much present as an undercurrent at the festival, however. The hundred-year-old trauma was addressed through music in multiple ways, some of them highly insightful – by no means an easy task, considering that this is a subject frequently avoided in Finland. The festival highlighted what happened to composers during the Civil War, featured performances of marches and songs of both Reds and Whites, and popular music of the day from a century ago were also heard.

To take one example, folk musicians Helmi Camus, Minna Koskenlahti, Tero Pajunen and Iida Savolainen had done a thorough job with their archive research for the Red and White Songs concert and followed it up with their own interpretations of the themes and moods of the war. By contrast, the Second Symphony of Leevi Madetoja from 1918, performed by the Sibelius Academy Symphony Orchestra conducted by Atso Almila at the concluding concert, was a musical portrait of Finland’s aspirations after the Civil War – a fresh start after a devastating loss.

Actually, history was probed far further back than just the Civil War a century ago, since the programme included ancient Finnish murder ballads (for more on the project by Heikki Laitinen and Kimmo Pohjonen, have a look on the album review here), European 16th-century works for viol, an oratorio by Handel, music reflecting the nationalist trends of the 20th century and echoes from the Second World War. Finland’s struggle in the Winter War and Continuation War were very much to the fore in A closed-down village by Anne-Mari Kivimäki (for more on this project, see the FMQ article from 2016).

Moreover, war has never disappeared from the world, so it is scarcely surprising that many performances drew parallels with the present day. Modern wars were alluded to for instance in folk music in the concert Songs of war and reconciliation. Stravinsky’s A Soldier’s Tale, staged jointly with students from the Theatre Academy of the University of the Arts Helsinki, was linked not only to Finland’s wars but also to timeless greed, today’s passive youth and the new rise of nationalism. 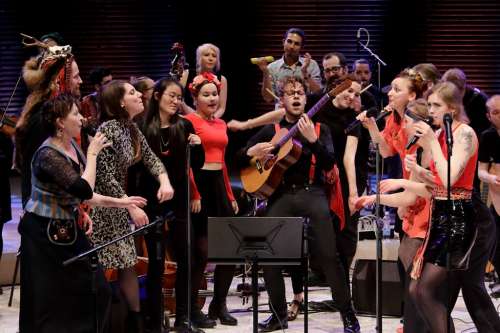 One of the core concepts of Sibafest is to showcase the activities of the Sibelius Academy of the University of the Arts Helsinki in all its diversity. Organised every other year, the festival features students and teachers at varying points in their careers, and efforts are made to have anything and everything possible represented. This year’s festival succeeded admirably well in this. Talent and content were in abundant supply, sometimes almost too much so, as inspired young artists tried to fit absolutely everything into their performances.

The Future of Jazz concert was a wonderful cavalcade of new works and new composer names, as it featured new works by students for big band. Special attention was given in the festival programme to Sauli Zinovjev, who wrote a cello concerto for the concluding concert, and Sirja Nironen, the soloist at this premiere. Written as a homage to the centenary of Finland’s independence, Die Welt – Ein Tor harked back to German Romanticism, and not only because of the poem by Nietzsche that provided its inspiration. Yet the emotional charge in the work was very much of today’s world, and Nironen’s expressive performance of the solo cello part painted a compelling image of what it is to be lonely and an outsider in a cold world. 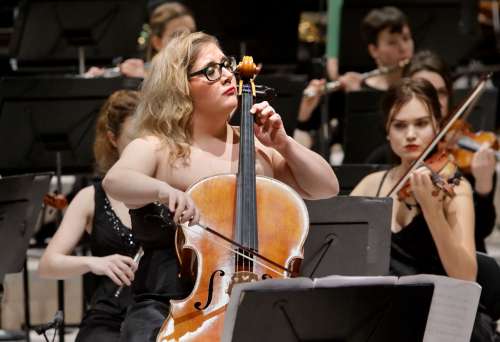 Though the theme for this year’s Sibafest came from Finland’s history, a wide perspective and breadth of interpretation was ensured and affirmed by the highly international profile of the students performing. “I am sure that there are people among the students who have personal experience of much more difficult circumstances,” says Almila. “I feel that the students embraced this theme with great enthusiasm.”

One of Almila’s underlying ideas with the #civilpeace theme is to foster unity, here and now:

“That we, who try to live and exist together here, wherever we may come from, that we could find each other’s hands, that we could explore relationships through good things. Music helps us understand this. It is such a great power that you cannot really understand it until you are there to experience it.”