Composer Maija Hynninen works extensively with new technology, but this does not diminish the importance of the traditional craft of a composer, quite the opposite. A composer’s work is about listening and processing, and that takes time, she says. For Hynninen, every work is a new process of exploration. She discovered a new kind of courage while studying in California.

In the music of Maija Hynninen, layers of reality slide over each other, fracturing and revealing glimpses of something inscrutable. Typically, this happens at the nexus of electronic and acoustic sound. Perhaps this has to do not so much with mysticism as with a philosophy of sound with connections to various aspects of culture and society.

As I meet her in February 2021, she is relieved. Her first real orchestral work, the oboe concerto Incandescence, was finally premiered by Kyeong Ham and the Finnish Radio Symphony Orchestra at the concluding concert of the Musica nova Helsinki 2021 festival. The concerto had lain dormant for four years: having been on the recommendations list of the Uuno Klami Composition Competition, it had been programmed by two orchestras and then cancelled for various reasons. Ironically, it was in the midst of all the cancellations and uncertainty of the coronavirus pandemic that the premiere finally took place. Even the proposed soloist for the premiere had changed three times; the work was originally written to a commission from Eeva-Kaisa Rönkä.

“It isn’t easy to find opportunities for getting orchestral works performed,” Maija Hynninen says. If you fail to gain that all-important first commission, you end up in a limbo, because no one in the field will know that you are a potential orchestral composer. The competition for visibility is fierce. Hynninen notes that teachers or referees can often broker opportunities, and if a work once premiered gains further performances, that is a boost up the greasy pole. As an example, Hynninen mentions her ensemble piece New Holland, which was enthusiastically received in St Petersburg in 2013 but was not taken up in Finland until last year: the Hyvinkää Orchestra performed New Holland a year ago in March.

“But the main thing is to just keep on writing and not be bothered if a work doesn’t take off. It’s difficult to get your music programmed if you haven’t written standard works such as string quartets. It’s been easier to cope with this during the pandemic, with all the peer support that has been available,” she says.

With the onset of the coronavirus pandemic, Hynninen and her family relocated to Finland from the USA, where she had been working on an artistically oriented doctorate at the University of California, Berkeley for nearly four years. She spent her time there studying and teaching computer-assisted composition, seeking inspiration in technology and writing a new ensemble work as part of a research project on a computer-assisted orchestration tool.

Contemporary music is not difficult

How did Maija Hynninen end up as a composer in the first place? She originally studied the violin in Norway but did not feel at home with interpreting existing classical repertoire. Contemporary music felt much more appealing. “Contemporary music is not difficult, because we instinctively understand what our times are like. We all live in the present, and interpretation is born out of that,” Hynninen enthuses.

She stopped being an instrumentalist and applied for the composition class at the Sibelius Academy. She had in fact been writing music since she was a child. “I was timid but prepared to work hard. Paavo Heininen’s classes were all about technique, about the craft, and this suited my violinist personality.”

Hynninen and her family left for California in 2016 in the midst of a family crisis: their youngest child was seriously ill, and Hynninen feared that her career as a composer might be in jeopardy. Yet she decided to apply for the doctoral programme at Berkeley and was accepted. The family adapted to life in the USA very well, enjoying Halloween and the giant redwood trees and so on.

Research is what puts the soul into a piece

At the University of California, Berkeley, Hynninen was assigned to assist Professor Carmine Cella, who has developed a computer-assisted orchestration software application named Orchidea. Her task was to write an ensemble work using the tool being developed and to help improve the tool to cater to composer’s needs. Hynninen, who has also studied at IRCAM in Paris, has never considered computer-assisted composition as meaning that the computer does some of the composer’s work for them. The purpose of Orchidea is for the software to suggest how the sounds in given concrete sound samples could be rendered through orchestration.

“For instance that a particular breathing-like sound could be approximated by adding a high col legno harmonic on a violin,” Hynninen explains. It is important to note that the computer does not make the work any faster or easier. It simply provides ideas which the composer must then know how to process, even if they initially seem alien. “A composer’s work is about listening and selecting, and that’s tough. That’s where the craft comes in.”

Technology has been an important element in Hynninen’s work as a composer for a long time, and electroacoustic works are a major strand in her output. She views electronics much like she views a symphony orchestra. “Electronics contains an entire world, a wealth of sound. All you need to access it are one person, one computer and a pair of speakers.”

But she is itching to come to grips with the colours of the orchestra, given that acoustic instruments are unique and that she is specifically interested in instrumental properties and in exploring tonal colour. She gets up close and personal with the instruments with which she works, searching for new sounds with musicians and experimenting on the computer.

“I find that I tend to zoom in further and further towards the core of the sound, the colour, which is made up of overtones and their dynamic envelopes. Slight dynamic shifts within a tone can be inspiring because of how subtle they are. It’s like placing tiny weights on a scale, seeking to preserve a delicate balance,” she explains. “It’s exciting how broadly you can experiment with sonority and texture using electronics. The parameters of electroacoustic music, such as distance, localisation and multi-dimensionality of the soundscape have become important elements in my acoustic works as well.”

Hynninen points out that working with technology actually highlights the craft and skill required in this time-consuming work. She wanted to make use of the offering at Berkeley and completed a module in new media including such diverse elements as philosophy, cyborgs, graphic design, feminism and building wireless devices. Her studies proved to be a welcome breathing space.

For Hynninen, every piece is a new research process where she seeks to push her own boundaries and dare to explore something new. This takes time. She notes that recently she has become more relaxed, allowing ideas to meander and opposites to clash. “Research is what puts the soul into a piece.”

Hynninen found the music scene and the general climate for conversation more relaxed in the USA than in Europe. She felt at home and inspired in California, even though living there as a struggling composer on a grant with family in tow was by no means easy. “I discovered a new source of courage there and an attitude of not caring what other people might think.”

Nevertheless, Finns find it difficult to adjust to the American way of putting oneself forward, which is ingrained in everyone as early as in elementary school. “You have to be honest to yourself and promote yourself in ways that are feasible for yourself. This will bring you into contact with people with whom you want to collaborate, and they in turn will help shape your path,” Hynninen explains.

Hynninen experimented with lights and microcontrollers at Berkeley and explored how to engage with people in different disciplines. This comprehensive approach also provided input for her composing.

Having sat on various grant boards in Finland, she has found that women are more reserved than men on grant applications and that women are underrepresented to begin with. “We should have the courage to propound our ideas even if they are still in progress, just to make a statement saying, hey, look at this, this is what I do.”

This leads Hynninen to reflect on diversity more generally – with regard to not just gender but also age, educational background and geographical distribution. “It’s really difficult to sustain diversity in selections if the applicant pool is not heterogeneous in this sense. Institutions and performers should be sensitive to the importance of upholding diversity and should venture to raise up less well known names.”

Hynninen summarises the work of a composer thus: process, make a synthesis, build an individual voice. She mentions the importance of dreaming. “Dare to see what you want to do three years from now. That will build an arc that will carry through into the future, even if that dream never actually comes true.” 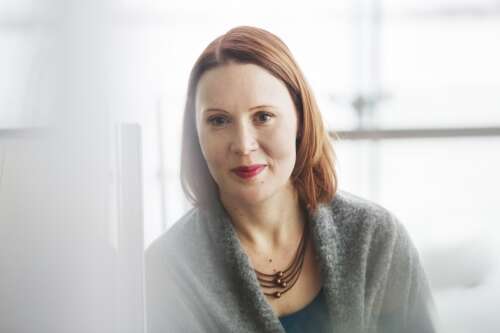