"Foreigners like me once had the idea that Finland was a difficult country in which to be a composer; so strong was Sibelius’s legacy and so dominant those famous names who succeeded him. But that idea now seems outdated," writes Andrew Mellor in his column on the Day of Finnish Music.

In the Spring of 2015, I was contacted by the Society of Finnish Composers and asked if I would be willing to interview ten of the Society’s members for a documentary film marking its seventieth anniversary. My response, of course, was a resounding ‘yes’. I simply asked for a list of the ten composers to be featured.

However, Annu Mikkonen, the Society’s Executive Director, suggested I choose the ten composers myself. The task of drawing up a list of ten from the Society’s extensive membership seemed impossible. The solution was to choose composers who would, together, create a balanced picture of new Finnish art music in the second decade of the twentieth century. I looked for as broad a range of ages, experience, sexes and musical styles as was feasible.

Eventually I settled on a list of 20 names, with the plan to reduce that list to ten with advice from the Society on matters of diversity and availability. But even that proved too difficult, and we settled on a final list of thirteen. The resulting film Composing Out Loud, directed by the wonderful Raimo Uunila, is based on interviews with these thirteen musicians and Raimo’s documentary footage of them in their ‘natural habitats’.

Most non-Finns with some level of interest in classical music know that this country has an enviable record when it comes to instructing and supporting composers. Even so, the extent and variance of the talent I encountered when scouring the Society’s membership took me by surprise.

There are dozens of gifted, fascinating and even internationally recognized composers whom I simply did not have room to include even on the list of twenty (I consciously tried, in fact, to steer clear of composers foreigners know well; one exception was Magnus Lindberg whom I just had to meet).

Still, even among our thirteen chosen composers the breadth and seriousness of Finland’s composing tradition shone through in unexpected ways. All of the artists we interviewed were disarmingly honest. Most admitted to failures, doubts, difficulties and periods of concern about their abilities and relevance. A surprising number described the process of composition as unpleasant, boring and painful. They spoke frequently of loneliness and of isolation.

But just as often, they spoke of freedom – as their music does. Foreigners like me once had the idea that Finland was a difficult country in which to be a composer; so strong was Sibelius’s legacy and so dominant those famous names who succeeded him. But that idea now seems outdated. Finland’s composers, young and old, are creating music of originality and craft and most of them feel free to do so in whatever aesthetic framework they see as relevant. 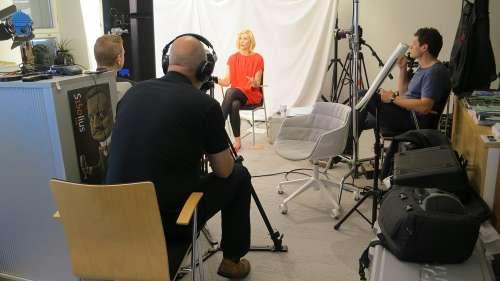 I’ll cite some examples. The youngest composer on our film, Sebastian Dumitrescu, is forging ahead in his belief that the twelve tones of the western scale are too limiting. Olli Virtaperko is on a mission to connect his work with society at its broadest, a process that is fuelling his imagination with borderless, poly-stylistic results. Anna Huuskonen is one of a new generation of composers whose freedom from passé modernist dogmas has delivered music of genuine textural originality.

Sid Hille and Aki Yli-Salomäki have honed distinct aesthetics that might once have been dismissed by new music’s ruling class but which are now recognized for their freshness and craft. Outi Tarkiainen and Lotta Wennäkoski are writing probing, complex art-music that’s often hard-wired into other art forms like dance, circus and film – a vital new development.

And nature? It remains a central tenet in Finnish music, but it might just as well be the beaches of eastern Australia (as in Yli-Salomäki’s works) as the changing seasons and distinct landscapes of Finland itself.

Humbling too is the extent to which these composers can be said to sacrifice normal life for their art. There is little shutting off from a current project, which will weigh on a composer’s mind while sleeping and waking, while parenting and shopping. None of the 13 composers featured take the easy route in their scores. Finland’s high standards and excess of talent means they can’t afford to (that, in itself, is a national triumph). That is surely the case for the dozens of composers we didn’t have the resources to feature, too.

But all this talk of strain and stress shouldn’t overwhelm us. In one scene filmed by Raimo, Minna Leinonen suggests that a truly happy day is one spent composing for eight to ten hours. Perhaps even more telling is Seppo Pohjola’s reflection on his own personal compositional breakthrough – one that provided him with such intense joy that he began to love life once more. That, surely, is why we need music in our lives. And, therefore, composers.

The documentary film series ”Composing out loud” has been commissioned by the Society of Finnish Composers.

This article has been co-commissioned by FMQ and Kompositio, the magazine of the Society of Finnish Composers.