In July 2021, the audience of Our Festival will be able to witness the six-member international working group of the festival and the Globe Art Point artist residency telling a story of European identity and migration in drama and music – or at least that is the plan. The inspiration for this production comes from the life story of Finnish-Iranian musician Marouf Majidi and Virgil’s Aeneid.

Both the present writer and the interviewees are keeping their fingers firmly crossed during the Zoom interview. The interviewees are working on a production that definitely needs to be experienced live. It is to be an immersive experience where the audience can step into an imagined bar and meet characters from the myths of Antiquity that set forth a timeless tale of migration and the European identity. If all goes to plan, Finnish festivalgoers will be able to witness the shaping of the first part of this production at public rehearsals held at Kallio-Kuninkala in Järvenpää as part of Our Festival.

The production is being created by an international team of artists selected for the residency jointly arranged by Our Festival and the Globe Art Point GAP LAB. The team members are composer Marouf Majidi, composer’s assistant and arranger Gaia Schiller and actor-musician Tuukka Leppänen from Finland, and scriptwriter Hattie Naylor, actor-musician Laura Hanna and director Josephine Burton from the UK.

Our Festival is an annual chamber music festival specialising in unusual concert concepts, held around Tuusulanjärvi lake near Helsinki. Globe Art Point is an organisation established in 2016 to foster increased diversity in the field of arts and culture in Finland. It was a requirement for the residency that the team must include both members born in Finland and foreigners now resident in Finland.

Inspired by the tale of Marouf Majidi

The work was originally conceived in late 2017, when director Josephine Burton and musician Marouf Majidi met in Helsinki. Burton, in charge of the international Dash Arts organisation, was visiting the Baltic Circle festival and wanted to meet interesting musicians working in Finland. Iranian-born Marouf Majidi, who had ended up in Finland via Turkey in 2005, was on the list.

“We had a brief meeting over coffee and talked about the arts scene in Finland, about Brexit and about my past. Soon afterwards, Josephine contacted me again and said that we should do something based on my story,” says Majidi.

Dash Arts, headquartered in London, engages in broad international cultural projects designed to build bridges between branches of the arts, between cultures, between languages and between communities. The organisation had been working on a project focusing on Latin America, but Brexit changed the orientation of the organisation, and Burton turned her sights closer to home.

“Marouf’s story about how he found a niche for himself as a musician in Finland captivated me. I was already deep into thinking about European identity and whether there was a distinct sound of Europe. I wondered whether people arriving from the outside might help unlock this sound.” says Burton.

The key theme in the work is finding a place and an identity for oneself in a new culture and a new society. Soon after Majidi arrived in Finland, he entered the Glomas Master’s degree programme at the Sibelius Academy of the University of the Arts Helsinki, and he now makes music alongside native Finns in a number of ensembles. Nevertheless, issues of finding a place and an identity are still relevant for him.

“I felt like I was out of tune for a long time. It took time for me to rediscover myself in this new environment and to present the best version of myself. I was fortunate to be in the company of artists and fellow musicians at the University of the Arts, but it took years for me to feel that I was really in tune with them. When I finally felt that I was in tune and resonated with my environment, I had a chance to travel to the Middle East. And guess what: I was out of tune there. The culture where I was born was a strangely uncomfortable environment in which to practice art,” Majidi explains. 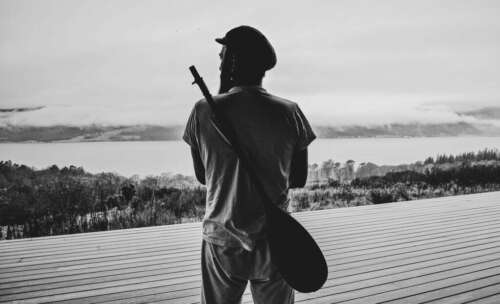 Deconstructing myths of Antiquity via Zoom

Burton spent a long time thinking about how to tell this story other than putting together an all-star pickup ensemble of immigrant musicians. The turning point came when she returned to Virgil’s Aeneid, which she had read when she was a student. It turned out that this epic from more than two millennia ago explored themes with surprisingly contemporary relevance.

“The title character, Aeneas, is a Trojan hero who arrives in Italy as an immigrant, finds a place for himself in Western Europe and becomes the founding father of the Roman Empire. This origin myth of Europe is, at its core, the story of an immigrant,” says Burton.

The work in progress employs drama and music to tell the story of Aeneas as a musician who arrives in the West and, in the process of trying to find a place for himself, encounters nationalism, hatred and mistrust but eventually wins over the locals. This is not just the story of Majidi or the story of Aeneas; anyone who has ever had to reorient themselves in a new environment can identify with it.

Much of the work has been done remotely. Burton and Majidi met again at Womex in Tampere in 2019 and continued to work on the idea. Having refined the concept for several years, they were scheduled to meet again in spring 2020, but that of course never happened. They continued to workshop the piece by Zoom but felt unable to wait for another year and eventually arranged a meeting in London in November 2020. Towards the end of the present month, Burton will be working on the production with two actors in London, focusing specifically on how to build the audience experience. Majidi will attend via Zoom.

The team members are eagerly looking forward to the residency period. The six-member team is intending to finalise the first part of the work in Finland, and the entire work will be completed in a series of residencies. The full premiere is planned to take place in the UK in autumn 2022, and the team hopes to find partners in Finland to facilitate a performance here.

We may only hope that the work will have a future at least as long as its gestation. “Why do we need ancient epics when we have our own Josephine and Marouf epic going on?” asks Burton with amusement, referring to the epic length of the creative process.