Helsinki-based composer Olli Virtaperko attained a physical outcome to a four-year project with the release of an album of three extensive concertos on the Ondine label in October 2017. The details of the Romer’s Gap disc are a fascinating reflection of Virtaperko’s entire career to date.

The common feature in the works by Olli Virtaperko (b. 1973) on the Romer’s Gap disc is that they all have an unusual twist. The story begins with an orchestral work commissioned by the Finnish Baroque Orchestra (FiBO), a project that was turned upside down by such a twist.

“It soon turned out that the resources available for the commissioned work would be less than envisioned,” Virtaperko recalls. “I had to make do with a Baroque orchestra smaller than the full ensemble, and the goalposts shifted. I began to search for a Plan B.”

A solution soon presented itself: Jonte Knif, a friend of Virtaperko’s and one of his go-to musicians, was at the time engaged in an ambitious instrument-building project. He was designing and building a vacuum tube analogue synthesizer, dubbed the knifonium.

“The sound world of the knifonium proved to be incredibly flexible, and I found myself thinking how useful the instrument could be in extending the tonal palette of an orchestra. I also know that Jonte would understand the particular musical requirements posed by Baroque instruments, as he is a multi-talented musician and a specialist in early music.”

This insight led Virtaperko into an adventurous four-year period whose twists and turns were eventually enshrined on the Romer’s Gap album.

“What a fun sound,” says an excited recorded voice over the chattering of the knifonium. “Yeah, I want this!”

Virtaperko recorded all of his encounters with Jonte Knif during the extensive groundwork for the concerto Ambrosian Delights. On these recordings, Knif demonstrates the sonorities produced by the instrument, resulting in occasional bursts of laughter from both men. “There’s something like this in Looney Tunes, isn’t there? On a steel guitar?”

Virtaperko explains that a lot of the samples demonstrated during these sessions ended up in the score of the concerto almost as is.

“It was all about the adventurous mind of a human being at play and about the joy of discovery,” says Virtaperko. “We were exploring new territory, with no holds barred.”

This was also true of the process of Virtaperko learning to know the instrument, a process that he always takes very seriously.

“At the time, we were using an unfinished version of the knifonium; some new knob would appear every week as Jonte tweaked the instrument. During the one-year process, I learned enough to leverage the potential of the knifonium on a superficial level. That was sufficient for writing the music and for coaching the professional musician playing the instrument.”

A similar learning process preceded the creation of the successor to Ambrosian Delight, titled Multikolor. This is a concerto for baritone saxophone and small chamber orchestra. The soloist was Joonatan Rautiola.

“The starting point for Multikolor was purely musical. The creative process was about writing absolute music – music that did not refer to anything beyond itself,” says Virtaperko.

The work makes use of a variety of extended techniques on the saxophone, such as multiphonics, where one or more additional pitches sound in addition to the fundamental.

“The world of multiphonics is utterly fascinating but very laborious for the composer. I had a sample of more than 100 multiphonics to choose from, and I eventually selected 23 that are used in the work. Their spectrum is of fundamental importance to the identity of the piece. I also encouraged Joonatan to improvise freely, which led to the discovery of several valuable ideas.”

It was like with Jonte Knif: both musicians unwittingly played a vital part in generating the musical material.

“I myself by default have no way of knowing what kind of things you can do with multiphonics on a baritone saxophone,” says Virtaperko. “But if I listen to the things that Joonatan does with his instrument for long enough, I can pick up enough to adapt what he does or use it as is. After all, that’s what being a composer is all about: selecting and adapting existing things to create sensible and balanced musical entities.”

Filling up the gap

Ambrosian Delights and Multikolor are in many ways diametrically opposed. While Ambrosian Delights is full of boyish enthusiasm and references to popular music, Multikolor is a serious artistic statement. The title work on the present disc, Romer’s Gap, emerged as a balancing link between these two extremes. It is a concerto for amplified cello and orchestra. The soloist was Perttu Kivilaakso, who plays with the well-known heavy metal cello ensemble Apocalyptica; his busy schedule forced the creative process into a different mould than that of the two previous concertos.

“I spent one day with Perttu and recorded it all on video,” explains Virtaperko. “That session told me which things are musically and instrumentally comfortable for Perttu. After that, we did not meet until I had finished the piece.”

Virtaperko acquired an arsenal of technology comparable to that used by Kivilaakso and spent a lot of time playing electric cello himself in his studio. The concerto thus emerged as a combination of the musicianship of both composer and soloist.

“The composition process was in some sense even more serious-minded than with Multikolor, because with the electric cello concerto I wanted to avoid blatant crossover and other populist elements.”

The recording of the concertos came about as a result of a collaboration with Ville Matvejeff, artistic director of the Turku Music Festival and chief conductor of the Jyväskylä Sinfonia.

“By the time I completed Romer’s Gap, the recording plan had been bandied about in general terms for a few years, but when Romer’s Gap was premiered I still had no concrete information about the recording.”

In the event, the first recording session was held only a few months later, in October and November 2016. “Ville Matvejeff has the ability to make things happen. In this case, it meant that in a very short space of time he organised things so that the recording process could begin. The final sessions were in early April, only about six months after the project was launched.”

All work (but with a healthy dose of play)

The concertos now released by Ondine received mixed reviews when they were premiered. Multikolor gained the most unanimous praise, while Ambrosian Delights, as expected, met with both avid enthusiasm and equally intense loathing. “I think it’s always a good thing if a piece is an opinion divider,” says the composer.

Reviews of Romer’s Gap have varied according to how well the balance of amplified cello and orchestra has worked in each case.

“For the recording, we redesigned the cello amplification system. We only recorded acoustic sounds in the hall; the amplified sound and effects were played in real time but in a separate, sound-proof room. Then we mixed everything together, and the end result was really very good.”

The Romer’s Gap disc is a technically marvellous realisation of Virtaperko’s busy four-year project, and it has been received with acclaim. It is also a portrait of the composer that in its details provides a surprisingly broad reflection of his entire career.

At the core of it is his love of Baroque music, acquired in the sound environment of his childhood home, but the titillating references to popular music hark back to the adolescent who found much of his musical education in the Levylaivuri second-hand record shop at Viiskulma in Helsinki and who discovered his passion for composing through the music of Frank Zappa. Another dimension is lent by the fact that Virtaperko spent part of his musical career as a member of Ultra Bra, which two decades ago was one of the brightest stars in the firmament of Finnish popular music (and will have an eagerly expected series of reunion concerts in December).

But underlying everything is the lesson that the young Virtaperko, naturally gifted and as such averse to making an effort, learned when he was an exchange student at the University of Edinburgh in 1993–1994: in order to get anything done, you must work hard.

That lesson has stayed with him to this day, and hence his calendar for the near future is commendably full. But it’s not all work and no play.

“The most curious of my upcoming projects is probably a work for two knifoniums and a third keyboard instrument where the second knifonium is controlled by a MIDI recorder,” says Virtaperko, with a flash of whimsy in his eye. 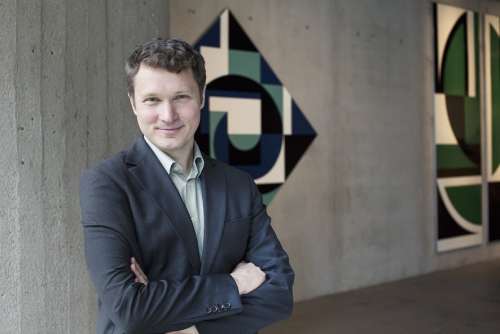 • Studied composition, the Baroque cello and early music performance practice at the University of Edinburgh and at the Sibelius Academy

• Artistic Director of The Tampere Biennale 2012 & 2014;Director of Ensemble Ambrosius since 1995; Composer/cellist of European Jazz Orchestra 2003

The Society of Finnish Composers has published a 13-part documentary series on Finnish composers. Olli Virtaperko is one of them.

Olli Virtaperko's Arctic viol book at the Musica nova Helsinki on 5 February 2019. Read more about the festival and its artists in FMQ.