Reports of the death of opera have been frequent since the Second World War, but as far as Finland is concerned they have been greatly exaggerated. Finnish opera is now doing better than ever, with some 20 new additions to the repertoire every year.

To be sure, the history of Finnish opera is short. Opera performances did not even properly get under way in Finland until the late 19th century, when the nationalist movement (Fennomans) initiated efforts to establish institutions to perform opera in Finnish. The first significant institutions, such as today’s Finnish National Opera and the Savonlinna Opera Festival, were established by Fennoman activists in the 1910s.

The first opera ever written in Finland was Kung Karls jakt [The Hunt of King Charles] by Fredrik Pacius, to a libretto in Swedish, premiered in 1852. Between then and 1974, about 90 operas were composed and premiered in Finland. The year 1975 is regarded as a turning point in Finnish opera, because it was then that two landmark works were premiered, Ratsumies [The Horseman] by Aulis Sallinen and Viimeiset kiusaukset [The Last Temptations] by Joonas Kokkonen, both of them accessible neo-tonal works featuring common Finnish people. The ‘Finnish opera boom’, as it came to be known, is considered to have begun here.

Now, in 2018, we need to add a new chapter to that history. Between 1975 and 1999, 123 operas were given their world premieres, bringing the grand total of all Finnish operas ever written to just over 200 by the turn of the millennium. This was followed by a huge surge, as the number of operas premiered between 2000 and 2017 was no less than 350! The peak came in 2017, with the celebration of the centenary of Finland’s independence: a staggering 28 operas saw the light of day in that year alone. Clearly the ‘opera boom’ has moved to the next level.

In terms of musical style, the spread of Finnish opera in the 2000s could not be wider. It ranges from simple, folk-style melodic writing with a small instrument ensemble or piano (such as the operas of Pentti Tynkkynen) to extreme virtuoso textures scored for large orchestra (such as the full-length operas of Kaija Saariaho).

In the late 1990s, the feeling was that contemporary classical music had become more pluralist than before, with all musical styles becoming acceptable. In the 2000s, however, the field was widened even further, in unprecedented and expansive ways, incorporating features such as digital sound processing and extended reality through visual techniques such as AR and 3D.

So what are the topics of all these new Finnish operas? Where and when are they being performed?

It is typical for Finland that opera performances are held not only in cities but also in small communities, in ordinary rural villages or at outdoor locations of national or local historical significance. This trend, which we may refer to as local opera, involves works usually rooted in the communities where they are performed and describing local historical or current events. Also, they are often created and produced by local forces, with or without added professional soloists, and the audiences are also largely local.

The most prolific composer of local operas is Pentti Tynkkynen, 11 of whose works have been performed in small communities around Finland. The opera Pula! Ooppera konikapinasta [Shortage! An Opera of the Horse Rebellion] (2004) by Ilkka Kuusisto – who turns 85 this year and has 19 operas to his credit – is based on the history of the family of opera singer Esa Ruuttunen in Nivala in northern Finland. One of the largest local opera projects in terms of scale was the multicultural opera trilogy written by Kaj Chydenius (2004–2009), performed at multiple locations in northern Finland and in Pajala in Sweden. 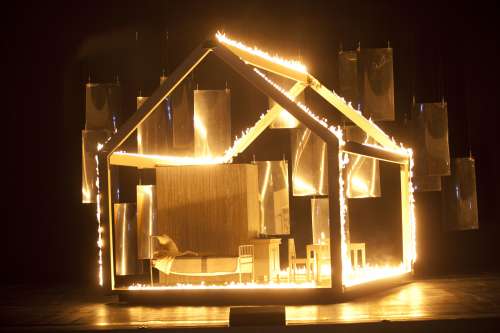 Subjects taken from the Finnish national epic, the Kalevala, from the Bible and from national history remain perennial favourites in Finnish opera.

Some two dozen operas based on the Kalevala have been written to date, and religious subjects are featured in several church operas such as Kolme kirjettä Laestadiukselle [Three Letters to Laestadius] by Jyrki Linjama, written to celebrate the 500th anniversary of the Reformation in 2017.

The firm national status of opera as an art form is apparent in that operas are frequently written to celebrate national occasions. For the 700th anniversary of Turku Cathedral, Mikko Heiniö was commissioned to write Riddaren och draken [The Knight and the Dragon] (2000), specifically to be performed in the Cathedral. The City of Oulu celebrated its 400th anniversary with Messenius ja Lucia [Messenius and Lucia] (2005) by Olli Kortekangas, who was also commissioned by the Finnish Parliament to write Isän tyttö [Daddy’s Girl] (2007) for the centenary of Finland’s parliamentary system.

The early 2000s saw the emergence of ‘hero-operas’, i.e. portraits of prominent national personages reflecting the history of the nation. There are numerous operas that fit into this genre, and the gallery of people featured is extensive, beginning with long-serving President Urho Kekkonen (1900–1986). Operas have been written about many famous artists, sportsmen, politicians and religious leaders – though surprisingly few about famous women, considering Finland’s track record in gender equality. The rare exceptions include Yksi siemen, yksi suru – keskustelua Aino Sibeliuksen kanssa [One seed, one sorrow – discussion with Aino Sibelius] (2015) by Riikka Talvitie and Seitsemän huivia [Seven Scarves] (1990) by Pekka Jalkanen, the latter being an opera about the life of kantele player and folk singer Kreeta Haapasalo.

As reported in this article, Finland has produced dozens of operas set in wartime. A new development in this sub-genre is operas depicting the Finnish Civil War of 1918, fuelled by its centenary in this year – although this is of course regarded as a commemoration rather than a celebration. In addition to Veljeni vartija [My Brother’s Keeper] (2018) by Olli Kortekangas, previously written up and reviewed in FMQ, the Civil War is reflected or at least touched upon in the melodrama Metsäkansan laulu [Song of the Forest People] (2018) by composer-conductor Leif Segerstam and the opera Kitusuon Sofia [Sofia of Kitusuo] (2017) by Jorma Panula and Erlend Jantsikene, premiered in the previous year. Yllätä ikuinen virta [Come, O Flow Eternal] (2018) by Sampsa Ertamo features composer Toivo Kuula (1883–1918), who was killed in a shooting incident in the aftermath of the Civil War.

Although subjects of national relevance remain dominant, a significant percentage of the operas written in the 2010s deal with current issues or with mundane and even trivial matters in today’s urban environments. A sampling of subjects employed in operas in the 2000s includes environmental problems, the economy, homosexuality, human trafficking, prostitution, sexual abuse of children, divorce, rootlessness, social exclusion, alcohol smuggling, rape and football hooliganism.

Most of the works with such a focus are serious in nature, but there are some comic operas in the mix too, such as Putkiremonttiooppera [Pipe & Drain Renovation Opera] (2011) by Matti Laiho or Kuntaliitosooppera [Municipal Merger Opera] (2011) by Tuomas Törmi. The most extreme example of immediate commentary on topical events in opera was Kenraali: Uutisooppera I [General: News Opera I] (2012) by Jukka Nykänen, which was created in a matter of weeks on June and July on the basis of leading items in the news and premiered in August. 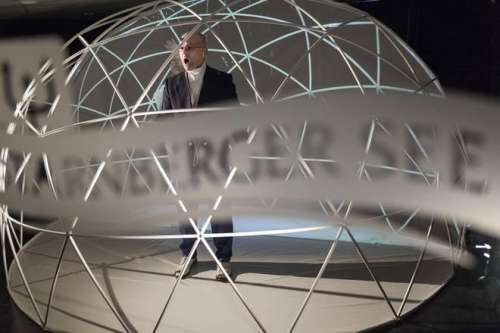 Opera in weird places and online

Operas of the 2000s may be either traditional drama operas or ‘post-operas’ rooted in post-dramatic theatre, where plot-driven narrative is meaningless and the expressive idiom is more theatrical than usual in opera.

Post-dramatic means are exploited in the performative art piece Sulkapallo-ooppera [Badminton Opera] (2005) with music by Max Savikangas and libretto, visualisation and staging by Teemu Mäki. This is probably the most experimental work in terms of its overall concept in the field of Finnish opera to date. It questions almost all of the conventions of traditional opera: libretto coherence, use of space, musical continuity and structures and the role of the singer. It also involves a broad streak of concept art and physical theatre, with human blood and naked actors.

Another kind of experimental music theatre may be found in the operas of Miika Hyytiäinen, ranging from miniatures originally designed to be viewed on a smartphone, such as Omnivore (released 2012), to expansive productions transcending the confines of a stage. His most recent opera, premiered at the Munich Biennale in 2018, is Königliche Membranwerke – Nomictic Solutions (2018), with locations several kilometres apart between which the audience was transported using buses and ships. Hyytiäinen has also experimented with 3D technology, as in Aikainen [Early] (2014).

In keeping with the tenets of the welfare state, in Finland culture is seen as belonging to everyone, children included. At the turn of the millennium, professionals in classical music realised that new audiences must be solicited in order to ensure a future for the genre. Although children’s operas are not a new thing in Finland, they have come into particular focus in the 2000s.

Of all the operas written in Finland since 2000, over 20% are for children – not dumbed-down editions or rock-pop versions of the classics, but actual new operas specifically designed for child audiences.

Environmental concerns are a major trend in Finnish children’s operas of the 2000s. The Savonlinna Opera Festival premiered an opera about the endangered Saimaa ringed seal, Norppaooppera [Seal Opera] (2013), by Timo-Juhani Kyllönen. Karoliina Kihokin kommervenkit [The Shenanigans of Susan Sundew] by Charlotta Kivistö focuses on bogland protection, and Metsäooppera [Forest Opera] (2010) by Pentti Tynkkynen contemplates the impacts of climate change. Accepting diversity is another major trend, as in Suomalainen tapiiri [The Finnish Tapir] (2004) by Jouko Linjama and Arabian jänis [Arabian Hare] (2004) by Seppo Pohjola.