Born of birch and handicraft, Kumu drums are earning fans around the world.

One of Europe’s only drum makers, Pekka Helanen, has a devoted client base worldwide. Working solo in a small workshop near Hämeenlinna, he makes custom sets for drummers in metal bands, symphony orchestras and marching bands. Kumu clients include most of the top Finnish drummers plus international pros who have backed stars like Eric Clapton, Branford Marsalis and Janis Joplin.

Helanen makes drums using his own unique technique, honed over 35 years in the business. That includes active work as a musician.

“I think it’s important to play my own drums so I can try out new ideas. I never studied music or design. I’m a self-made guy. I’ve always been very curious about how things work,” he says in his soft-spoken, modest manner.

As a youngster, Helanen was one of those kids who loved to take things apart to see how they worked. “I made my first drum when I was around 10. It was square, made out of wooden boards with cardboard heads, and kettle lids as cymbals. I whittled the drumsticks from birch,” he recalls. “A couple of years later I bought a small kit with help from my mother. I took the heads off and looked at how they were made. Some years later, I started to wonder whether there was a better way to do it,” Helanen says.

Hendrix in the sauna

Helanen and a friend practiced Jimi Hendrix tunes in a sauna before playing their first gigs around age 13 in 1974. By now he had graduated to a Yamaha set.

By the early ‘80s, he was playing mandolin and bass in an Irish folk group and milking the goats on his small family farm. He then moved into a former school in Iittala, where he started an instrument workshop called Kunikunda. He made and repaired guitars, basses, mandolins, traditional Finnish kanteles and jouhikkos. Helanen also began tuning and repairing pianos, skills learned from his father, who worked at an organ factory.

He kept this all up after moving back to Hämeenlinna in 1986, while still playing in bands and tinkering with drum construction.

“Since there was no internet, I looked at stories about factory tours in drum magazines and studied the little black-and-white photos to see what was in the background, what tools and things, and tried to figure out how they made them.” 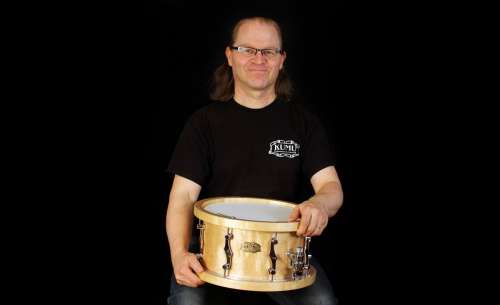 Helanen invented his own process, just as designer Alvar Aalto came up with his own technique for bending birch strips for furniture back in the 1930s.

By the early 1990s, he perfected the use of moulds in making drums and hoops. Since nothing was available, he designed and built all the equipment himself. “I glue very thin layers of birch and put them in the mould to curl it. There are different shell thicknesses, but 3.8mm four-ply is the most popular. It has a very low note compared to the 6-ply, 6mm one, which goes higher.”

“Designing the shell is a balance between sensitivity and toughness,” Helanen explains. “It has to keep its shape and withstand humidity, temperature and bumps and all that, but it also has to be thin enough to bring out the best sound. A thinner shell resonates better when you play it softly and has warmer, deeper mid-range frequencies.”

Within a few years of perfecting the system, he focused solely on drums. In the late ‘90s he simplified the company name to Kumu (boom or rumble), which echoes the warm sound of his instruments.

This year, after more than three decades in Hämeenlinna, Helanen moved into a small rural workshop with his son, who makes furniture and sometimes helps out with the drums. “Mainly this is a one-man show, though,” he says.

While he makes all the wooden parts himself, the metal parts are subcontracted, and the heads are sourced from the US according to customer choice, with Remo being the most popular brand. He adds his own logo, with the name on a curling piece of birch bark.

“All my wood is made especially to my specs by the Koskisen Group. It's all PEFC and FSC certified wood from responsibly managed forests. Luckily Finnish birch still grows OK, but it's not easy to find the super quality that I need.” While maple is also popular, he insists that “Finnish birch is the best for making drums.”

In Finland, the birch holds a central place in folklore and heritage. As the forested country’s most common hardwood, it’s traditionally been used for making everything from furniture and tools to skis and sauna whisks.

“Finnish birch is very durable, so drummers have no problems even when they go to Lapland, or whenever the temperature or humidity changes. Some of the ones made 35 years ago are still being played. Also birch is so light coloured that you can add any colour and it looks so great.” He has made hundreds of drums in a rainbow of colours and patterns, some with metallic paint and one using lace as a stencil, made for Janne Haavisto.

A 3-headed bass drum, anyone?

The fact that they are custom-made is part of what makes Kumu drums unique.

“Besides the looks, you can choose the depths of all the drums as well as the diameter and how they’re combined. Some people want the front tom or bass drum to be deeper or shallower. For instance, if you play jazz, it might be the 18” bass with 12” and 14” toms. The most popular size is the 20”, as well as the 22”, especially for rock.”

His most unusual design so far is the world’s only three-headed bass drum, which has been used by Anssi Nykänen, another leading session drummer. “In the studio you can put mikes in both resonance cases and tune them differently. It’s difficult to move around though. But Anssi loves it!,” says Helanen.

He even makes some old-fashioned drums with rope tension and no metal parts, suitable for marching bands. Indeed, his customers range from military bands to symphony orchestras, from pop, rock, metal and jazz musicians to the Sibelius Academy.

What makes these drums distinctive?

“Besides the Finnish birch, people love our little wood-covered lugs. The footprint is small compared to traditional lugs, which can dampen the resonance of the tom. And they have a distinctive shape that drummers recognise, even from far away.”

Helanen says no-one else is making drums in similar way, but is not worried about being copied.

“This is such hard work that I don’t believe someone else would do it,” he says. “But they can try!” Just to be safe, though, he does not allow any visits to or photos of his workroom. 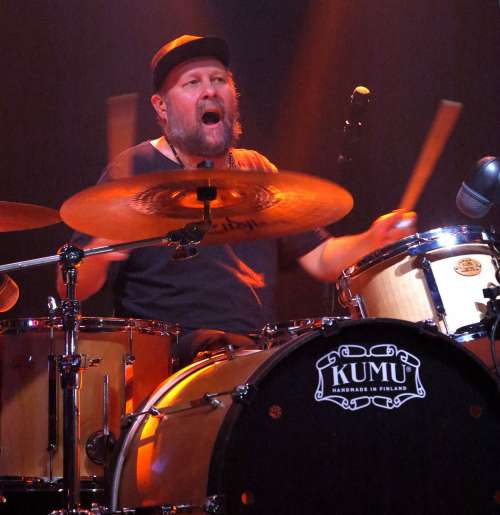 Kumu drums are standard workhorses for Finland’s top session drummers, such as Sami Kuoppamäki, who plays with Von Hertzen Brothers, Kingston Wall and many other acts.

“I never get tired of the sound, the cosy warmth and original response of this set – it’s my own rhythmic ecosystem,” says Kuoppamäki. “In addition to many wooden innovations and quality, I’ve been extremely happy with snares made of COB (chrome over brass) and stone. I’ve had a StonEdge-snare (6.5” deep) since the first was made about 10 years ago. It’s a perfect weapon for all kinds of surroundings,” he says.

Another of Finland’s most in-demand drummers is Janne Haavisto, known for his work with pop-rock veteran J. Karjalainen and surf band Laika & the Cosmonauts. He says he’s always appreciated Kumu’s craftsmanship and style – and the possibilities of working directly with the designer.

“Pekka is always open to new ideas and you can trust that you’ll get what you’re looking for,” says Haavisto, who has a compact travel kit, a regular pop set and a seven-piece 1970’s style "concert tom" set. “I also have a pair of prototype bongos, four different snare drums – one with wooden rims, a metal one, a fat stone snare and your basic snare – plus a 14" bass drum/snare,” he explains. “Luckily Pekka and I are still planning some new things – just can’t get enough Kumu!”

Kumu’s foreign fans include Dave Getz of the legendary San Francisco rock bands Big Brother and the Holding Company and Country Joe and the Fish, who nowadays plays more jazz.

During a 2014 tour of Finland, he enjoyed playing a four-piece Kumu rock kit and then visited Helanen’s workshop where he “fell in love with” and ordered a Kumu jazz kit.

“I suspect that the Finnish birch might be particularly excellent for sound,” says Getz. “It's still the kit I use for all my local gigs, both jazz and rock; I can change between clear and coated heads for tonal control. The snare is particularly awesome and I've received many compliments on it from other drummers. People have also noticed and commented on the craftsmanship and details, like the way the lugs are covered with matching wood, a nice touch.”

Other customers have included Rocky Bryant, who plays with Branford Marsalis and Dianne Reeves, as well as British drummer Steve Ferrone of Tom Petty’s band, who’s also worked with George Harrison, Chaka Khan, Paul Simon, Eric Clapton and Johnny Cash. Still, Helanen has no grand plans for globalisation. He sometimes presents his drums at international music fairs, and is represented by dealers in Cologne and Chicago. He’s not interested in mass marketing or production, though, preferring to keep things small so he can personally hand-build every drum to the buyer’s specifications.

“I don’t dream about having a bigger factory,” he says on his website. “Individual service, small series and the enjoyable pace of working suit me the best. The love for music and its power form the foundation of this work, which has grown into a way of life.”