Antye Greie-Ripatti, an artist whose work spans many genres and continents, hosts a sonic experimentation workshop for children in Helsinki in late June. “Listening and sound should be taught at an early age, as well as the creative use of technology – and critical, resistant thinking about it,” she says.

Multimedia artist Antye Greie-Ripatti (whose artist name is AGF) is hard to pin down, describing herself as an “audio sculptress, poetess and new media artist who utilises language, electronics, field recordings, and politics and explores speech within the audible depths of anti-rhythmic post-internet assemblages.”

“My work,” she says, “focuses on exploring the relationship between language, voice, sound, humanity and the machine.”

Born in East Germany, she is now based on Hailuoto, an island with a population of less than 1,000 near Oulu, northern Finland.

In 2011 she established the Hai Art organisation there, focused on sound in public and social spaces. Projects have included an iPad Orchestra and a sound sculpture and app called Sound Map Hailuoto, which was followed by a similar one in the eastern town of Kuopio.

Despite being based on a relatively remote northern island, she frequently collaborates on international projects, often with a strongly political angle. Greie-Ripatti has teamed up with fellow activist-artists as University of Edinburgh historian Angela Dimitrakaki, Palestinian poet Dareen Tatour and Paris-based Afghan performance artist Kubra Khademi.

On Hailuoto, she has led workshops through University of the Arts Helsinki and the EU-funded Residency Network for Music, Sound and Culture (Soccos). In one of these, a group of international sound students spent a week of micro-residence at a house in Hailuoto and eventually performed a 10-minute piece using the entire house as an instrument.

Antye Greie-Ripatti also leads projects through the Finnish Bioart Society, which aims to bring together art and natural sciences with an emphasis on biology, ecology and life sciences.

This includes work with children focused on outdoor site-specific listening, making field recordings and the creation of soundscapes, sound art and improvisation.

In late June, she leads Sonic City Ecologies, a free three-day field recording workshop in English, based at the Bioart Society’s SOLU Space art lab in Helsinki’s seaside Katajanokka district. It aimed at youngsters of all skill levels aged 10-14. In the workshop, she says, participants will practice ways of experimenting with listening, recording and making soundscapes with readily available equipment.

During the workshop, the participants will learn about the global community dedicated to field recording, phonography and the art of listening. The recordings and results will be published as a soundscape on the Bioart SoundCloud and website.

Before the workshop, FMQ caught up with Greie-Ripatti to find out more about the workshop and her views on sound and art.

How has the proliferation of smartphones and tablets changed people’s relationship to recording and reproducing sound?

“There’s great potential, but it also becomes evident that no one has audio skills. We don’t learn them in school. Kids still learn things like when Mozart was born, but not how to use an equaliser or microphone. That has to change in our time, because audio is everywhere, with podcasts, videos and so on.

“It’s not rocket science to make a good recording, but one has to learn a little. I’d love to help develop a curriculum for children to learn listening and recording. There is a lot of interesting literature that argues that auditory skills are also a path toward navigating messy spaces, mental health and so on.

“Listening and sound should be taught at an early age, as well as the creative use of technology – and critical, resistant thinking about it. Listening does that well. It’s one of the most fundamental things we do.

“I’m convinced that the next generations will go back to sonic intelligence. Humans have developed hearing since the beginning of our time. It was integral to survival. The visual culture of the last few hundred years has perhaps not been beneficial for us in supporting our survival, because we don’t listen anymore.”

Which sound apps and mobile music tools do you use most in these workshops or recommend for children or others experimenting on their own?

“I recommend a very fun, simple but genius app developed by MIT Media Lab called Singing Fingers. It lets you record your surroundings by just touching and drawing, then play it back, make music with it and play it in fun ways.” 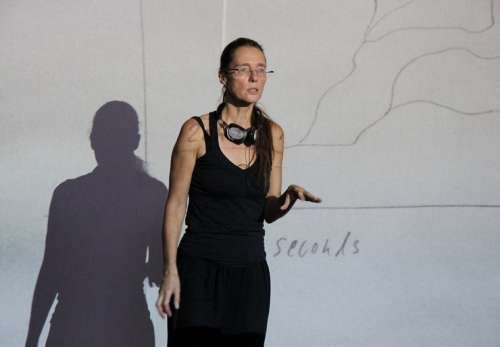 But what is the boundary between creating soundscapes or sound art and music – or is there one?

“The most beautiful thing about art is that there does not need to be truth, as opposed to journalism or science, for example. Art, music and soundscapes can be anything. Many people have written books and PhD dissertations about one or the other, or built schools around this or that. I personally don’t care, but think the listening soundspace in our bodies is an important subject for scientific research.

“Sound art is an artform that exhibits special phenomena about the sonic space and listening. Soundscapes are the spaces we’re in. For example if I’m at an airport with random Muzak coming out of speakers – representing everything that’s wrong with music and the music business – and the sounds of people working, chatter, planes…. when I close my eyes, it’s a soundscape. Even if someone’s drilling, I prefer the drilling to the music from the speakers."

In your own creative work, where do you draw the line between songwriting and other audio production?

“I don’t draw any lines; I do what needs to be done. Nothing is independent from each other. Of course if I write or design or program something for a specific reason, I approach it differently, according to the context. But quite often it includes all these things, even on my solo records, where I can do whatever I want. “Music is a complete world on its own. It’s metaphysical, deep and personal – and it can save lives, in my opinion.”

Antye Greie-Ripatti releases her own experimental, ambient-oriented music via SoundCloud under the name AGF. She cites influences such as musique concrète, glitch and noise, as well as the work of Björk and Laurie Anderson.