PREVIOUS ARTICLES FOLLOWING ARTICLES
"Witnessing the well-oiled production machinery of the FNB at work, one can sense that every creative contributor has had enough space and responsibility to dispel any need for power struggles or artistic compromises. The goal was reached through a common effort."

When we consider what to name a triple bill of ballet, Made in Germany would be ironic and Made in the USA would be suspect. What should we think, then, of a ballet production titled Tripla: Made in Finland? Marking one of the high points of the centenary of the Finnish National Ballet, Tripla brings to the stage new works by three internationally successful Finnish choreographers, and the aforementioned title subsumes a multitude of identities. Ultimately, the most proudly Finnish thing about the evening is how utterly seamlessly the dance, music and staging work together.

The triple bills staged by the FNB commonly highlight the plurality of contemporary dance rather than a common narrative, and the very diversity of the backgrounds of the choreographers selected for Made in Finland in itself reflects the international biography of Finnish contemporary dance. Johanna Nuutinen (b. 1983) is a former member of the FNB and a world citizen in today’s generation of dancers; Kenneth Kvarnström (b. 1963) has made a career out of cross-discipline stage works with Scandinavia’s finest dance companies; and his contemporary Tero Saarinen (b. 1964) has a brutally beautiful idiom of absolute movement that has gone over well particularly in central Europe. 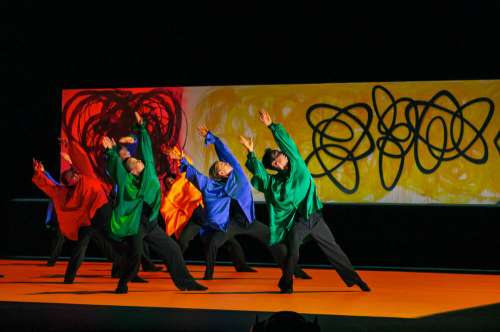 In this narrative, the opening number – Nuutinen’s Surge – feels unabashedly Finnish. This impression is created by the archaic primeval fog on stage but even more so by the music. The harmonies cultivated by composer Lauri Porra stem directly from his great-grandfather Sibelius, likewise the orchestration complete with brass swells and his organic treatment of structures. Porra’s orchestral texture also blends organically with the soft but precise tones of the electronic music created by Tuomas Norvio. Norvio is the go-to person for sound design in Finland today, and this is another reason why the soundscape in Hyöky feels so familiar – the thin veneer of 2020s trendiness cannot hide the underlying strong national colours.

The natural, seamless music creates just the right sort of conflict with Nuutinen’s dance narrative, with its abrupt transitions and criticism of consumerism. In her movement language, reaching out to grasp material things morphs into throwing things away and reaching out to other people, but another layer is added by the costumes designed by Erika Turunen, in which each dancer resembles a freshly opened package, new but having already lost its novelty value.

The next item on the bill, Bolero 2.0 by Kvarnström, scrubs away the national-mythical imagery with its visual impact, combining 1970s studio sets with brightly coloured silk tunics. Ravel’s Bolero seems an odd choice for a dance work, given that it only has one dimension, but Kvarnström makes breezy use of it.

Initially, the dancers resemble nothing as much as furniture in a foyer, with only occasional, random movements. As the Bolero escalates, the movement language gains edginess, the costumes get bigger and brighter, the graphic elements in the live painting grow stronger, and words are projected onto the stage as if to remind us that Kvarnström is always about a comprehensive artwork, not just dance. But the work goes no deeper than this – a devastating message in the context of Finnish art, where there is always an unspoken insistence to express something really deep and profound. Boldly brutal yet all-embracing and uncomplicated, this comes across as a healthily non-national artwork. 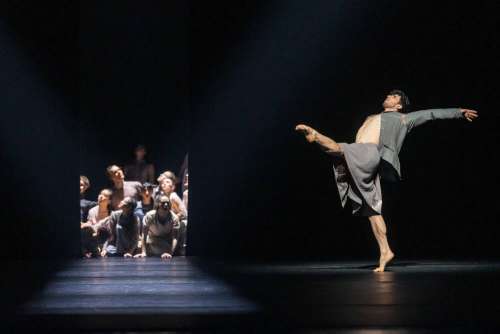 The evening concludes with Wedge by Tero Saarinen, which is set to and based on the Cello Concerto (2017) of composer and conductor Esa-Pekka Salonen (b. 1958). Performed often and recorded multiple times, Salonen’s Cello Concerto is an intense work of musical extremes where powerful directionality combines with sizzling details and ethereal soundscapes are juxtaposed with robust physicality. Saarinen moves his large group of dancers accordingly: their lines twist and break, groups are wedged apart or pushed to the ground, and yet every individual has their own movements as part of the whole. The austere but effective lighting designed by Joonas Tikkanen supports Saarinen’s abstract conception, whose symphonic nature is easy enough to identify with whatever we may consider is Finnish in the context of classical music.

Or not. Ultimately, the works included in Made in Finland refuse to form part of a coherent single narrative, and the title is little more than a superficial marketing ploy, as titles always are. If we must find something overarchingly Finnish here, then let’s decide that in this instance it has to do with the non-hierarchic collaboration between choreographers, composers, set designers and costume designers. Witnessing the well-oiled production machinery of the FNB at work, one can sense that every creative contributor has had enough space and responsibility to dispel any need for power struggles or artistic compromises. The goal was reached through a common effort. And indeed the very fact that a collaboration such as this allows sufficient space for an auteur like Kvarnström shows that the FNB is well prepared for its next century, a time of even greater pluralism.

Tripla: Made in Finland