Five concerts, all sold out – and a queue of hundreds of people who had to be excluded from the final concert. No one can say there is no demand for music like this! When Ali Haithem emigrated from Iraq to Finland in 2015, he did not know anyone in Helsinki but often spent time at the Music Centre café in order to get to know people. Four years later, he was in Camerata hall in the same building playing the oud with the Middle Eastern Orchestra that he had founded.

Founded by Ali Haithem in 2019, the Middle Eastern Orchestra is a collection of nearly 35 musicians from all around the world. They are enthusiastic to explore this particular music, which for some of them was previously completely unknown.

In the Middle East, music is driven principally by melody and rhythm, and even in a large orchestra the main focus is on bringing together instrumental colours in the service of melody. Based in Helsinki, the Middle Eastern Orchestra does not strive for authenticity in its performances of music from the Middle East; they have introduced elements that are more familiar to Western listeners. They arrange their music themselves and boldly incorporate harmony, a concept not traditionally found in the music of the Middle East.

This kind of orchestra is rare in Europe, as similar ones currently only exist in Germany and the UK.

First you have to find an audience

A key person in the orchestra project is Lotta-Maria Pitkänen, a versatile Finnish violinist who is extensively familiar with Arabic music and has performed with Ali Haithem for many years, for instance in Baghdad Band, which was formed by Iraqi musicians. Pitkänen was involved in the genesis of the Middle Eastern Orchestra from the start as a sparring partner, leader, coach and arranger.

“When I came to Finland, I didn’t even have an instrument,” says Ali Haithem, who has been playing the oud (a type of lute) since the age of 10. “After I got an instrument, I mainly played Arabic music at private functions and in restaurants and with Oriental dancers. When I got acquainted with Finnish musicians, such as Lotta, I invited them to join Baghdad Band, where all the other musicians had come to Finland as refugees.”

But Ali had bigger fish to fry and gradually set about pursuing his dream. When he was granted a residence permit after two years of waiting, things began to happen. “It was in 2018 that I got serious about my dream of founding an orchestra, but I thought that first you have to find an audience. So I performed once a month at the Ihana café, and after a while people began to show up to make music with me and to listen.”

The orchestra project began to move forward late in 2018, and the group gave its first concert at the Cultural Centre Caisa in April 2019. Interest was considerable from the very first: the concert was sold out, and dozens of people had to be turned away.

“Finns tend to work only with Finns. Our members come from Finland, South America, China, Morocco, Iran, Iraq, Jordan, and so on.”

Finnish musicians were not very familiar with Arabic music, with its intricate microintervals. Arabic music was the starting point for the orchestra, but the aim is to expand the repertoire to cover the Middle East more broadly. 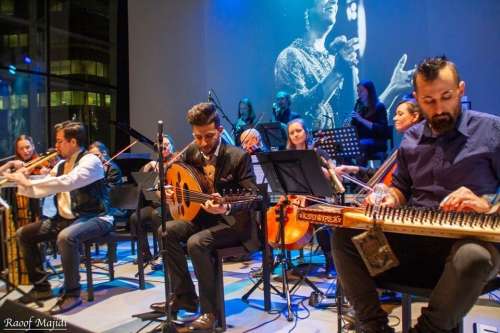 “We began with pieces that I already knew well, standard Arabic repertoire that people often play in Arabic music jam sessions here,” says Lotta-Maria Pitkänen. “In arranging this music, I introduce Western elements into it. I’m pretty much a harmony-driven person, although of course I have to respect the fact that this music is exclusively melody-driven. Some pieces may have exceptionally long melodic arcs, during which you can do all sorts of things with the harmony. Western music is punctuated by cadences much more than Middle Eastern music, where the melody is also very closely tied to the rhythm.”

“When I arrange a piece, I play the melody on the piano and try out various types of harmony. Sometimes I just use open fifths if thirds create too much of a conflict. Mostly I use triads, very rarely seventh chords. Then we build the orchestration according to the harmony.”

The orchestra includes a variety of Western instruments: strings and winds, and also accordion, piano, guitar and drum kit. Middle Eastern tonal colour is lent by the ney (a flute), the zither-like qanun, Ali’s oud and the percussion instruments riq and darbuka. Conductor Kaapo Ijas keeps the whole outfit together.

“Many of the members do not read music,” says Lotta-Maria Pitkänen. “In Arabic orchestras, the instrumentalists always follow the singer, and the performance can quite freely jump from one section of a song to the next, as everyone is familiar with the structure of the piece and can follow each other.”

In the Middle Eastern Orchestra, the pieces have predetermined arrangements, so the musicians who do not read music have to memorise the structure of the piece and learn to use new tools like rehearsal figures so that everyone knows where they are at all times. Pitkänen also explains that she wanted to bring microintervals into the mix.

“It took some time to encourage the musicians to do it and to satisfy Ali, because he’s very critical about these things. You have to learn to perceive microintervals, to understand where to play them and how. It’s a bit like you play a minor third out of tune when you’re a child until you understand how it’s supposed to sound relative to everything else.”

The Middle Eastern Orchestra's concert in Helsinki on 17 May, 2019.

When he was still living in Baghdad, Ali Haithem played with several prominent orchestras, which is where he acquired his solid knowledge of traditional music. He also studied at university, completing a Bachelor in Physics and Mechanical Engineering degree. When he came to Finland, he did not know enough English to be able to apply for the Sibelius Academy. His English is now much better, and he is considering formal music studies in Finland.

Haithem is only 27 years old, and he dreams on. He hopes one day to teach Arabic music at the Sibelius Academy – he feels there is no teacher for this at the moment. Many alumni and students of the Sibelius Academy’s Global Music degree programme have gravitated to the Middle Eastern Orchestra in order to learn more about this music. Some members live elsewhere in Europe and travel to Finland to perform with the group.

“I would like the orchestra to be even bigger. I try to give the audience something new in every concert,” Ali Haithem describes his vision.

On 5 September 2020, he will organise a festival of Middle Eastern music at the Savoy Theatre, including a Finnish choir that he has taught to sing Arabic songs.

“The only problem is money, but lack of funding doesn’t stop me. We have a saying in Arabic: If you want something, don’t look around. If you want sun, don’t look at the shadows. I try to focus my thoughts on the music.”

One simply has to be crazy in a positive way to launch such a project without any funding to speak of. It costs money to hire professional musicians and to commission arrangements. So far, Ali Haithem has been paying out of his own pocket, from earnings he makes in his job as a cleaner. One can only admire the energy that he puts into his visions and into realising his projects.

“I can’t stop creating new things. There’s a lot still to be done with this music, and I have a lot of energy. In Iraq, I saw dead bodies and experienced bombings every day. The police stopped and questioned you if you went walking in the city with an instrument. I don’t know about tomorrow, so let’s make it today.”

“When Iraq is in the news, it’s usually about war or politics. No one ever tells you that there’s good music in Iraq! I want to tell people something different about the Middle East.”