Mirjam Helin faced the sort of injustices that the world is at last trying to banish forever, but the Finnish singer’s sacrifice has proved priceless for the generations that have followed her.

What is the most precious gift a musician can offer the world? The pleasure of listening to a dazzling performance? Revelations on love and life hewn from the music and composers they perform? Or the determination to see new talent given the opportunity to flourish, in order that we might all experience those things with more frequency and intensity?

Such questions must have occupied the soprano Mirjam Helin (1911-2006) in the latter half of the twentieth century. Few know the precise reasons why this determined Finn stopped singing before her professional career took off, but pressure from the dominant men in her family might have contributed to her decision. Either way, Helin found her true vocation at the Sibelius Academy, where she discovered that nurturing other, less experienced musicians could prove sufficiently nourishing for any artist.

Still, it wasn’t quite enough. As most Finns know, Helin took a gamble in 1981, her seventieth birthday year. She telephoned the Finnish Cultural Foundation with a proposition and the offer of a large amount of cash. There were strings attached to her plan. The singing competition she proposed should be established would have a unique constitution, safeguarding it from the mistakes being made by others. Singers and only singers would sit on its jury. Oratorio, lieder and early music would be compulsory components alongside romantic opera. Every contestant would sing at least one work by a Finnish composer. The participants themselves would be the principal beneficiaries, whether victorious or not.

Helin got her way. The competition she founded was first presented in 1984, since which time its prizewinners have included Elīna Garanča, René Pape, Nadine Sierra and Julia Lezhneva. On 20-29 May 2019, some 60 young singers will appear in Helsinki for the public heats of the five-yearly Mirjam Helin International Singing Competition presented at Musiikkitalo. But they won’t be the only talented singers in town.

Helping them, rather than simply judging them, will be a jury comprising some of the biggest voices in the business. They belong to, among others, Olaf Bär (a former Helin prizewinner), Kiri Te Kanawa, Deborah Polaski, Ben Heppner and Waltraud Meier.

“Mirjam was adamant that everything in this competition adhere to a certain level of excellence,” says Marja-Leena Pétas-Arjava, the competition ’s current Executive Director and Helin’s grand niece; “that meant everything from accompanists, venues and management to prizes and the jury.” 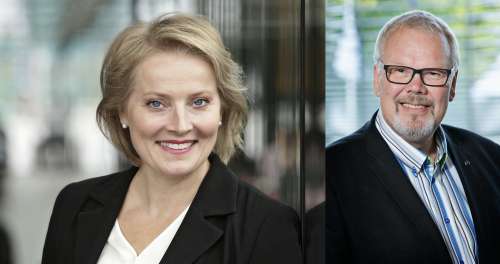 In 2019, the jury will be chaired for the third time by the Finnish tenor Jorma Silvasti (the Artistic Director of the Savonlinna Opera Festival), who underlines the difference in having a panel comprised exclusively of singers. “I have noticed that the decisions of a jury are totally different when the members are only singers,” he tells me. “On other juries made up of managers and opera house executives, engagement with technical matters is often not a high priority. These are things that are central to the Mirjam Helin Competition, both in the judging process and the other activities the jury are involved in over the course of the week.”

Those activities include master-classes for singers who do not proceed to the final, in which jury members work with non-proceeding semi-finalists on helping to correct or realign technical issues while generally offering advice and encouragement. They also include the so-called Singers Studio, in which jury members present themselves before contestants and the public for a general consultation and Q&A session. They also underpin the ongoing relationship with the four finalists in each category, male and female, who maintain contact with the competition management long after the festivities have ended in Finland.

The idea of maintaining contact with singers on their own terms, irrespective of their level of success in the competition, was born of Mirjam Helin’s ideals and actions. “Mirjam wasn’t just interested in the winners,” says Jorma Silvasti, who was himself on the receiving end of her generosity early in a career that took him to the Vienna Staatsoper and the Met in New York. “She would travel to meet singers who had been in the competition even if they hadn’t made the final. She wanted to support them in whatever way she could and was constantly interested.”

But for all her generosity, Helin’s uncompromising principles remained steadfast – especially when it came to matters of vocal training. “I hesitate to say it,” says Silvasti, “but she knew that some singers could be lazy; that some are aiming for the opera house and want to skip their Bach.” “Her idea,” continues Pétas-Arjava, “was that a good singer had a broad base of knowledge – that you can specialize later on in your career but if you’re concentrating solely on lied, oratorio or opera repertoire early in your career then you’re really only moving forward with one leg.”

“Mirjam Helin's idea was that a good singer had a broad base of knowledge – that you can specialize later on in your career but if you’re concentrating solely on lied, oratorio or opera repertoire early in your career then you’re really only moving forward with one leg.”

As such, the competition’s demands remain as broad as they do testing. “We still believe in this breadth, and its effect is to bring excellent singers to the competition who have a genuine chance of having significant international careers,” says Pétas-Arjava. The singers fulfill their part of Helin’s bargain by coming to Helsinki armed with eight prepared works including a Finnish song, oratorio or Mass movements, a work from before 1760, a song from the German lied tradition, opera arias and two works with orchestra should they prove fortunate enough to meet Hannu Lintu and the Finnish Radio Symphony Orchestra in the final. Whatever their choices, they must perform works in at least three different languages.

Finland had not the global reputation for exporting classical music talent in the 1970s and 80s that it enjoys now. “At that time, only a few individuals knew what was the standard in Europe and America or what it was demanded to be an international star,” says Pétas-Arjava. The country’s domestic operatic landscape was literally different, too. For the first two competitions, the Opera House on Töölönlahti bay had yet to be built; the National Opera was still based at the Alexander Theatre on Bulevardi.

In the pre-internet age, Helin was well aware of the benefits that would come with swathes of international singing talent visiting Helsinki. “You can observe the same in her own career and her dedication to pedagogy,” says Pétas-Arjava. “Mirjam travelled abroad to hear great singers and bring the lessons and techniques she encountered back home. This is partly what laid such strong foundations for the vocal department at the Sibelius Academy of which she was a part.” Pétas-Arjava should know; she studied singing at the institution herself and worked later in the administration of its faculty.

These days, there is traffic flowing in the other direction. Finland’s state broadcaster YLE transmits every minute of the competition, much of which can be followed anywhere in the world via a live web-stream. “That sort of visibility means you have already won if you’ve been selected from nearly 500 applicants to come to Helsinki,” says Pétas-Arjava; “it’s worldwide. The singers immediately have professionally-produced broadcast material they can use for their own promotion – a virtual CV.”

The excitement of a competitive event broadcast from the photogenic Musiikkitalo might get pulses racing, but there is even more significance to the exposure such coverage gives to Finnish repertoire – music Helin insisted be a part of the competition’s diet but probably never envisaged would be exposed to the audience the internet can deliver. “That was one of Mirjam’s principles, and of course the repertoire available to contestants ranges from Oskar Merikanto and Sibelius up to Magnus Lindberg and Kaija Saariaho. In the past we have compiled catalogues of works for contestants to browse, with translations and transpositions.” 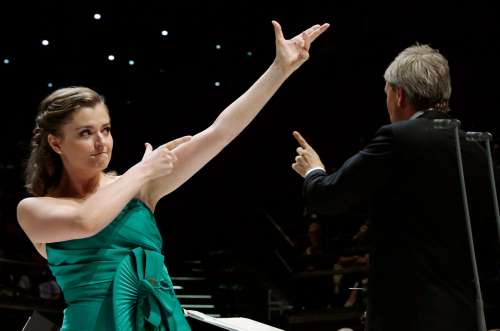 The winner of the first prize for women 2014, Kateryna Kasper (Ukraine), performing with the FRSO and Hannu Lintu.
Photo: Heikki Tuuli

The beginning, not the end

Much like Helin’s pedagogical theories, her competition was designed to harbour international impulses in the service of domestic music life, irrespective of the number of Finns in the competition or its final.

Helsinki and Oulu might get their taste of live performances from top young singers, but for the singers themselves the week in May is the beginning of their relationship with the competition and this country, not the end. Pétas-Arjava is the architect of a burgeoning professional development programme that links singers with partners in Finland (including the Finnish National Opera and the record label Ondine) and concert promoters as far away as Tokyo and Lisbon. In 1984, finalist Dilbèr Yunus from China never went home, remaining in Finland becoming a member of the Finnish National Opera.

If the competition works as it should, says Pétas-Arjava, the singers in question will be ready for their exposure. “We’re searching for the best singers,” she says plainly. “This is not a talent contest. We’re looking for artists ready to step onto the international stage and you see that in laureates like Beomjim Kim and Julia Lezhneva.”

Silvasti expands on that. “Every singer has different strengths and sometimes you get someone with an outstanding voice but not so much to say artistically. That’s the balance we’re looking for but it’s also the opportunity of the competition: if you’re a real artist, you can expect to have some serious success here.”

Mirjam Helin built her competition with the sort of generosity and strength of vision that were scarce in the early days of her own career. But if the result of one talent being stifled was that dozens more might flourish, her sacrifice seems worthwhile. The legacy it has given to the art of singing, in Finland and the world, is priceless and unique.

The competition is organised in Helsinki on May 20-29, 2019. It is streamed at yle.fi/klassinen, on radio and TV, and recorded at Yle Areena. All channels can be accessed worldwide both during and after the event.