The first Moomin book Småtrollen och den stora översvämningen (The Moomins and the Great Flood) was published 75 years ago. To mark the anniversary, FMQ gives an overview of music that has been composed over the years based on and inspired by Moomin stories.

Tove Jansson’s Moomin characters are known worldwide, with her books translated to over 50 languages to date. Since the 1990s, the Moomins’ popularity has been boosted by various TV series and films.

Music has a significant role in Moomin books. Jansson herself wrote many songs into her Moomin stories, although the melodies were left to the reader’s imagination. But her stories and texts have been set to many songs and other music, even inspiring a full-length opera.

The first Moomin song was an instrumental piece simply titled Moomin, which was commissioned to mark the second anniversary of Moomin cartoons in 1956. Jansson wrote the Swedish lyrics and singer Maynie Sirén recorded the piece in both Swedish and Finnish (Balen i Mumindalen; Muumien kevätjuhla).

Moomins were first seen on stage in 1958 when Helsinki’s Swedish-language Lilla Teatern produced a play titled Troll i kulisserna (Troll in the Wings). Tove Jansson wrote the script which was based on her book Farlig midsommar (Moominsummer Madness). Music for the play was composed by Jansson’s long-time colleague, pianist and composer Erna Tauro. Tauro’s songs, which depict each Moomin character’s individual qualities, are catchy and their folk-like tunefulness supports the storytelling. Most songs were performed with piano accompaniment by Tauro herself, and wherever other parts were written, they were played by a relatively small ensemble. In the opening march, the march beat from the percussion lays a solid base for the trills and runs from the woodwinds, the brass fanfares and the tapestry of strings in the background.

In the 2000s, pianist and composer Mika Pohjola arranged Tauro’s songs into jazz style tunes for his album Moomin Voices (2003). The album was released separately in Swedish and Finnish (Muminröster / Muumilauluja) and also feature Pohjola’s original songs which complement Tauro’s light-hearted writing style, as well as supporting the general mood and arch of the story. The changing metres, rhythmic treatments, orchestration and backing vocal harmonies take these Moomin songs into the world of jazz. 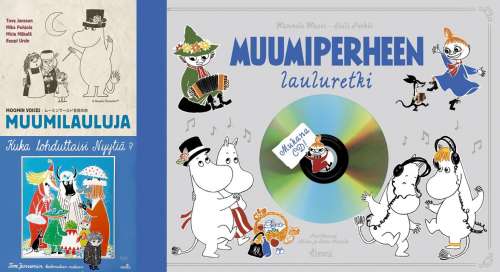 The picture book Vem ska trösta Knyttet? (Who Will Comfort Toffle?) has inspired several different musical responses. The oldest is a 1971 recording where Tytti Paavolainen reads the story of Toffle’s fears and how he grows brave, with music composed by Pekka Jalkanen. This arrangement is a narrated story where music mainly serves as a soundscape. The story is supported by simple instruments (such as wooden flutes, violin or cymbal) and simple music. Exiting moments or elements, for example, such as the wind or the Groke’s growling, are depicted through crisp dissonances and a jarring whistling from the flute. The music features a handful of recognisable melodies which depict a happy mood, such as a celebration or a frolic, but for the most part there is no obvious beat, and whenever several instruments are heard at once, each of them often plays a very independent theme.

The second musical version of the Toffle book is a music story composed by Peter Lundblad in 1978. It is a through-composed work where movements are tied together through a marine soundscape. The melodies set to the rhyming text are not particularly memorable, nor do they follow a verse structure of a traditional song.

The third musical interpretation of Toffle’s story was composed by Heikki Mäenpää. He has also written other Moomin songs, and the score for Dance Theatre MD’s production titled Dancing Moominvalley, which is based on the Tove Jansson book Det osynliga barnet och andra berättelser (Tales from Moominvalley). Dancing Moominvalley was premiered at the EXPO 2010 Shanghai and has subsequently toured in Finland as well as China, the US and Japan.

From the Moomin and Comet ballet by Finnish National Ballet. Music by Panu Aaltio:

Moomin stories have also lent themselves to opera. The two-act Muumiooppera (Moomin Opera) was composer Ilkka Kuusisto’s first opera, and it was premiered at the Finnish National Opera in 1974. After discovering Moomin books and thoroughly familiarising himself with them, Kuusisto started to consider an opera about the Moomins. He pitched his idea to the director of the Finnish National Opera at the time, Leif Segerstam, who was reluctant to commission the opera but promised to program it if Kuusisto were to go ahead and compose one regardless. Kuusisto also rang Tove Jansson to ask for her opinion. Several meetings around the idea soon followed, and a plotline based on Jansson’s characters started to take shape, featuring the main characters from the book Moominsummer Madness. The book provided an easy framework for the opera as the story takes places inside a theatre: in the midst of a great flood, the Moomin family discovers a floating theatre where they find refuge.

Jansson sketched a draft plot in Swedish and Esko Elstelä wrote the Finnish libretto based on the draft. Jansson became growingly enthusiastic about the opera and wanted to be involved in the smallest of details. Eventually she would even sit in the audience observing Moomin Opera rehearsals.

Kuusisto’s wish was to use his opera to introduce the child audiences to the diversity of music: in addition to traditional opera, the work includes oratorio singing, operetta and electronic dance music. Despite the predominantly negative reviews, the work was performed 34 times in 1974, and it was seen by close to 15,000 people. After its premiere, the Moomin Opera only received a couple of performances elsewhere in Finland, until it returned to Helsinki in 2017 after a 40-year hiatus, staged by the students of the Helsinki Conservatory. In 2019, the opera was performed in the Pyynikki Hall in Tampere, and at the Valkeakoski Theatre. 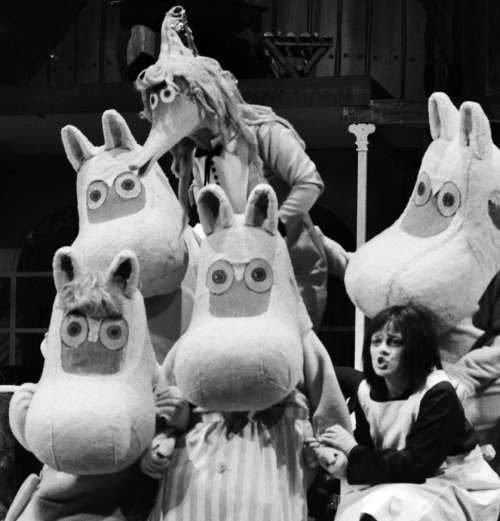 The Moomin Opera at the Finnish National Opera in 1974. Photo: Matti Björkman / Lehtikuva.

Currently the best-known Moomin animation series, the Japanese-Finnish-Dutch co-production titled Moomin, has been a television staple from 1990 with broadcast runs in over 120 countries, often more than once. The songs for the series were written by the Dutch singer-songwriter Pierre Kartner. The two theme songs, sung in Finnish and Swedish by Benny Törnroos, became ubiquitous children’s music hits in Finland and they have been a part of Finnish children’s and parents’ experience since the 90s.

The new TV adaptation titled Moominvalley is a Finnish-British co-production, first broadcast in 2019. It was awarded Best Animated Kids’ Programme of 2019 at the annual MIPCOM trade fair in Cannes. Each Moominvalley episode is supported by cinematic music by violinist Pekka Kuusisto and percussionist Samuli Kosminen. With their combination of classical influences and folk music rhythms, the musicians create a musical soundtrack which coexists with different sound effects. In addition to the compositions by Kuusisto and Kosminen, the series features songs performed and written/co-written by artists such as MØ, First Aid Kit, SOAK, Declan McKenna, Alma, Ellinoora, and Chisu's and Jori Sjöroos’s duo Roosberg.

In the 2010s, many new Moomin-themed children’s songs have been written. The 2014 album Muumiperheen lauluretki (The Moomins’ Song Trip), featuring Moomin songs composed by Soili Perkiö to the lyrics of Hannele Huovi, was chosen as the Children’s Music Recording of the Year as well as winning an Emma Award (the Finnish equivalent for the Grammy Awards) .

For decades, Moomin stories have inspired composers to create music in a whole variety of styles. What the best examples of Moomin music have in common is that in addition to being musically inventive and skilfully produced, they manage to reflect the Moomin world that Jansson originally created. A world that has room for tolerance, love, nature and friendships but also for reflections of conflict, fear and experiences of otherness and invisibility.

To borrow Snufkin’s words: “'Tonight is the night for a song. I’ll think up a new song that is one part anticipation, two parts pining for spring, and the rest a joyous declaration of how wonderful it is to be alone and at peace with yourself.'” (Tove Jansson: Tales from Moominvalley.)

To mark the 75th anniversary of the Moomins, Moomin Characters Ltd is launching the #OURSEA campaign in collaboration with the John Nurminen Foundation to help raise funds to save the Baltic Sea and its vibrant culture. Read more about the campaign here.

Music from the Moominvalley Playlist: