Historical research very often starts with the researcher consulting archives. Finland has a wide variety of libraries and archives with material on a wide range of subjects, including Sibelius, church music from the Middle Ages, folk music and popular music.

The Finnish archives are, compared internationally, user-friendly. The recommendations and interviews required before access is permitted to many foreign archives are not a part of Finnish research culture. People are willing to answer surveys, and foreign scholars in particular should always contact archives and libraries before they start work.

Like everywhere, in Finland it is the easiest option for the researcher to look for archives using the names of people. There are only a few thematic databases or databases devoted to general research subjects. Many personal archives are vast and well organised, but some have restrictions on use and copying, and, for example, at the National Library of Finland Sibelius’s manuscripts, drafts and sketches may only be studied from copies.

Finnish musical circles have always been small, and researchers often have the impression that before the Second World War, in particular, “everyone knew everyone else”. Although, obviously, not everybody was on good terms with everybody else, there was, for instance, a network of people in those times that extended very far and wide (even beyond musical circles); letters from famous people can be found virtually anywhere.

Most of the written materials in archives and libraries are in Finnish or Swedish, but letters from very important people worldwide can be found among the effects of individual artists – and the same is true of foreign reviews and concert programmes.

The rest of this survey deals in greater detail with three key archives: the National Library of Finland, the Finnish Literature Society and the Finnish Jazz and Pop Archive (since 2017 Music Archive Finland).

The National Library of Finland (formerly the Library of the University of Helsinki) is Finland’s largest and most diverse library, and in its collections there is an abundance of material on music. The focus is on classical music, but the huge collection of books, scores and recordings in practice covers all musical genres.

The publication of books on music became a widespread practice in Finland at the turn of the 20th century. The first music magazines date back to the same period (including Säveleitä, Säveletär and Tidning för Musik). The history of music criticism in Finland, on the other hand, goes back almost a hundred years before that. The National Library is entitled to receive a deposit copy of Finnish printed matter, so there can be found all the books, magazines, scores and recordings ever published/released in Finland. There are concert programmes, posters and other similar materials. The National Library is also the Finnish National Sound Archive, responsible for describing and storing Finnish recordings and providing a service for researchers and scholars.

The international collections of literature on music include not only scholarly research into the different musical genres of our own times but also such rarities as Athanasius Kircher’s Musurgia from 1650. Another significant collection is the library of German-born Richard Faltin (1835–1918), who was a teacher of music at the University of Helsinki in the late 19th century. It contains a good deal of mainly 19th century German literature on music (by A. B. Marx, Franz Brendel and Adolph Kullak, for example). Musical literature can also be found in the National Library’s excellent Slavonic Library. Its collections date back to the time of Russian rule, when the library had the right to a deposit copy of all literature printed in Russia.

A fifth ofthe manuscript collections at the National Library are connected with music. The Library has carried out a good deal of research into the archives of composers writing Finnish national Romantic music and those who lived in the early part of the 20th century. For example, the archives of the composer Erkki Melartin and the composer-scholar Armas Launis are extensive, well organised and used by many researchers. The National Library also contains a significant number of archived documents on Sibelius, though much can also be found in the National Archives and the Sibelius Museum in Turku.

Over the years the collections at the National Library of Finland have provided a channel for many different musicological studies. One of the pioneers of Finnish musical research, Toivo Haapanen (1889–1950), gained his doctorate in 1924 with his thesis on the medieval neumic fragments contained In the Library. Haapanen also compiled three catalogues of neumic relics and the research work that he began is being continued still today (with, for example, the projects of Ilkka Taitto and Tuomas Heikkilä). The first to make a thorough study of the composition sketches, manuscripts, letters and diaries of Sibelius was Erik Tawaststjerna (1916–1993), whose five-volume Sibelius biography (1965–1988) is still a classic of Finnish musical literature. Sibelius’s personal effects have since been studied from many perspectives and the Jean Sibelius Works (JSW) project (under the auspices of the National Library) will produce the first comprehensive, “critical” edition of his works.

Since it was founded in 1834 the Finnish Literature Society has supported and organised the collection and study of Finnish national folklore, poetry and folk tunes. Pioneers of research into Finnish folk music, Ilmari Krohn (1867–1960), Armas Launis (1884–1959) and A. O. Väisänen (1860–1969) all worked closely in their youth with the Finnish Literature Society. Krohn began the mammoth task of publishing Finnish folk tunes (1898–1933), a project sponsored by the Society and which his pupils, Launis and Väisänen, eventually completed. The collection was digitised in the 2000s by the University of Jyväskylä.

When he was young, Launis travelled to Ingria and Lapland collecting folk songs, and the recordings he made in 1905 were ground-breaking. Väisänen was a versatile scholar who focused his attention on the kantele and Kalevala rune singing, for example, as well as Sibelius. The collection of folk music and its study is also naturally linked to Finnish art music. Launis used Sámi joik melodies in his opera Aslak Hetta, and recent studies have shown new interest in the folk song influences and borrowings in Sibelius’s music, something that used to be undervalued amid the general enthusiasm to show his originality as a composer.

The Finnish Literature Society is also home to the Literary Archives, which includes a considerable number of Ilmari Krohn’s literary works. The Folklore Archives represent the Finnish heritage recorded in writing but they also contain sound recordings, including folk songs and interviews. The materials are digitised on an ongoing basis and compilation CDs have also been made of them. There are around 30 000 hours of recorded material altogether (including non-musical material).

The Finnish Literature Society is always on the lookout for new material, helped by various collection campaigns. 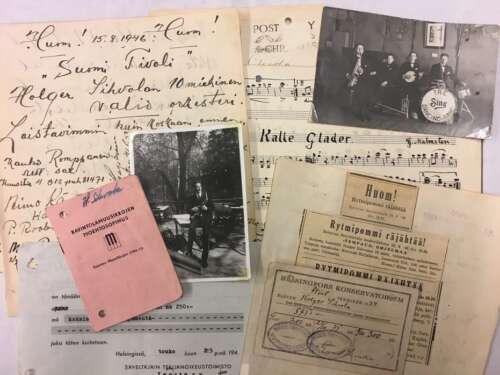 Research into jazz and popular music has become one of the main areas of focus for Finnish musicologists. Important examples of this are the lengthy work Populaarimusiikki (Popular Music, 2003), published by Pekka Jalkanen and Vesa Kurkela and appearing in the series Suomen musiikin historia (A History of Finnish Music), as well as a number of books and articles by other contemporary researchers. It is perhaps worth remembering that the borderline between classical and popular music in the history of Finnish music has not always been very clear. For example, in the 1920s and 1930s an enormous number of musicians with a classical background played in restaurants, pubs and cinemas (accompanying silent films).

The Finnish Jazz and Pop Archive (JAPA) was established in 1990 [since 2017 the archive goes by the name Music Archive Finland]. It contains a wide range of source material [in 2021 a total of 1200 shelf meters] for researchers into jazz and pop music. Its collections cover written materials (letters, scores, cuttings from newspapers and magazines, photographs, posters), recorded interviews with musicians, audio-visual media, and more than 6 000 hours of unreleased recordings of music. The collection includes the archives of certain old Finnish music corporations, material connected with many post-war names in popular music, dance and rock ‘n’ roll (including Olavi Virta, Kullervo Linna, Radion tanssiorkesteri [Radio Dance Orchestra] and Jussi Raittinen), and the estate of the CD manufacturer Dicentia (formerly CD-Linja). The press cuttings have been assembled systematically since 1997, although many personal archives contain the artists’ own collections of cuttings and photos, some going far back into the past.

One of the Archive’s main areas of interest is the digitisation of sound and audio-visual recordings. It runs the national internet service, Digiwiki, which provides information and instructions on digitisation and relates people’s experiences. The Archive's Digitoimisto [Digi-office] offers a digitisation service to outside institutions and individuals. The Archive has also been involved in many collaborations in the field. It publishes books and is releasing a series of CDs devoted to the history of Finnish jazz, featuring many forgotten recordings and performers.

[Updated:] In 2017, the Finnish Institute of Recorded Sound (Suomen Äänitearkisto ry) -  a national sound archive aiming to create a complete collection and documentation of all Finnish recordings from 1901 to 1980 – donated their collection to the Music Archive Finland. The collection contains a total of 450 shelf meters and 35 000 recordings.

This article was first published in FMQ 1/2011 and is now (April, 2021) republished with the kind permission of the author.

Matti Huttunen, Ph.D., is Professor Emeritus of Research in Musical Performance at the Sibelius Academy.

The list is based on Janne Mäkelä's comprehensive listing of music archives in Finland (in Finnish). In addition to the actual music archives, the list includes other professional archives that manage music collections and music organisations that have their own archives.