What if the aim of music education was not to focus on producing masters, but to create a lifelong, enthusiastic connection with music, where an essential part is making music together? This is exactly what the Kaustinen-based Näppäri method strives for.

“The Näppäri movement is a method and a music education forum which enables everyone to participate and experiment as well as experience the joy of playing in a group”, says the father of the method, violinist and folk fiddler Mauno Järvelä. There are no auditions required to join, and the arrangements are made to allow everyone to participate according to their individual skill level.

The age range at a Näppäri course can cover anything from four to 85, as well as including special needs learners. “We are always ready to accept a challenge and the situation is different each time we begin to train a new Näppäri group towards a concert.”

Each course is centred around a concert program which is presented at the end of course to audiences consisting of players’ families and anyone else who is interested. “The concert creates a focus, which in part directs our activities and crystallises our achievements. We also involve the audiences, not only to listen but to join in as performers as we often include them in our singing.”

From a small sprout

The Näppäri method started to take form when violinist Mauno Järvelä returned to his hometown of Kaustinen. After studying in the Sibelius Academy, teaching at various music institutes and playing in the Finnish Radio Symphony Orchestra, the Finnish National Opera and the Kokkola Orchestra, he found himself as the leader of the fiddler group at his local community college in the Perhonjokilaakso region.

Järvelä took on the position of a music teacher at the community college in the autumn of 1980, initially for a few hours a week. By the following summer, his children’s group performed under the name Näppärit at their own village festival – which just happens to be the oldest and biggest folk music festival in Finland!

The Näppäri method started to rapidly gain momentum and by 1985, Järvelä was employed full time. Today, the Näppäri courses spread the gospel of playing together by touring to different music institutes and towns in Finland and abroad. At last year’s Kaustinen Folk Music Festival, the traditional Näppäri concert set a new record in terms of performer numbers: the 500-strong group of players also included groups from Scandinavia. This year, the all-Finnish Näppäri group “only” included 350-400 performers. “It is hard to know the exact numbers as anyone who has managed to figure out the concert set list and to materialise on the stage is welcome to join in!” 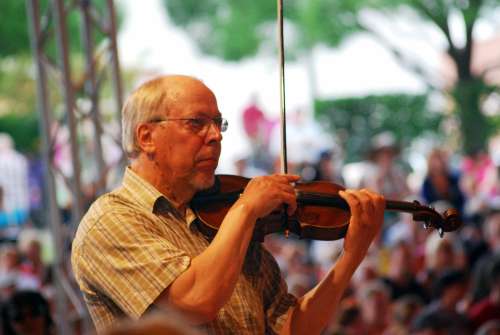 The significance of local tradition

“The violin first arrived in Finland in the 1700s. Soon after, folk music was played on violins in the Perhonjokilaakso region and the tradition continues. Kaustinen also has a long history of classical music, with the first local string quartet formed a century ago. The fact that both traditions are active makes for an interesting dynamic”, Järvelä says.

“In 1986, I gave a lecture about the base of my own work and already pointed out that we should try to change the course a bit and start including local traditions at our music institutes as well. If our traditions cease to live on, we will have to go to the archives to find information. If traditions are forgotten altogether, we lose colours and nuances. We have access to a much more interesting music scene if local traditions are alive and strong.”

The Näppäri groups play Finnish and sometimes Scandinavian folk music. Instead of teaching them mainstream children's songs, Järvelä custom-makes songs that offer a wealth of information about significant figures in Finnish history, for instance, laced with a healthy dose of humour.

“When learning about history, men tend to be more prominent as active women were not traditionally allowed into the spotlight. We justify making songs about these men because we have succeeded in including girls as players. Today, they represent a majority in our groups.”

Other song subjects have included operas, Baltic Sea protection missions and the 250th anniversary of the free press, to mention a few. “What could be better topics for children’s songs?” Järvelä grins.

A jam for everyone

The Näppäri method is very non-restrictive, almost custom-made. “It is simply not possible to fit all students into the same mould”, Järvelä explains. “We maintain a positive attitude and base our teaching to keeping the flow going. Some students go far and some even further – that’s all there is to it. The main thing is to create a good relationship with music, which is what music institutes are now also aspiring to. This is something we have to think about all the time, and with each and every student.”

A good relationship with music does not mean that you eventually quit playing and move on to the audience, but perhaps that a player from any skill level can start a jam when meeting another player, as it is stated in a book edited by Antti Huntus, titled Näppäripedagogiikka (translated also in English, The Näppäri Method). For the audiences, Näppäri concerts provide moving experiences as a stage full of children and their teachers make music with not only at a high standard, but with great enthusiasm as well. The oldest and most advanced students stand at the back on the highest risers, and row by row the players get smaller, until you get to the very front row with the smallest players, who play open strings when not busy singing at the top of their voices or using their bows to sword-fight with their fellow players.

Never too late to learn

Each set of new Näppäri materials, which are prepared each year, include arrangements with several different parts, in order to cater to each player’s skill level. It also includes a lot of songs so that the students who have just recently started playing also get a chance to join in the concert, at least through singing. “We also produce some instrumental tunes specifically for our more advanced students. But in this summer’s concert, everyone was able to join in from the fourth piece onwards to the very end”, Järvelä remembers.

“Those who have been playing for a long time are important role models for the younger ones. They provide motivation to keep playing, and the children tend to look forward to being able to move on to a more difficult part. This is how it’s always been – folk musicians listen to those who know more and try to copy them. It is a healthy progression.”

”When you start playing as a child, it’s easier to grasp the fine motor skills required, but it’s never too late to start playing. A human being is a lifelong learner, even though learning gets a bit slower when we are older”, Järvelä emphasises. In addition to directing children’s groups, he has been leading the adults’ folk fiddling group for decades.

In Kaustinen, anyone who wants to is welcome to join the Näppäri group. There is a limited amount of spaces at the community college, but the Näppäri group has a supporters’ association which sources funding for all tuition by organising gigs, receiving a small annual grant from the local council and producing a live recording of each summer’s main Näppäri concert.

“Playing is all about experiences. A successful performance is a great experience for skilled soloists and makes them feel empowered for a long time. The Näppäri concerts create an opportunity for the audiences and players to join together into a larger group that seems to experience the same feelings in that moment. Music brings people closer together, especially when music is made in a large group. It gives access to those kinds of feelings that you would want everyone to have access to. A soccer match, for instance, is different thing altogether: it is easy for the winners to be happy. The ones who lose have to work hard to process their loss and regain their positivity and will to go on. In music, there are no losers, we only have winners.”