PREVIOUS ARTICLES FOLLOWING ARTICLES
"I am a composer of contemporary music, but also frequently an ordinary concertgoer – a music listener. My purpose here is to consider an art music concert event from the perspective of an audience member," writes Riikka Talvitie. This column is part of the series where composers and musicians write about their music.

As a listener, I go to a concert sometimes at my own initiative and sometimes for social reasons. If a child of a family member is performing, or if a group of friends have agreed to meet at a concert, it is almost an obligation to attend. The works being performed and the musicians performing them are of interest to me, naturally, but nevertheless sometimes the concert selects me rather than the other way around. I rarely go to a concert to listen to music just for the sake of going to a concert; far more often there is a specific reason for why I am there.

As a listener, I am listening to a concert programme planned by someone else – sometimes with the audience in mind, sometimes motivated by other reasons, social or financial.

Concert programmes feature pieces of music written by composers – sometimes with the audience in mind, sometimes explicitly and cavalierly disdaining them. “To be honest, I’m not really interested in what the audience expects to hear.” (Zembylas & Niederauer 2018, 21–22.)

Although there are innumerable sorts of music these days, in art music it is still the role of the listener to listen to pieces of music as autonomous entities. Music progresses in linear time, and I am expected to listen to a work and give it my full attention from start to finish. I must confess that my thoughts often wander and I fail to be riveted by the dramaturgical structure offered up by the composer. Perhaps the freedom to do so is significant for the role of the listener.

Grant H. Kester is an arts theoretician in the USA who has focused on studying communal art projects created through dialogue and interaction. He coined the phrase ‘orthopaedic aesthetics’ to describe the aim of the avant-garde contemporary artist to shake up listeners (or viewers) in order to cause what he calls ‘ontological dislocation’.

In orthopaedic aesthetics, artists place themselves above the listener and implicitly know better than the listener what it is that the listener needs. There are two assumptions at work here: firstly, that the relationship of the listener to the world at large is somehow flawed, and secondly, that the artist is the best possible person to rectify this unfortunate anomaly.

As an analogy: the listener’s shoulder, as it might be, has been dislocated, and it is the job of the composer-as-orthopaedic-surgeon to put it back in. 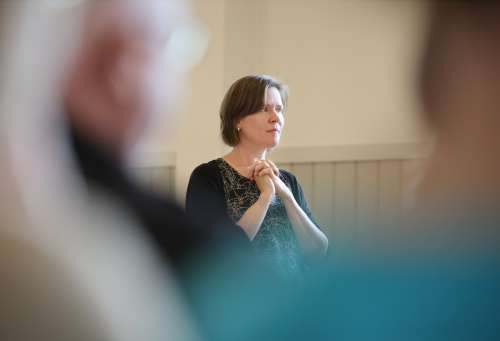 In contemporary music, we are still living in an era where every single work has to justify its existence at the moment of performance. A composer’s task is to create a work that will blow the listener’s mind at first hearing. For composers, this easily leads to a vicious circle where every piece has to outdo its predecessors in loudness and general craziness. Kester refers to this listener experience as a “prediscursive [=immediate] shock”, a visceral emotional reaction caused solely by the composer of the music that one is hearing. Perhaps the notorious world premiere of Stravinsky’s Le sacre du printemps caused such an experience.

The aesthetic of a piece of music manifests itself within the performance of the work in concert. The process of appreciation has not become as interactive and performative as in many other branches of the arts. Often the relationship between composer and audience is a one-way street. In the traditional scheme of things, audience members only participate in the discussion after the fact, by reporting on their responses or preferences after hearing the music.

The autonomy of a piece of music and the enclosed space of a concert venue suggest a parallel to the concept of the ‘fourth wall’ in theatre. In a traditional theatre performance, audience members witness the action through an imagined fourth wall and pretend, through a wilful suspension of disbelief, that they are watching actual events. Breaking the fourth wall [i.e. addressing the audience directly] is a device that has been used time and again in stage performances. In my experience, the fourth wall does not exist in a concert of music; instead, both musicians and audience members are in the same space, the same enclosed space, being of the same mind and trapped in the same enclosed piece of music...

...and it is in that enclosed cubicle that the orthopaedic surgeon performs the procedure.

Wearing my occasional concertgoer’s hat, I suspect that there are other listeners out there who would like to hear music that somehow reflects current values and areas of interest in society at large. Perhaps something open, tolerant and pluralist instead of an enclosed aesthetic space. Kester suggests a dialogical aesthetic experience as a replacement for an orthopaedic one, establishing shared experiences through a longer-term and more equitable interaction between listeners and creators.

At my composition concert forming part of my artistically oriented doctorate, given in the Black Box at the Music Centre in Helsinki on 21 April 2022, I made an attempt at shattering the illusion of an enclosed space that a conventional concert performance evokes.

In the middle of the concert, a group of children enters. One of them sits down at the grand piano, and the other three set up an ice cube lab in the middle of the stage. One opens a bottle of fizzy water and pours some out over a microphone. Two others begin to play music on the ice cubes. One waves to their mother in the audience, one blows through a straw to make bubbles in the water, and one throws ice cubes onto a metal tray.

This was my way of illustrating what a concert context could be like if we abandoned the rigorous restraints of the aesthetics of autonomy. The sound of the ice cubes provided an additional layer over the composed music, an uncontrolled and uncomposed yet extremely energetic layer.

From the listener’s point of view, we had escaped from the confines of an autonomous piece of music.