A pioneer of Finnish violin repertoire and a virtuoso of the school of Joseph Joachim – handsome epithets that apply to composer and violinist Agnes Tschetschulin (1859–1942). She was the first star student of the Helsinki Music Institute (now the Sibelius Academy) and went on to create a prominent international career.

On 2 April 1884, opera singer and voice teacher Emilie Mechelin sang three Lieder written by Agnes Tschetschulin at a matinee of the Helsinki Music Institute. In the following month, Tschetschulin herself performed her Romance for violin and piano at a student recital. These were most probably the first publicly performed student compositions written at the Helsinki Music Institute, which had been inaugurated in autumn 1882 (and would later evolve into the Sibelius Academy).

Tschetschulin was the Institute’s star student in its early years (1882–1885). She performed violin concertos and piano concertos along with her own compositions at the Institute’s concerts. While still a student, she joined professional ensembles and assisted at recitals given by established artists.

At the Music Institute, Tschetschulin studied the violin and ensemble playing with Hungarian-born Anton Sitt and composition and music theory with Martin Wegelius, the director of the Institute. Agnes had had a thorough musical education as a child, having studied with German-born violinist Gustaf Niemann, among others. Her family was keen on languages, culture and the arts – and on breaking glass ceilings.

[Photo: Violin students from the early years of the Helsinki Music Institute. Agnes Tschetschulin (in a striped outfit on the right) and Jean Sibelius (seated on the left) were not contemporaries as students, even though they appear together here. The photo was probably taken in early autumn 1885, at which time Tschetschulin was about to leave for the Royal Academy of Music in Berlin and Sibelius was just beginning his studies at the Helsinki Music Institute.

Standing beside Tschetschulin is Anna Tigerstedt (1860–1946), with whom she played chamber music as part of her studies. Seated in front is Gunnar Bergroth, and to the left is Elin Warnhjelm (née Lönnblad), next to an unidentified girl. Mitrofan Wasilieff, in the centre, never taught Tschetschulin, as she was Anton Sitt’s pupil.

A cosmopolitan in Berlin...

Agnes Tschetschulin was one of the first four students to receive a graduation certificate from the Helsinki Music Institute in 1885. In the same autumn, she went on to study at the Royal Academy of Music in Berlin (now the Berlin University of the Arts), being probably the first Finn ever to enter that institution.

Tschetschulin studied in Berlin for four years. From her second year, she studied the violin and ensemble playing with the legendary Joseph Joachim, having initially studied with Emanuel Wirth, who played viola in the celebrated Joachim Quartet. She studied composition with Heinrich von Herzogenberg and Woldemar Bargiel, the latter chiefly remembered today as the half-brother of Clara Schumann.

According to a letter of recommendation written by her music history teacher Philipp Spitta, Tschetschulin excelled at her studies. She was awarded government grants, and her studies, concerts and compositions were reported in the Finnish press.

In Berlin, Tschetschulin became acquainted with fellow violin virtuoso Marie Soldat (1863–1955), who was a member of the inner circle of Joachim and Johannes Brahms. In 1887, Soldat established a string quartet of rising stars. Tschetschulin played 2nd violin in the quartet, with Gabriele Roy on viola and Lucy Campbell on cello. The group was billed as the world’s first professional female string quartet. They were managed by the Herman Wolff agency, which also handled the Joachim Quartet and the Berlin Philharmonic.

Tschetschulin spent a couple of years touring Germany with the quartet (albeit substituted by Mary Schumann at some appearances). At the same time, Simrock began to publish her compositions, including the Berceuse (1888) and Alla Zingaresca (1890) for violin and piano, Valse gracieuse (1897) for piano, and Gavotte (1906) for violin and orchestra (or piano). Many violinists of the day performed Tschetschulin’s pieces at their recitals.

Tschetschulin held the position of Professor of Violin at Cheltenham Ladies’ College in Gloucestershire in England. The photo shows the library wing and the grand Princess Hall as seen from the music wing.

...and in Cheltenham, London and Stockholm

In autumn 1891, Tschetschulin took up the post of Professor of Violin at Cheltenham Ladies’ College in England, where she remained for thirteen years. The institution was a boarding school with a progressive agenda, led by suffragette and education reformer Dorothea Beale, and it had a superb music programme. Tschetschulin resigned her post in 1904 and moved to London, where she established herself as a freelance musician, composer and teacher, relying on a close-knit network of (female) colleagues. She became a British citizen in the same year.

During the First World War, Tschetschulin returned to Finland for a while, but in the early 1920s she emigrated to Stockholm, where she lived for the rest of her life, teaching the violin, ensemble playing and composition well into her old age. She was buried in Stockholm, in the same grave as pianist Tora Hwass (1861–1918), who had been her close companion. 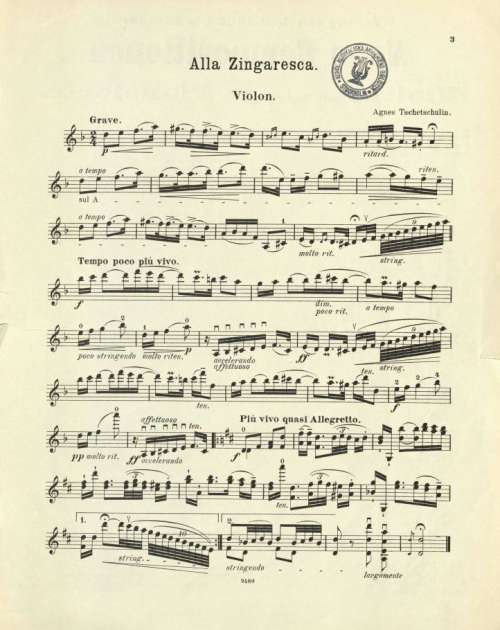 Thanks to her hit pieces for the violin, Tschetschulin was one of the Finnish composers most frequently performed abroad in the 19th century. The manual Selected Violin Solos and How to Play Them (1905) by Basil Althaus recommends her Alla Zingaresca (1891) as an encore, and this remains a valid recommendation to this day.

Tschetschulin wrote pieces for violin and piano, solo songs, choral works, orchestral music and pedagogical material. Many of her works have been lost, but all those named in the present article are available as historical publications, except for the Romance.

Tschetschulin’s music is in a central European late Romantic style in the spirit of the salon elegance of the fin-de-siècle, featuring tuneful melodies, sensuous pulsation and virtuoso effects.

Tschetschulin published her first composition at the age of 19 in 1878. Marsch tillegnad Finska Gardet vid dess återkomst från kriget 1877–78 [March dedicated to the Finnish Guard on its return from war 1877–78] was written for piano but also arranged for wind band. The piece is brisk and was favoured by audiences, and the bands of both the Finnish Guard and the Oulu Battalion performed it in concert and on parade towards the end of the 19th century. Being musically handsome, historically valuable and not entirely irrelevant from the perspective of gender equality, this march deserves to be reinstated in the repertoire of the Guards Band and, say, at the Independence Day reception of the President of the Republic of Finland. There are plans to publish the score and parts of the piece in the Finnish Musical Heritage project.

Tschetschulin wrote a number of marches. Her good-humoured and swinging Britain’s Sons (1921) has been performed for instance at the changing of the guard at the Royal Palace in Stockholm. Vöyrin poikien marssi [March of the boys from Vöyri] (1918) is associated with the White faction in the Finnish Civil War and has a considerably more sombre tread.

Agnes Tschetschulin is a fascinating example of a cosmopolitan composer and musician the study of whose life and works serve to change conventional conceptions about the history of Finnish music, about the history of women in Finland, about our cultural heritage and ultimately about ourselves. 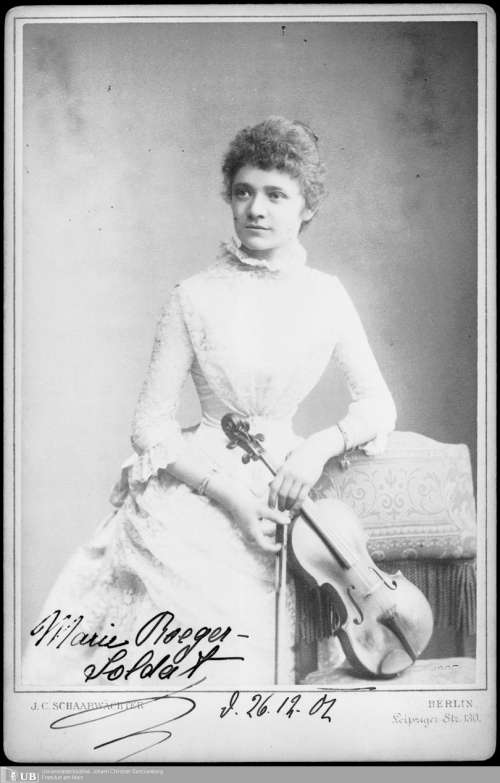 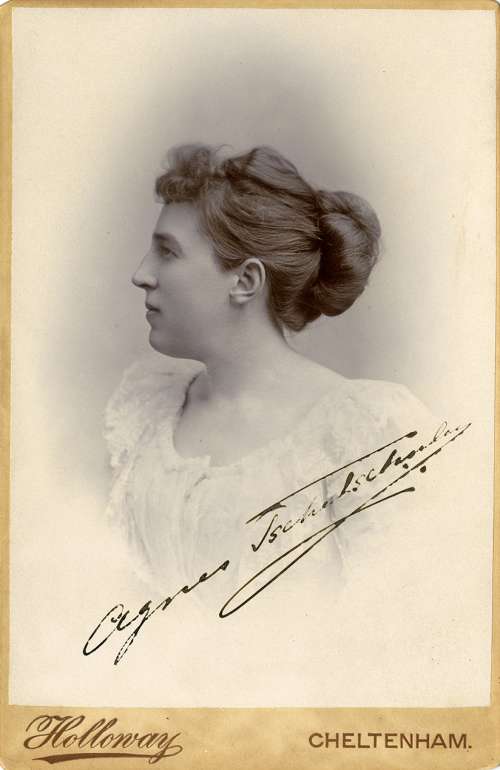 Left: Viennese violinist Marie Soldat-Roeger was an important colleague and friend to Tschetschulin. Both studied with Joachim. Soldat is generally remembered as Brahms’s favourite violinist, having given the Vienna premiere of Brahms’s Violin Concerto, but she was also a prominent champion of women as musicians. Soldat performed Tschetschulin’s works at her recitals.
Photo: J.C. Schaarwächter (1885), Frankfurt University Library.

The sheet music of Alla Zingaresca by Agnes Tschetschulin may be found here (the second-last piece in the collection, page 23/12).

Berceuse by Agnes Tschetschulin can be heard on Spotify.

Violinist Mirka Malmi and pianist Tiina Karakorpi will perform works by Agnes Tschetschulin at a recital entitled Nainen ja viulu: Romanssi [Women and Violin: Romance] at the Gallen-Kallela Museum in Espoo, Finland, on 11 August 2019. The recital is hosted by Susanna Välimäki.

Docent Susanna Välimäki PhD is writing a biography of Agnes Tschetschulin. She is a senior lecturer in musicology at the University of Turku.

Kuha, Jukka 2017. Suomen musiikkioppilaitoshistoriaa: Toiminta ulkomaisten esikuvien pohjalta vuoteen 1969. [History of music institutes in Finland: the international examples and the development from the beginning to the year 1969]. Helsinki: Musicology, University of Helsinki.