In 2013, musician Ramy Essam was banned from performing in his home country of Egypt, and in late 2014 he arrived in Helsinki to work in a Safe Haven residence. In this interview, Essam talks about musical activism, exile and his own music, which is a fascinating mix of hard rock, hip hop and Egyptian melodies. ”People in the Nordic countries have a really big space for freedom of expression that they don’t use enough,” Essam says.

Rock artist Ramy Essam is currently struggling with the same challenges as many other musicians. The pandemic put a stop to playing gigs and complicated his professional life in general. He has had to keep changing his plans as the situation unravels, and to direct his energies into studio work instead of touring. He is currently working on a new album, due for release later this year, with Swedish producer Johan Carlberg.

The new album has a theme that few musicians can personally relate to: the works on his recording talk about life in exile.

Programmed to be a fighter

In 2011, when Ramy Essam was in his early twenties, he performed his piece Irhal [Leave] in Tahrir Square. Hundreds of thousands of protesters joined in his song. Not long after, Egypt’s leader Hosni Mubarak resigned. Essam rose to great popularity in his home country and attracted increasing international attention, and the Time Out Magazine included Irhal as number three in their listing of songs that changed history.

Ramy Essam knew early on that the road he had chosen was not an easy one. Soon after the events at the square, he was arrested and tortured. The political situation in the post-Mubarak Egypt has remained unstable. In 2013, Essam was banned from performing in his home country, and in late 2014 he arrived in Helsinki to work in a safe residence provided by the Artists at Risk project. Today, the musician divides his time between Finland and Sweden.

Fear has never stopped Essam from using his music to give people hope and a belief in a brighter future.

”I’m a fighter, I was born like that. It’s like in my software somehow. This is me anyways, ever since my childhood. And the revolution proved my belief in the power of music. I never considered the ’stop’ option at all.”

In 2018, Essam released a piece titled Balaha, in a bid to encourage conversation about Egypt’s political situation. In a matter of days, the music video attracted millions of views. The song’s lyricist Galal El-Behairy, web designer Mustafa Gamal and video director Shady Habash were arrested in Egypt. Habash died in captivity in spring 2020, but El-Behairy continues to write from his prison cell. In addition to Essam’s compositions and poetry of El-Behairy, the new album includes lyrics from other Egyptian writers as well.

”There are also texts by dead poets who are safe because they are beyond arrest, and texts by authors who remain anonymous because they live in Egypt”.

The gig was part of #RiskAndRebellion online symposium by Artists At Risk.

Message and exile are two themes that cannot be ignored when interviewing Essam or writing about him, but he also enjoys talking about his music, which is a fascinating mix of hard rock, hip hop and Egyptian melodies which Essam hears in his head non-stop. The new album will also have a stronger presence of electronic and industrial sounds.

Like so many others, Essam counts his older brother as a great influence on his music tastes. In Egypt, Western popular music was not readily available even by the 2000s. When Essam first heard Linkin Park’s debut album Hybrid Theory (2000) through his brother, the experience was mind-blowing.

”When I listened to Chester screaming − wow, I just lost my mind. I didn’t even know that you could scream in a song like that. I just went crazy.”

Essam’s other important musical role models include Nirvana, Rage Against the Machine and System of a Down, as well as the Algerian singer Rachid Taha, who died in 2018 and whose music successfully combined rock and North African music. For the first few years, Essam played guitar just for fun, but when he was twenty, three years before the revolution, he found a new significance for his music.

”I had political conversations with my older brother and read [Amgad El Qahwagi]’s poems. That was a real start to where I am now. It helped me to change, to open my eyes and even to control my anger.”

Today, music and message go 100% hand in hand in Essam’s life. He considers himself privileged to be able to address important issues through his music.

”Music is my first love. I’m a musician and an artist and I never want to stop feeling and talking about everything I feel as a human being. But I’m lucky to be an artist and able to convert these feelings to music.”

Essam would like to see more musical activism around him.

”People in the Nordic countries have a really big space for freedom of expression that they don’t use enough. People take things for granted, but you may wake up one day and suddenly everything’s gone. I wish that every artist would contribute at least one per cent of their art to saying something.” 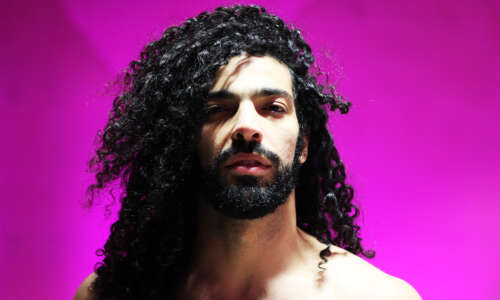 Freedom to create and to grow musically

At first, the geographical distance to Egypt felt totally liberating for Essam.

”I became so much better as an artist. I got time to study and learn, to develop my art as well as access to great studios and collaborations with high level producers and musicians. The artist who I am now compared to who I was six years ago – the difference is huge at all levels.”

As the Balaha case proves, however, this freedom is not absolute. ”I’m not free from their harm 100 per cent, but I’m not in jail either.”

Essam has toured Europe and North America and collaborated with notable musicians such as PJ Harvey. He has played gigs at rock and folk music festivals, at performance venues ranging from intimate clubs to main stages.

”But my main audience is in countries where I can’t go to.”

At first, Essam found it challenging to perform in front of an audience where perhaps only five per cent would understand Arabic. However, this reality has prompted him to develop and adapt his performance and story-telling style to enable his audiences to experience his songs better. His music making remains uncompromised, although it has not been an easy road.

”Being a political artist doesn’t sell so easily. It’s never the hot music or hot topic. But I’m not willing to change that for any reason. Sorrow and hope are with me all the time, they keep me going.”