On September 26, 1972 the Finnish Broadcasting Company (Yle) lifted the ban it had imposed over the years on individual records. It also decreed that the same principles as those for other material should be observed in choosing records for radio programmes.

The earliest bans dated from 1945, when records made during the war for propaganda purposes were deleted from the Yle repertoire. For in Finland, as in other countries at war, a host of records had been made jeering at the enemy and praising “our brave boys”.

Often the propaganda was not immediately apparent: a song might admire the beautiful scenery and express longing for a distant sweetheart, but the place names would reveal that the singer was far from home on the shores of Lake Onega, in the Soviet region occupied by the Finns.

Some of the records made in Finland during the war were, however, blatant propaganda. The worst went so far as to swear that large parts of the Soviet Union would be turned into a graveyard with the help of the Germans.

Material hostile to the Allies

By 1945 Finnish radio listeners were so sick of the war that no one wanted to hear songs about it on the radio any more. Their mere wish was not, however, trusted, for Finland was one of the losers of the Second World War. The highest authority in Helsinki lay with the Allied Central Commission that obliged the Finnish Government to enforce the removal from bookshops, cinemas and radio programmes of anything hostile to the Allies. Yle had no option but to comply.

There is a neat little Story attached to the censorship imposed on records. The then head of the Yle archives, Alvar Andström, was a thrifty man. Instead of destroying the banned records, he had them taken down to the basement. In some cases only one side of the record bore unsuitable material, and records cost money. Why destroy the whole record if one side could still be used? He therefore attached warnings to these records and the permissible B-side continued to be played in programmes.

But one day a careless technician put the wrong side on the turntable and a militant marching song filled the air. Half an hour passed before a black diplomatic car drew up at the door of Radio House and out stepped a spokesman for the Soviet Embassy demanding an immediate audience with the Director General... 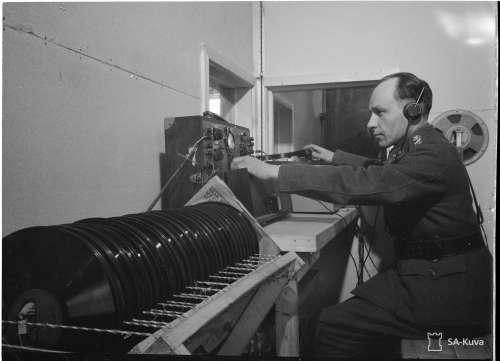 In the 1950s life returned to normal and the commonest subject of songs was happy or hapless love. The record companies were eager to promote their new releases for inclusion in such popular radio programmes as “Saturday Requests”.

In those days records were played on the radio far less than they are today. Live music dominated. Yle had its own symphony orchestra, light orchestra and choir. Popular dance bands visited the studios weekly. The attitude to recorded music was selective, and discs merited only a few hours a day.

Every week the music section held a meeting to listen to new records and grade them A, B or C. A record graded as C was not played on the radio. Among the most common reasons for the ban were that the singing was out of tune or the recording was technically poor.

Sometimes the reason entered in the file would be “nauseous words”. Listened to today, the banned records of the 1950s for the most part simply sound banal.

Then came the sixties and new winds began to blow both at the radio and in record production. For the first time ever the monopoly of the Nordic broadcasting companies came under threat with the appearance in the Baltic of pirate radio stations anchored in international waters and sending out American-style music programmes seasoned with advertisements. The old national broadcasters hit back by increasing the proportion of light music in their programmes.

Meanwhile, popular music was becoming more radical. The romantic hits of the fifties were joined by protest songs, critical humour and political satire. So many records were now being produced that it was virtually impossible to assess all the new ones. Anxious to safeguard its rear, the music section introduced a policy of getting the programme director to vet any record it deemed in the least bit doubtful. The suspects were no longer off-key songs but texts that were politically or morally questionable. Sometimes the verdict would be in the record’s favour, but the section was also ordered at regular intervals to ban a particular item.

Looking back, the bans on records and the reasons given show just how hypersensitive Yle used to be. Every effort was made not to offend any interest groups of importance. The most frequent reason for banning a record was its favourable attitude to drinking. Finland had experimented with prohibition in the 1920s, and even four decades later the question of alcohol still divided the nation. Schoolchildren were taught strict temperance. Alcohol was sold only at special state owned stores and severely taxed. Advertising alcohol in any way was totally prohibited.

One of the first discs banned according to the new system was Irwin Goodman’s Ei tippa tapa [A drop won’t kill]. Irwin Goodman, alias Antti Hammarberg, was marketed to the public as Finland’s first protest singer. In looks and vocal style he imitated Bob Dylan, only the butt of his protest was not atomic warfare but such time-honoured Finnish topics as liquor, women and the police.

“A drop won’t kill” tells of a man who finds himself unemployed and embarks on a week-long boozing spree. The story is told in a brisk, humorous tone, and the song may well be heard as a eulogy to drink. The ban did nothing to curb sales. The song was a tremendous hit and news of the ban no doubt lent impetus to its sales.

All in all only a few dozen records ended up on the Yle black list in the 1960s. Other reasons, apart from showing alcohol in a favourable light, were disrespect for religion, political satire, sex and drugs.

Lasse Mårtensson’s Matti murhamies, a story about a murderer called Matti written in the idiom of a folk ballad, was likewise outlawed. No one pointed out that far worse atrocities are committed in the Finnish national epic, the Kalevala, which all schoolchildren have to read.

Bans were usually decided by the programme director, but once even the Yle Administrative Council, the company's highest executive organ, felt obliged to intervene when it felt that a record had offended against national morals.

In the 19th century Finland's national poet Johan Ludvig Runeberg told a romantic story about a peasant called Saarijärven Paavo who doggedly farmed his land even though his crop was repeatedly ruined by the weather. When Irwin Goodman, known for his tendency to mock, wrote a satirical song on the same theme called Paavo, Paavo, the Yle Administrative Council decided on the initiative of the Centre Party representing the agrarian population to impose a total ban on the song. In order to create an Impression of fair play, it also banned a record mocking left-wing politicians.

It is sometimes difficult for listeners today to fathom why certain records were banned in the 1960s, and they often come away with the feeling that bans were imposed “just to be on the safe side”. In the 1970s the whole system began to seem outdated. Artists exploited it in their marketing. When Irwin Goodman made a new record, he promised his buyers that it would be banned from the radio.

Finnish society had, as a whole, grown more radical, however. The TV programmes targeted at the general public covered the same topics as the banned records, only far more radically. In 1972 the record vetting system was abandoned. From then onwards, all editors were accountable for the records they played in their programmes, just as they were for their other content.

Does this mean that since 1972 all kinds of records have been played on the radio? Yes and no.

Records that no editor would dream of playing on the radio are still being made. The punk era saw the release of a lot of records that deliberately sought to offend well-known characters. The majority of these garage-band releases sold only a few hundred copies, and the victims of the gibes seldom even heard them. Some cases did, however, reach the courts and discs were confiscated. Playing a record such as this on the radio would undoubtedly have resulted in legal proceedings.

The bulk of the new records never go out over the air, however, for the simple reason that the world is turning out so many that no radio station could ever play them all. Nearly two-thousand new domestic CDs are released in Finland each year, which amounts to about five a day. Meanwhile most radio stations have been profiling themselves more closely, so that each channel has its own listenership. Records that do not fit the profile as a rule do not get played.

This article was first published in FMQ 2/2007 and is now republished with the kind permission of the author.