Helsinki-Cotonou Ensemble fuses West African rhythms to an array of jazz, funk and rock for a high-energy sound that appeals to heart, head and feet. Born in Benin in 2009, the band has won fans with high-energy live shows on three continents.
July 2015: A cold, wet afternoon at Pori Jazz Festival. Seeking shelter from the rain, festival-goers stumble into a tent where Helsinki-Cotonou Ensemble is setting musical fire to the stage. With a riotous horn section, blazing guitar solos and African drums, this band is an instant party. Soon the place is packed with dancing people wearing broad grins.

Charismatic vocalist-percussionist Noël Saïzonou and guitarist Janne Halonen are at the heart of Helsinki-Cotonou Ensemble. The band’s roots go back to 2009, when Halonen was an artist-in-residence at Villa Karo, the Finnish-African cultural centre in Benin. It’s located in Grand Popo, a coastal village 80 km from the biggest city, Cotonou. Saïzonou moved to Grand Popo around 2000, releasing a couple of traditional solo albums and forming Trio Toffa with visiting Finnish keyboardist Kari Ikonen – a group in which Halonen, too, later played.

From Helsinki to Cotonou

Halonen’s own musical roots go back to plunking Beatles and Rolling Stones songs on guitar in fifth grade. As a teen, he started playing live at Jyväskylä’s Jazz Bar, where a few years earlier, Ikonen had been a regular before going to Benin.

After a year in Montana and another in the army, he moved to Helsinki, where he discovered the records of Nigerian Afrobeat pioneer Fela Kuti and his son Femi Kuti.

“The appealing thing about Fela’s and Femi’s big bands is this village horn sound, very raw. You can hear the lower register horn sounds, baritone sax and trombone, very clearly in the mix because everybody plays as loud as they can. That’s also part of the attraction of Beninese brass music: they play loud and never get tired. Long shows and street parades…you have to make yourself heard because of all the noise on the street.”

“I loved his work with Herbie Hancock and Terence Blanchard, and when I found out he’s from Benin, I thought I should go there and see what kind of mushrooms he’d been eating!”

Halonen lined up a stay at Villa Karo – but first visited his old bandmate, pianist Joona Toivanen in Gothenburg, just as Loueke was in town playing with Hancock. Halonen contacted the guitarist, who invited him to his hotel and put the Finn in touch with musicians in Benin.

“Lionel gave me lot of tips on how to approach their music. The key to understanding it is traditional drumming, which comes from the voodoo religion – Benin is the capital of voodoo. Like the religion, it’s very structured and determined. There are layers that you can study, peeling back the layers. Lionel advised me to record whatever music I could, to figure out what’s going on, where’s the one and so on – and to ask somebody to help me out.” 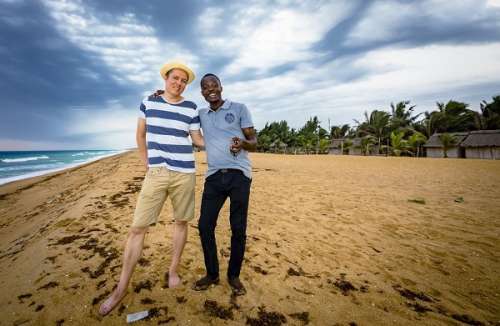 “Before I started to collaborate with Finnish musicians, I was more covering traditional Beninese music, trying to develop it and add something new that could interest people outside the country,” says Saïzonou. “With Helsinki-Cotonou Ensemble, we bring this to the next étape with many influences like pop, funk and soul from around the world.”

Benin’s brass band tradition dates back to its days as a French colony. But the backbone of the nation’s music stretches back millennia.

“Benin is rhythm,” says Saïzonou. “Our conservatory here is rhythm, that’s what you get your master’s diploma in! I have a dream of building a conservatory in Grand Popo which will focus on rhythm, all the voodoo rhythms. Because today many younger musicians are going away from that; they don’t know the tradition.

“When I play with Beninese musicians, we work with many different rhythms from different regions. We combine them to see how it goes, to develop the local music. With Finnish musicians, the difference is the harmony side. We’re not used to playing European-style jazz chords, modern chords and so on. The way we sing here, the scales we use, are different.”

“When Noël became my teacher in 2009, we had no intention of forming a band,” recalls Halonen. “We listened to a lot of records and my recordings from voodoo ceremonies, and discussed them.”

Back in Finland, Halonen began composing based on what he’d learned, for the first time writing based on rhythmic cycles or claves. “Since then I’ve tried to write melodies and harmonies that lock into that rhythmic centre, or work against it,” he says.

Saïzonou, too, was working on new material, and in 2012 Halonen returned to Benin with two other Finnish musicians for a month and a half. The result was HCE’s debut album, Beaucoup de Piment! [“Lots of Pepper!”]

That was followed two years later by Fire, Sweat & Pastis, ranked as Folk Music Album of the Year in Finland and near the top of the European World Music Chart.

In 2015, the band toured Benin and Europe and the following year Canada, including the Montreal Jazz Festival, earning different kinds of adulation.

In late 2016 the tour-seasoned band released a live album, The Road is Long. It captures energetic, reinvented versions of earlier tracks, showing of their wide range of musical affinities. On the record, “Agamafa” echoes Charles Mingus and Sun Ra, while “Adande”– where Halonen’s searing guitar solo is answered by an extended sax foray by Linda Fredriksson – brings to mind Steely Dan or any number of jam bands.

Fusion in a broad sense

“It’s not that we Finns are trying to replicate what the African guys are doing,” says Halonen. “It’s a carefully-selected bunch of people who’re all very good friends and come from different tastes and backgrounds. It’s a fusion band in a sense, even though that’s not a very trendy word.”

Their distinctive sound spurs a range of reactions.

“When we play in Benin, audiences really watch with great attention and appreciation,” observes Saïzonou. “They’re not used to applauding really loudly, but that doesn’t mean they don’t like it. I like the big applause though – it gives you power and energy.”

“Our concerts in Benin are more meditational,” agrees Halonen. “People can understand lyrics, which include a lot of social awareness and life lessons that draw on the Bible or voodoo, as well as politics in an indirect way. Elsewhere it’s more of a party.”

In April 2017, Halonen and Saïzonou sat down in Grand Popo to write songs for the group’s third studio album, to be released in 2018 through a small label, rather than DIY as its predecessors. As always, their new songs will be honed on the road, with spring and summer gigs from German clubs to a big Finnish rock festival.