The nature of folk music has always included the shameless borrowing of refreshing material from elsewhere – right now Baltic Finnish influences are rising to the top in Finland.

At the recent Etno Emma awards by IFPI Finland, accordion wizard Kimmo Pohjonen’s album Sensitive Skin was the only nominee that had no direct link to the Baltic Finnish tradition. The very essence of that tradition is present in the grooving voodoo of the album Sanguis meus, Mama! by the jouhikko shaman Pekko Käppi and his ensemble K:H:H:L, manifested through Käppi’s instrument itself but also through runo song motifs. Accordionist Anne-Mari Kivimäki’s Lakkautettu kylä (A closed-down village) offers a mix of contemporary Karelian tunes and popular wartime iskelmä songs (Finnish schlagers). The album Tii ilo, by Estonian singer-songwriter Mari Kalkun and Finnish-Australian ensemble Runorun, draws from traditional Finno-Ugric melodies. Even the harmonica quartet Sväng’s recent album Sväng Plays Sibelius has a direct link to Karelia, as our national composer was a true Karelianist who used folk music excerpts in his compositions. (Reviews of all these albums can be read on the FMQ website.)

There are several other recent folk music recordings that pay tribute to our neighbours: the originally North Karelian ensemble Värttinä found inspiration for their album Viena through a field trip to the Karelian runo singing regions on the other side of the Russian border, and the reckless debut album Raitilla by the duo Pajolaine explores the Karelian tradition through two female voices.

Is Karelia the new black?

“Karelia is always in fashion,” grins Anne-Mari Kivimäki, who is working towards her artistic doctoral thesis on Karelian accordion playing, “but the overall perception of its music is now perhaps broader, with more musicians making use of it.” Kivimäki’s own Suistamo Laboratory of Tradition is rapidly increasing the variety of offerings: since 2012, her doctoral research at the Sibelius Academy Folk Music Department has resulted in four different concert projects, recordings of these concerts, a photographic exhibition with sound, a silent film with live accompaniment and an archival discovery.

The initial spark came from a 40-second archival recording in which accordionist Ilja Kotikallio (1894- 1961) played some hypnotically repetitive folk tunes which are familiar from the kantele repertoire. The minimalistic music captured Kivimäki’s heart, both as a player and as a listener. 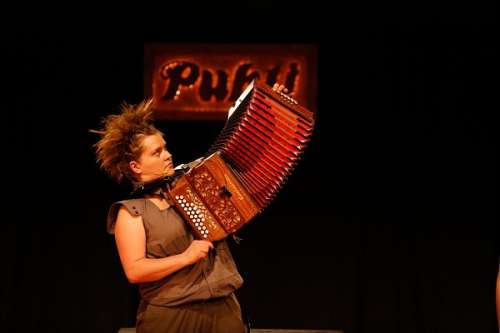 The new Suistamo music, the by-product of Kivimäki’s doctoral research, has been described as contemporary Karelian accordion trance, which Kivimäki plays on the nuanced, Russian-manufactured Notka accordions with a non-standard tuning. Her music is born out of the sounds of Karelian nature and the rhythm of travelling on bumpy roads, and is inspired by the playing and the tragic life story of llja Kotikallio, the “great wordsmith of Suistamo”.

The Finnish Literature Society (SKS) recorded 25 hours of Kotikallio’s storytelling, but it was Kivimäki who found a reel-to-reel tape in an attic, containing Kotikallio’s playing. “Kotikallio was an accordionist but also a singer, harmonica player and songwriter. He was just like one of those folk musicians who today come through the Sibelius Academy,” Kivimäki gushes about the subject of her study, who converted her into a fan of Karelia. These days, she visits different regions in Karelia four or five times a year with her working groups.

An archival recording collection featuring Kotikallio’s playing was published last summer under the title Karmuuni laulaa (The accordion sings). Las tyear was a productive one for Kivimäki on other fronts as well: her third doctoral concert – a photographic exhibition with sound entitled Lakkautettu kylä – was opened in January. The war evacuee-themed exhibition, produced in collaboration with photographer Hanna Koikkalainen, has been touring in Finland and across the border in Karelia since then. “Without knowing it at the time, we produced a very topical exhibition. It already had its own poignancy from the viewpoint of history, but the current refugee crisis links it strongly to the present day.”

Released in September, Kivimäki’s album Lakkautettu kylä features her own compositions as well as wartime iskelmä songs in fresh arrangements. The album has stayed at the top of the world music charts from the very beginning. Together with the Freija ensemble’s album Liki, it was the joint winner of the 2015 folk music album of the year voting contest, organised by the Finnish Folk Music Association.

The silent film Sijaton Sielu (The Lost Soul), which was part of the exhibition, has also brought home a string of awards from across Europe. Directed and written by Tommi Kainulainen, the short film features the duo Puhti in multiple roles, in other words Kivimäki herself and folk singer-cum-dancer Reetta-Kaisa Iles, together with dancer Timo Saari.

In November, a new self-titled album by Suistamon Sähkö was released, described as folk electro music by Kivimäki and marking the fourth concert programme in her doctoral studies. “Ilja, too, played dance music, so we wanted people to be able to really sweat it out on the dance floor.” She is joined by a familiar playing partner from her previous doctoral concerts, the folk music electronica wizard Eero Grundström. The dance moves and singing power are provided by Reetta-Kaisa Iles and dancer Tuomas Juntunen. “Our collaboration on electronics and the Notka accordion apparently sounds like a fascinating collaboration of crazy scientists!” 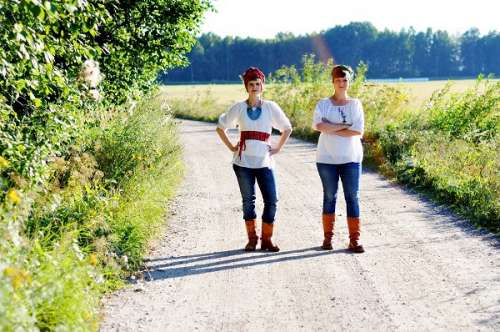 Duo Pajolaine’s singers Emmi Kuittinen and Minsku Tammela learn folk songs from live sources as well. “We were performing in Karelia when an Ingrian grandma, Impi, wanted to teach us a song which reminded her of us young girls,” Kuittinen reminisces. The song ended up on the duo’s album Raitilla, released last autumn, on which traditional Karelian tunes get a tradition-conscious yet innovative treatment. “We work on these tunes by singing and by experimenting on how different aesthetics could be portrayed – how could just the two of us sound like a village choir?”

A love for the eastern tradition can awaken even if one has grown up elsewhere in Finland. Some of Kuittinen’s roots trace back to Karelia: her maternal grandmother was a war evacuee whose stories have always fascinated her, and her father comes from the Finnish side of North Karelia. Kuittinen studied at the North Karelia University of Applied Sciences and did student exchange at the Petrozavodsk Conservatory in Russia.

“That’s where my collaborations kicked off. I have since travelled to Karelia through the Sommelo Music Festival and the Juminkeko Foundation, teaching a choir at Seesjärvi’s Paatene village, for instance.”

A new life for laments

Kuittinen graduated from the Master of Global Music programme at the Sibelius Academy, delivering her final diploma work on lamentations as a global phenomenon. “My tutor suggested that I combine laments with Indian ragas. Laments really started to speak to me when I realised that I recognised those feelings that these beautiful and even mystical texts describe. I decided then to learn traditional laments and now they have completely captured my heart.”

Kuittinen has adapted the nearly forgotten Karelian lamentation language to the point that she is able to use it to improvise her own laments. “I proceed with small steps. I want to make this feel natural to me, without being a puritan, as this metaphor-rich language is not generally understood by others,” she says. “I also try to discover my very own lamentation language which is based on Finnish. I want to keep using these two side by side in order to have a larger vocabulary to express myself with. I want to keep working closely with this subject.” Kuittinen has been revitalising the lamentation scene through her club night entitled Ilon ja surun klubi (Joy and sadness club), where she combines laments and stand-up comedy together with Miska Kajanus, as well as through a new work called Ilo pitkästä murheesta (Out of sadness comes joy), in which her ensemble Rajamailla Company combines Karelian and Persian laments with dance. 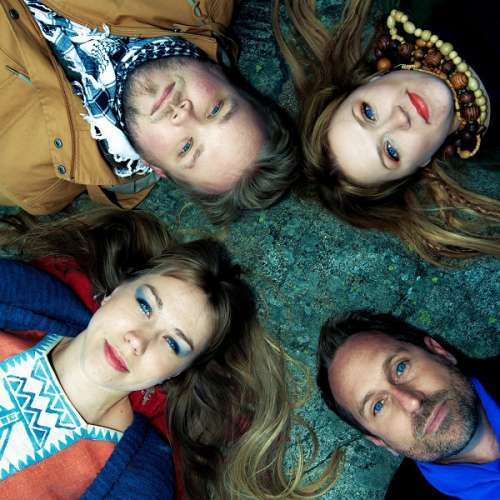 Offering a journey across the Baltic Finnish landscape, Estonian Mari Kaikun ‘s Tii ilo is the first album ever to have been nominated world music album of the year both in Finland and Estonia. Her ensemble Runorun was formed during her time at the Sibelius Academy Folk Music Department as an exchange student from the Estonian Academy of Music and Theatre.

“I wanted to hear how traditional tunes would sound when played together with someone who is not from my own culture but who shares some similar foundations. In my previous cross-cultural projects, I have felt that the deepest essence of the music or culture often fails to come through. With Finns, these obstacles have been lower and there is no need to always explain everything, simply because there are so many common elements in our cultures,” says Kalkun, who herself represents the South Estonian Võru language minority.

Kalkun invited percussionist Tatu Viitala, kantele player, singer and multi-instrumentalist Maija Kauhanen and Australian-born double bass player Nathan Riki Thomson to be part of her project. Another participant was visual artist Tatjana Bergelt, whose collage-like working method around similar themes formed a bond between the artists. A grant from the Kone Foundation enabled the participants to focus on their music project Tii ilo, which combines Baltic Finnish languages. The concert project has been in demand, and the ensemble is currently planning a record release tour to Japan.

There could be even more collaboration between Finland and Estonia. So far it has been more or less a one-way street: “It’s mainly Estonians who have hosted Finnish folk musicians, but the situation is about to change,” says plucked string player Jalmar Vabarna. The latest album of his bluegrass-inspired ensemble Curly Strings, Üle ilma, has sold more copies in Estonia than any of his previous recordings. Festivals in Finland are now also putting out the welcome mat to his other ensemble Trad.Attack!, which combines archival recordings with acoustic music. “Previously, Finnish folk musicians such as Antti Järvelä would come and teach a masterclass in Estonia. Now this new generation of Estonian folk musicians has a lot to offer in Finland as well.”

In Estonia, folk music enjoys far greater popularity than in Finland; it has a strong presence in mainstream media and at official state functions. “Perhaps Estonians have not grown accustomed to independence just yet,” reflects Mari Kalkun, “and folk music probably provides one way of connecting with one’s own roots. My view is that our cultural region is not defined simply by our national borders. Although many Baltic Finnish languages are becoming extinct in everyday life, I have found it is still possible to find common musical ground with Votian or Livonian cultures, for example. The further back we travel in time, the stronger the connections get – and not only between Baltic Finnish peoples but between any cultures. That archaic three- or four-note layer not only provides the best melodies, but the most interesting stories as well.”