The French researcher Iégor Reznikoff suggested in the 1980s that Finnish rock paintings have an echo. Decades later, researcher Riitta Rainio and her team decided to find out if this claim stands true and what the implications might be.

“Our research materials include archaeological finds or prehistoric remains located in situ”, Rainio says. “These types of source material are quite unusual in musicology, where it is more common to examine materials like sheet music sources or old manuscripts.”

In Finland, the low percentage of lime in the soil explains why discoveries of ancient instruments have been very rare. Leather drums and wooden string instruments, for example, have vanished into the ground without a trace. Metal, however, is better suited to surviving these conditions, and Rainio, a pioneer in this new field of study in Finland, wrote her dissertation in 2010 on our numerous bell and pellet bell discoveries dating back to the Iron Age (see her article in FMQ here).

More recently, however, archaeological treasures on a far larger physical scale have been discovered in Finland.

“In the 1980s, Iégor Reznikoff studied French Ice Age caves which have rock paintings or carvings on the walls”, Rainio says. “Based on his own aural experiences, he suggested that these spaces have specific acoustic qualities, and that the images and sounds are somehow connected.”

Reznikoff later visited a few rock painting sites in Finland as well, publishing an article about the echoes around Finnish sacred rocks. Rainio kept wondering about this article for many years.

“Back then, the whole notion seemed almost too fanciful and funny”, Rainio laughs.

From imagination to science

Rock art researcher Antti Lahelma had read the same article, and in 2012 a team of researches decided to go ahead with a study that would try to test Reznikoff’s theory. In addition to Rainio and Lahelma, the Finnish rock painting expedition included Professor Kai Lassfolk and archaeologists Tiina Äikäs and Jari Okkonen.

“Our objective was to undertake thorough acoustic measurements at selected sites where the environment had remained as authentic as possible since the Stone Age”, Rainio explains.

Our most famous rock paintings by Lake Saimaa, for example, were not suitable for the study as the lake’s water levels have receded considerably, altering the acoustics at the site. In the end, three sites were chosen for the study: two rock paintings in the Hossa National Park in Northern Finland, and a sieidi rock in Kittilä.

“We decided that our study should include Sámi sieidis, sacrificial stones, some of which are tall rock walls rising straight up out of the water, similar to rock painting sites.”

One theory suggests that the sieidi stones are creations of the same ancient culture as prehistoric rock paintings. This juxtaposition offers an interesting parallel to our study as there is a lot of traditional knowledge available about the more recent sieidis.

“For instance, it is known that making inappropriate noise at the sieidi sites was not allowed – only yoik singing was approved”, Rainio says. “Sámi shamans were known to go to sieidis and yoik until they entered a state of trance, which in turn means that there had been drumming at these sites as well. Some sources also mention sacred rocks responding to human sounds, so it is clear that the sieidis are connected with sound traditions.” 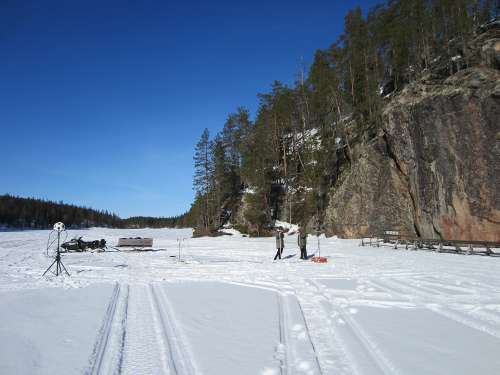 Making science at the mercy of nature

It is easy to understand why sacred sites are located by lakes, as waterways provided the most convenient passages before roads were built. A boat may have been a steady enough platform for a rock painter, but it proved to be a challenge for the research team.

“We made our first recording trip during summer as it seemed like the most pleasant time to do it”, Rainio says. “However, we had to set up the recording gear in a boat, and even having calm weather on our side during the recordings, the boat kept turning and moving to a surprising degree.”

As one of the central aims of the study was to measure the direction of the echo, the movement of the boat proved to be a significant problem. This is why the research team returned to the recording sites in winter.

“It was more accurate to measure the direction when standing on solid ice, but it was more difficult to get to the location, wading through thick snow with the recording gear”, Rainio reminisces. “Also, we wanted to leave the recordings as late in winter as possible in the hope of warmer weather, but then there was the stress of having to worry about the ice being thick enough.”

The results of the study do suggest that when sacred sites are sounded, the place – or the spirits inhabiting it – respond. This, without doubt, must have been a powerful experience for those ancient people.

The echo of sacred rocks

The ice was strong enough, and with the exception of Rainio’s frostbitten pinky finger, the measurements were successfully carried out without major complications.

“All of the sites had a true echo”, Rainio enthuses. “Each site projected back a strong echo, which distinctly originated from the sacred rock, something which was immediately obvious to us.”

After studying the materials, the direction of the echo proved to be quite clear. With one of the rock paintings, titled Värikallio (“Coloured rock”), it was even possible to calculate that the origin of the echo is exactly at the height of the paintings on the rock wall.

“Sometimes on location it felt like the echo was coming straight from the characters painted on the wall”, Rainio remembers. “It sounded absolutely magical.”

Hence, the results of the study do suggest that when sacred sites are sounded, the place – or the spirits inhabiting it – respond. This, without doubt, must have been a powerful experience for those ancient people.

“These results reinforce our initial prediction of sound and acoustics having a role in why some places have been selected as sacred sites as early as during the Stone Age”, Rainio states. 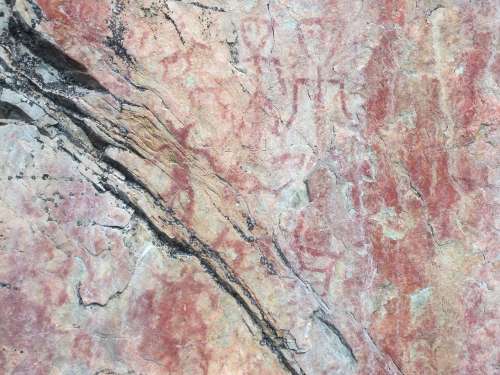 In the next stage of the study, the research team will continue their measurements at new sites, this time in the south of Finland. Technical gear has been updated, with the addition of items such as a separate, anchorable recording raft which will enable work during the summer months. The practical adaptations from the study will also move to a whole new level.

“We now have access to a new microphone system which enables us to record acoustics as a spatial sound, which can then be reproduced in a studio environment”, Rainio says.

“The acoustics can thus be simulated with convolution which adds the captured echo to sounds made and recorded elsewhere.”

This will open up new possibilities for illustrating the results of the study. There is also the potential of taking advantage of these technologies when presenting the materials to the public. For example, how good would it be to be able to go to a museum and experience a virtual journey to a Stone Age rock painting where you could hear the echo responding to your own voice?

“That would be a fantastic way to make ancient sound rituals come alive again”, Rainio says.

Main photo: The Värikallio rock painting is located on a vertical rock wall by the lake Somerjärvi. Photo: Riitta Rainio.