During her long and winding career, Iro Haarla has reinvented herself many times over. She has rolled with the punches and beat all odds to become one of the most original and soulful composers in Nordic jazz.

Perhaps it was written in the stars that Iro Haarla (b. 1956) would become a composer and performing musician. After all, both her mother and maternal grandmother were opera singers and her father a second-generation theatre actor and director.

No one knows conclusively whether blood obligated or not, but Haarla did commence studying at the prestigious Sibelius Academy in Helsinki already at the age of ten.

“Music has always been a very important part of my life, a sanctuary and a source of force,” Haarla reminisces today. “My earliest memory of a truly inspiring teacher is Izumi Tateno, but it wasn’t until I attended Heikki Sarmanto’s jazz studios at the Academy that I knew where I wanted to head. As he and Kaj Backlund taught me all I yearned to learn about the style and tradition of piano giants like Bill Evans, I was swept away by the endless possibilities of improvisation.”

Life and music with Eetu

In hindsight, and at least through the satisfaction-progression hypothesis, the next step was only logical. A new gateway to an even freer realm was opened in the late 1970s as Haarla caught the eye and ear of drummer, composer and bandleader Edward Vesala.

“Eetu got me looking at free expression from totally new angles and we soon became a good match both professionally and personally. I was happy.”

The couple married, had two daughters and worked intensely through groundbreaking albums such as Lumi (1987) and Ode to the Death of Jazz (1990) up to Vesala’s death in 1999.

“Even though Eetu was such a demanding and dominating person, it was a wonderful life – apart from the last couple of years. I learned a great deal by arranging his music for many ensembles, mainly Sound & Fury, and collaborating with saxophonist Juhani Aaltonen, trumpeter Tomasz Stanko, bassist Jean-François Jenny-Clark and others.”

Having put her ambitions as a composer on hold for close to two decades, Haarla began building her own career at the turn of the millennium with formative albums such as Yarra yarra (a duet with saxophonist Pepa Päivinen) and The Heart of a Bird (a duet with her husband-to-be, bassist Ulf Krokfors). 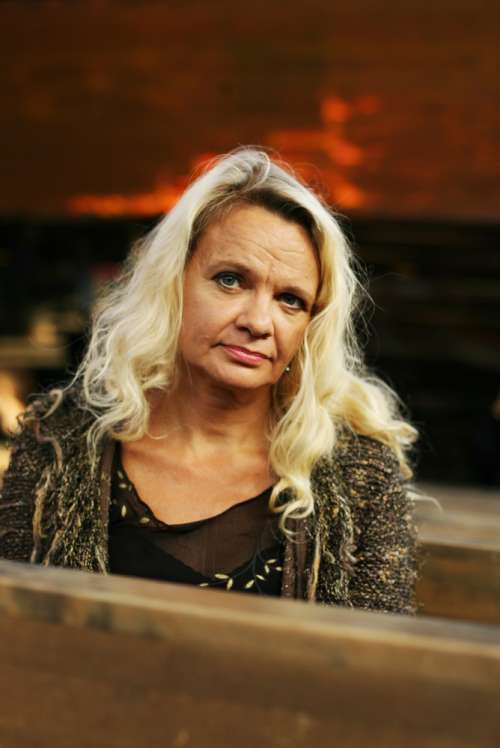 She continued working with Vesala alumni such as saxophonists Jorma Tapio and Tapani Rinne, but soon also founded her own band of top Finnish and Norwegian improvisers including saxophonist Trygve Seim and drummer Jon Christensen. The albums Northbound (2005) and Vespers (2011) came out through the legendary ECM label and shows were reviewed favourably.

“Manfred Eicher from ECM and Trygve helped me get the band going and we soon found a home in the open, slow and spacey style I was familiar with. It’s almost anti-jazz in the way that sounds, moods, melodies and ideas are given room to develop and breathe naturally.”

During her long and winding career, Haarla has reinvented herself many times over. She has rolled with the punches and beat all odds to become one of the most original and soulful composers in Nordic jazz. One particularly enjoyable aspect of her musical life is her ongoing collaboration with Juhani Aaltonen.

”We first worked together on Junnu’s album Springbird in 1977 and our most current release is the 2015 duo album Kirkastus. It feels unreal that this dear friendship already spans four decades. We are also most fortunate to have the Finnish label TUM Records releasing our music. Not a given in this day and age.”

After the taxing and intimately very meaningful large work Ante Lucem, commissioned by the Swedish Norrlands Operans Symfoniorkester for jazz quintet and symphony orchestra and released by ECM last year, Haarla has concentrated on smaller-scale projects: the duo with Aaltonen being one, her new trio with Krokfors and drummer Markku Ounaskari another. But it is still possible to go smaller and perhaps by the same token also revisit one’s younger self alone at the keyboard, learning the ropes of music.

“As I was recently preparing to perform a solo concert in Germany, it felt a little like getting back to the beginning. I realised that my original way of approaching the piano like an orchestra has never disappeared. I still hear brass and strings in my head when playing. Always. This might actually be the intrinsic reason behind the sense of space my music has.”

It may also explain why Manfred Eicher once said Iro Haarla has a special touch at the piano. But was it in any way daunting to go on stage alone after having worked in the group format so long?

“My stage fright disappeared after quite a harrowing experience in the 1980s. I was to perform Vesala’s music as a duo with saxophonist Jan Garbarek, the hall was the massive House of Culture in Helsinki and it was my first time ever playing the harp in front of an audience! Even though feeling very nervous I knew deep inside that if I can pull that off, nothing will ever faze me again. So even though it’s now been more than a decade since my last solo show, I feel very confident improvising on my own pieces.”

Iro Haarla performs at the Weserburg, Bremen’s museum of modern art, on 26 April 2017.