This band is in a class of its own: an ensemble of four harmonicas that creates its own material, drawing on Finnish folk music, Balkan rhythms and tango. Founded in 2003, Sväng put their inimitable stamp on everything they perform, demonstrating that Chopin and Sibelius too had a folk music streak in them!

The harmonica is an instrument popular around the world thanks to its versatility. Sväng are a harmonica quartet who draw on folk music in particular. The members explain that they discovered their sound ideal in 1960s Romania, specifically a group named Trio polifonica. While Sväng boasts a unique ensemble sound, the band consists of four very different musicians.

“Each one of us has a very different sound, and we use that to our advantage in our arrangements,” says Eero Grundström.

The division of duties in the group is clear: Eero Turkka and Eero ‘Geero’ Grundström play diatonic and chromatic harmonicas, Jouko Kyhälä mainly plays the Harmonetta, a harmony instrument, and Pasi Leino plays the bass harmonica. “Each one of us has an expressive idiom of his own,” explains Kyhälä. “For instance, the same melody sounds quite different if played by Turkka on the one hand or Grundström on the other. Turkka has a strong blues streak in him and a heavenly cantabile tone. Grundström is a fountain of inspiration, always an element of surprise in our arrangements.”

Occupying middle ground between melody, harmony and bass, Grundström colours the texture in a wide variety of ways, equally adept at unbridled improvisation and the meticulous study of scores. “Actually, of all the groups I play with, Sväng is the one that relies the most on written-out charts,” says Eero Grundström. “With Sibelius, for instance, we wrote everything out in detail, because otherwise we would have had to play around with the piece for a year in order to reach a satisfactory end result... Eventually, of course, we learn the pieces by heart.”

Jouko Kyhälä remarks that starting with written music is a practical necessity: Eero Turkka now lives in Bulgaria, while the other band members live in Finland. Sväng rehearses on a period basis. 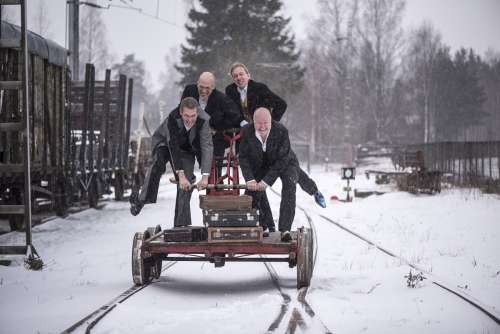 Originally established for Eero Turkka’s harmonica exam in 2003, Sväng have evolved over time. They now observe with amusement that there is no way they would have managed anything as challenging as Sibelius in the early days.

A typical Sväng disc may include anything and everything: tango, Balkan music, Finnish polska or music from the soundtrack of a Harry Potter film. But their discography also reveals efforts targeted at the music of Chopin and Sibelius, and most recently they have delved into the depths of Finnish tango. Turkka, Grundström and Kyhälä also write original music, and the two latter gentlemen are responsible for the group’s arrangements.

The core idea with the group is its unique sound, not any particular genre.

“We have quite deliberately put together smorgasbord programmes,” says Jouko Kyhälä. “This is instrumental music, so the greater the variety we provide, the less probable it is that the audience will be bored. I’m a traditional-music freak, but even I may lose interest if a programme is nothing but wall-to-wall polskas.”

“I aim to make the kind of music I enjoy listening to,” says Eero Grundström. “Our earthy aesthetic comes through quite strongly no matter what music we play. There were no tangos or Balkan pieces on the Sibelius disc, by the way, but both appeared on the Chopin disc, ha ha!”

The wonderful world of tango

On their most recent disc, Sväng goes tango (2018), the quartet takes a relatively traditional look at Finnish tangos. This was a conscious decision, because there did not seem to be very many straightforward recordings of this repertoire available. Next, Sväng consider digging deeper into folk repertoire.

Jouko Kyhälä would like to see a return of individualism to folk music. He explains that back in the day when he was a rebellious rock musician he was fascinated by the folk music practice of everyone being allowed to sound like themselves. “Today, people in folk music easily tend to drift towards a consensus of aesthetics. The ideal of individualism seems to be disappearing.”

Kyhälä notes that adding a percussionist has been suggested to the group several times. This, however, is not an option for Sväng. Joint projects are another thing entirely: for instance, Sväng have enjoyed working with Austrian accordionist Otto Lechner, and at some point in the future they hope to create a project with a prominent classical Lied singer.

The repertoire of Sväng seems to include everything but the proverbial kitchen sink – but is there music that Sväng would never perform under any circumstances? “Geero did once say that if we ever start playing Abba, he’ll quit,” says Kyhälä with a smile. “But we’ve turned down a suggestion to play Bach, for instance, because it just didn’t feel like our thing.”

Taking the opportunity to address the audience

Although the music of Sväng has no lyrics, the group does rely on the power of words in its performances. For instance, they may enlighten the audience with anecdotes such as who the dedicatee of Maggien tango is (that would be Maggie Gripenberg, Finnish pioneer of freeform dancing). If a piece has a title such as Schengen, it immediately comes across as a statement about the world today.

“If we have the opportunity to address the audience about important topics, then of course we have to take it,” says Kyhälä. “Many things in our society have become worse. The existence of art and the value of art for art’s sake are no longer self-evident, and we need to take care of cultural pluralism too. There’s a funny standoffish attitude towards folk music in Finland. In Sweden, by contrast, folk music is included as a natural element even in official functions.”

Touring abroad forms the financial backbone keeping Sväng together. They have been busy on this front; the band members reckon that they have performed in 24 countries to date. They have good things to say about their collaboration with their Austrian agent, Anne Hofstadler.

“Without gigs abroad we couldn’t continue to work,” says Kyhälä. “But it’s not sustainable in the long term, our carbon footprints are just insane. We should find ways to perform to audiences closer to home too.”

Kyhälä and Grundström have visions of passing the torch to younger generations at some point in the future, enabling Sväng to continue existing and touring somewhere in the world 120 years from now, sort of like the rejuvenation practiced by Taraf de Haïdouks. “We’ll keep on doing this as long as we’re able, mentally and physically,” declares Jouko Kyhälä. “There’s so much artistically interesting stuff to do yet!”

In spring 2019 Sväng will be touring in Germany and Austria.

The leading Finnish figures in folk music, world music and folk dance will be awarded on the Jan 10 at the Ethnogala, which will take place at Tavastia in Helsinki. Sväng has been nominated for the Artist of the Year and the Border Breaking Act of the Year categories.