America had Bing Crosby, Britain Al Bowlly, France Maurice Chevalier. In the pre-war years, every country had a charming gentleman singer who entertained us on records, radio and the screen. But lucky Finland had everything twofold. We had the Malmstén brothers, Georg and Eugen, the bright singing stars of the thirties.

Georg (1902–1981) and Eugen (b. 1907[–1993]) Malmstén were born in Helsinki, the capital of the Grand-Duchy of Finland, at the beginning of the century. They came from a musical family: their sister Greta also became a recording artist. Their father was a police detective. The family was Swedish-speaking. The brothers had similar careers: they started as military musicians, studied voice, and became popular singing idols. But they never were a brother act: to my knowledge they never appeared together. Although Eugen frequently performed Georg’s compositions, their styles were quite different, and at times they were rivals.

Brass bands were extremely popular all around the world at the turn of the century, and Finland was no exception. Helsinki even had a municipal band, and there were dozens of amateur bands: the firemen, the postmen, and numerous other vocational and civic groups had their own bands. For musical youths, picking up a brass instrument was as natural as getting a guitar today. Young Georg got his first cornet at the tender age of nine, and was soon accepted as an apprentice in the municipal band.

When Finland became independent in 1917, the young republic needed both an army and a navy. In addition to heavier armament, both required a band. The Helsinki municipal bad was discontinued to provide musicians for the new military bands. Georg joined the Navy Band, because his best friend had already joined, and the navy promised recruits a chance to see the world. In a few years he was already sergeant first class and vice-conductor of the band. The role of the navy band was not limited to military functions. They also acted as the public relations department of the navy and gave frequent outdoor concerts in Helsinki. On these occasions, they often had to play opposite the army band. In order to attract a larger audience than the competition, Georg started arranging latest dance tunes for the band.

Georg Malmstén was an ambitious musician. He studied theory and conducting at the Helsinki Conservatory, with an eye for the position of the conductor. But he also started taking voice lessons. One of his teachers was Aino Ackté, the internationally known Finnish soprano who had returned home from the Metropolitan Opera. Georg had a good tenor voice. The ambitious diva staged operas with her students. In 1930, Georg sang Caesar in Handel’s Julius Caesar. Soon afterwards he also appeared in a performance of Madetoja’s Pohjalaisia (The Ostrobothnians) at the Savonlinna Opera Festival, with Ackté in the soprano role. It looked like he would soon have to choose between the Navy and the Opera.

THE FATHER OF FINNISH POPULAR SONG

However, a third choice had already been made. After independence, record production had been almost dead in Finland. No new Finnish recordings had been made between 1920 and 1924, and music stores had to import recordings made by Finnish-American artists in the United States. After 1925 production began to pick up. 1928 was a good year, and 1929 exceptional. In that year, more than a million records were sold in Finland, and the press wrote about “gramophone fever'”. Columbia, Odeon, Parlophone, HMV and other leading companies rushed to produce new records for the Finnish market.

In May 1929, the local Parlophone agent had sent Georg Malmstén to Berlin to record – not opera, but a series of sentimental ballads. The record sold well, especially Malmstén’s own composition Särkynyt onni (Broken happiness). In order to keep its leading singer in tow, Parlophone appointed Malmstén its sales manager in Helsinki, paying him twice a sergeant’s salary. Goodbye to the navy, goodbye to the opera house.

The depression soon cut down record sales in Finland, as elsewhere. The Parlophone agency was bankrupt by 1931, and Georg Malmstén lost his job. But he was not out of work, as he had already established himself as one of the most popular singers in Finland, and his recording contract was soon grabbed by Odeon. In 1931 he had appeared in the first Finnish talkie, and with one thing leading to another, he was soon making a series of musical comedies for the screen. In 1935 he joined the Dallapé orchestra, the most popular dance band in Finland, for a season, and continued to record with the orchestra throughout the thirties. His discographer Rainer Strömmer reckons that during his career, Malmstén recorded more than 800 sides.

Practically all of Georg Malmstén’s most popular recordings were his own songs. More than anyone else, Malmstén is the father of the modem Finnish popular song. At first, he just composed the melodies. Malmstén came from a generation of bilingual Finns. Swedish was his first language, and on some early recordings he had occasional problems with Finnish vowels. Throughout his career he continued to write and record songs in Swedish, but for Finnish-language lyrics, he relied on his friend R. R. Ryynänen. But Malmstén’s command of the Finnish language improved over the years, and by the forties he was ready to write the song Stadin kundi, perhaps the best song ever written in Helsinki slang. 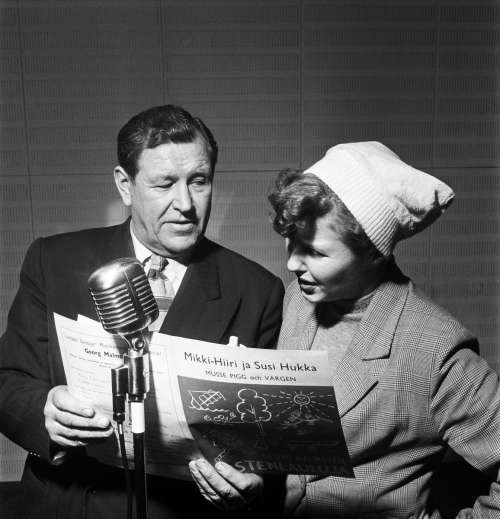 What kind of songs did Malmstén write? His best-known songs glorify Finnish women (Leila, Liisa, Amalia, Maija, Katariina, Kyllikki) and places (Karjala, Saarijärvi, Seiskari). But the main attraction of the songs is their memorable, singable melodies. Malmstén’s songs are in the tradition of the popular Viennese composers. They have the same fundamental optimism about of life. But of course they are Finnish, not Austrian. For the Danube and the Burgtheater, substitute the icy waters of the Baltic and the workingmen’s hall in Käkisalmi. Instead of violins, there are accordions. But the melodies are just as sweet and haunting as Strauss or Lehar at their best.

Georg Malmstén’s songs are Finnish evergreens. They are still played and recorded frequently. For instance, the well-known opera singer Matti Salminen just recorded an album of Malmstén melodies. However, there is an even better reason why every Finn over forty knows Malmstén. In 1934 he started a series of children’s records based on the adventures of Mikki Hiiri – Mickey Mouse. The name was obviously inspired by the Disney character, whose films had already been shown in Finland, but the songs were pure Malmstén. Georg was the narrator, and the role of Mickey was sung by his little sister Greta. Mickey and wolf, Mickey shipwrecked and Mickey and the Troll were featured regularly on “Uncle Markus’ Children’s Hour” on the radio for twenty years, and they never failed to thrill listeners.

Georg Malmstén was born in 1902, his brother Eugen in 1907. Five years is not much, but for teenagers it is a generation. Georg had grown up in a musical world of marches, operas and operettas. When Eugen was nineteen, in 1926, the first American jazz group – featuring Finnish-American players – appeared in Finland. Eugen was hooked. He became a dance musician, and his first band was called the Hot Five. Jazz enthusiasts need not be told the name of his trumpet-playing idol.

Eugen Malmstén soon became one of the top bandleaders in Finland, and one of the best “hot” soloists. In 1934 he founded Rytmi-Pojat (The Rhythm Boys), the first modern big band in Finland, and signed a recording contract with Columbia. Eugen also made hundreds of records. On records he was usually featured as a singer performing popular tangos, waltzes and fox trots, with the Rhythm Boys playing politely in the background. Eugen once told me that he asked the record company to let him cut some hot tunes, but was told that they were not commercial enough. Perhaps this was a realistic judgment of Finnish tastes in the thirties. Fortunately a test recording of the band playing Broadway Rhythm survives, proving that the band could also swing when required.

Although Eugen was primarily a bandleader, he also wrote a number of popular songs. His greatest success was Sä muistatko metsätien (Do you remember the forest road), written in 1938 and revived thirty years later by Erkki Junkkarinen. It is a sentimental waltz, which once again proves that beneath the surface most Finnish musicians you will find a secret love for minor-keyed melodies.

From 1939 to 1945, the war interrupted show business in Finland. Public dances were forbidden, and most musicians were recruited to the armed forces’ entertainment unit. Georg and Eugen, like many others, gave concerts in military hospitals, on ships and in trenches. Both made some remarkable recordings. What We’ll Meet Again is to the British and Lili Marleen to the Germans, Eugen’s Elämää juoksuhaudoissa (Life in the trenches) is to the Finns. Georg recorded a series of bloodthirsty anti-Russian songs which were great hits with frontline troops but were quickly buried after the armistice. Very few people have heard them during the past four decades, but perhaps enough time has now passed so that they can be recognized as historical documents of those difficult times. 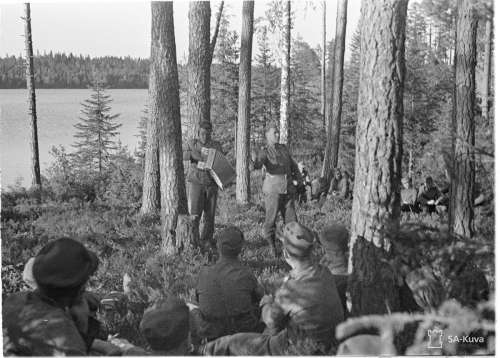 After the war, a new generation of popular singers captured the attention of the younger audience. Big bands were no longer economically feasible. Olavi Virta, Henry Theel and Tapio Rautavaara were the new singing heroes of the screen. At first, both Georg and Eugen continued their careers as performers, but they were no longer at the top. Eugen now revealed an unexpected talent for comedy and continued to entertain audiences with funny, swinging songs – many of them written by brother Georg. At 81 [in 1989], he still performs occasionally. His memory is sharp as a razor. I recently phoned him about the personnel on an obscure record he had made back in 1939, and he rattled off the names of the sax section like they had just made the record last week.

Georg turned to his father's line of work. In 1948, he became the conductor of the Helsinki Police Band, leading parades and opening innumerable exhibitions. In this role he became a very successful public relations man for the municipal police force. He did not leave show business completely: he was a frequent guest performer in the early years of Finnish television, and continued to record up till the sixties.

In 1964, Georg Malmstén published an autobiography, where he described himself as an “incorrigible optimist”. Everybody who ever met him certainly agrees. I would not hesitate to call the music of the Malmstén brothers “optimistic”.

This article was first published in FMQ 1/1989 and is now (January 2022) re-published with the kind permission of the author.