“Somehow there has to be something new, and somehow the composer has to challenge himself. But employing completely new means of expression or playing around with the concept of art are not in themselves necessary for creating meaningful art.” So says composer Lauri Kilpiö, whose new piano concerto Shades of Light traces a broad arc from tradition to the present day, acknowledging both Beethoven and the aesthetics of noise.

Composer Lauri Kilpiö achieves closure to an extensive work process on 3 November when his piano concerto Shades of Light is premiered by pianist Joonas Ahonen and the Tapiola Sinfonietta at the PianoEspoo festival.

The first movement of the concert was completed as far ago as spring 2012, and Ahonen performed the first two movements with the Uusinta chamber orchestra at the Time of Music festival in Viitasaari in summer 2013. Kilpiö notes that the solo part was completed up to the end of the third movement at that time, but it was not until this year that he wrote the orchestra part to the third movement and the entire fourth movement, based on his original plan for the work.

Motifs and their interconnections play an important role in Shades of Light. In the first movement, the motifs consist solely of unpitched noises. Their profile stems from other variables such as rhythm, colour and height of tone, and when they recur in the second and fourth movements, they are converted into definite pitches. Kilpiö shows in the score how the noise motifs of the first movement build up into phrases and larger units. “This is pretty much Beethoven!”

This is not the first time that Kilpiö has written noise music. His clavichord piece Poème de jeux acoustiques (2009) and its sibling work for guitar, Chants de joie, fureur et danger (2016), employ a variety of imaginative noise effects instead of traditional techniques. On the other hand, his orchestral work Sinfoninen kuva (Symphonic image, 2017) shows Impressionist influences, while the third movement of his piano concerto is virtuoso writing with proper notes only.

“Noise music is just one aspect of my work, not the only one and not even the most important one; but it’s something I’ve wanted to pursue.”

In the piano concerto, the soloist produces noises for instance by rubbing a glass bottle across the piano strings and by knocking on the frame of the instrument at various locations. The highly detailed score comes with specific instructions explaining what are known as ‘extended techniques’. Kilpiö, himself a pianist, regards experimenting with ideas in practice as an important part of his work process. He commends musicians who have embraced the challenges of noise music. “Joonas Ahonen, for instance, is open-minded and really good.” 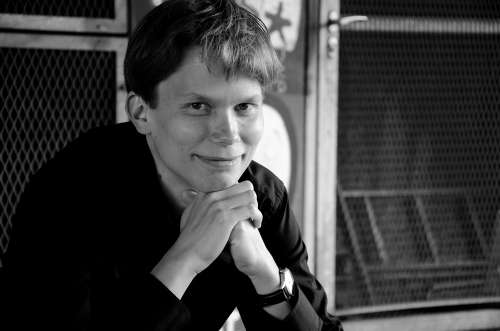 Many things that have initially seemed alien and difficult to musicians and listeners alike have become more familiar and accepted over time. Does Kilpiö agree that music is constantly evolving?

“Music will continue to evolve as long as there are people seriously engaged with it. But this progress does not necessarily go forward, it can also go deeper. I don’t pretend that my music is better than that of Bach or Beethoven, it’s just that composers today have a broader palette of expression to work with.”

Approaches in contemporary music that breach boundaries and explore new dimensions are often described as ‘avant-garde’. What is Kilpiö’s take on this concept?

“The avant-garde is a historical phenomenon; after all, it has already been a century since Marcel Duchamp’s famous pissoir. The avant-garde has generated interesting works and forced us to reassess the concept of art, but I’m not sure whether the idea of a radical regeneration of art is possible any more in the sense that historical avant-garde movements conceived of it.”

“Noise music is just one aspect of my work, not the only one and not even the most important one; but it’s something I’ve wanted to pursue.”

Kilpiö feels that there is relatively little that is avant-garde in Finnish music today. He finds some traces of it in the very youngest generation and also mentions composers Ville Raasakka and Antti Auvinen. Is breaking the mould a prerequisite for creating art of a high calibre? “Somehow there has to be something new, and somehow the composer has to challenge himself. But employing completely new means of expression or playing around with the concept of art are not in themselves necessary for creating meaningful art.”

Kilpiö describes modernism as being more familiar to him among artistic traditions than the avant-garde. He notes that modernism has had a strong presence in Finnish music, inevitably because of Paavo Heininen’s extended tenure as a composition teacher and eventually Professor at the Sibelius Academy.

“I have no problem with emphasising my links to tradition – I just referred to Beethoven in connection with my piano concerto – whereas for an avant-gardist it might be anathema. Cultivating a relationship with tradition feels natural in the Finnish context. If our music history were loaded with an overwhelming burden of tradition, as in the German-speaking countries, for instance, there might be a greater need for breaking free of it.” Kilpiö further notes: “Before you pigeon-hole me as a modernist, I should note that I don’t unreservedly understand the ideological sort of belief in progress in the arts. I have certain doubts as to the theories of the avant-garde and modernism, but I can take what feels appropriate from both approaches.”

Teaching to keep up with the times

Kilpiö also teaches composition at the Sibelius Academy. What does working with students bring to his work as a composer?

“If you demand certain qualities from your students, you must demand them of yourself too. With someone beginning their studies, I have to think about what is essential about composition technique. I actually find myself questioning my own views and habits. With advanced students, the challenge is to help them go forward, to support their personal development and, of course, to keep up with them.” Kilpiö says he learns much from his students and also gets ideas from them.

Kilpiö’s next project is a chamber opera. “My intention is to write something other than bel canto for the human voice. Extended techniques will also be involved somehow.”

But first there’s the premiere of the piano concerto. “It’s a relief that the job is finished and the concerto will finally be performed. I’m not so concerned about how the noise effects will work as I am about how the movements work together as a whole. I’m taking a calculated risk in this.”

On May 25 the BBC Symphony Orchestra performs an evening of Finnish orchestral music, chosen by Chief Conductor Sakari Oramo. Lauri Kilpiö's Shades of Light is one of the works performed.