An opera inspired by the Hungarian Uprising of 1956 had to wait more than 50 years to be properly performed at an opera house. On stage in Budapest, this opera seems frighteningly topical, again.

In the final seconds of the performance, ‘Simon’, one of the leaders of the Hungarian Uprising, is stabbed to death with bayonets, and the Commissar turns his searchlight on the audience at the Hungarian State Opera, in the heart of Budapest.

Are there any dissidents in the house? Anyone else we should dispatch?

This is the chilling conclusion of the opera Kaivos [The Mine] by Finnish composer Einojuhani Rautavaara in its premiere stage production after over half a century practically in limbo.

Rautavaara was inspired to write the libretto for the opera listening to tales told by Hungarian refugees in Zurich one year after the Uprising, in summer 1957.

This was a sensitive topic in Finland, which in the 1950s was walking a diplomatic tightrope as a neutral country bordering the Soviet Union. At a meeting between the composer and the then Director of the Finnish National Opera to discuss the staging of the opera, references to the Soviet Union in the libretto were amended: the Commissar became the Prefect, and the setting was changed so as to refer to the Spanish Civil War of 1937. Despite this, the opera was never staged at that time, partly because of hesitation on the part of the FNO and on at least one occasion because of a temporary ban imposed by Rautavaara himself. The opera was not premiered until April 1963, and then as a TV production by the Finnish Broadcasting Company (YLE).

The composer later reinstated the bits that had been censored. The opera was given its first live performance in concert in 2010, followed by a recording released by Ondine, and Rautavaara was enthusiastic: “The Mine is perhaps the best opera I have ever written, a real thriller whose underlying theme – that a human being defines himself through his choices – is nevertheless universal,” he wrote in the liner notes.

In a diary entry dating from that time, he surmised that he would not live long enough to see the opera produced on stage. And he was right. Einojuhani Rautavaara died on 27 July 2016 at the age of 87, and in October 2016 Kaivos was performed at the Hungarian State Opera as part of the 60th anniversary commemoration of the Hungarian Uprising of 1956.

Music on the dark side

Rautavaara wrote Kaivos after having studied dodecaphony with Wladimir Vogel in Switzerland. It was there, in Zurich, that he met the Hungarian refugees who prompted the genesis of the opera; he had travelled with his teacher to attend the first staged performance of the opera Moses und Aron by Arnold Schönberg, the big daddy of dodecaphony.

In Kaivos, twelve-tone technique combines freely with stylistic quotes and triad harmonies, although Rautavaara was not yet as free with these tonal-sounding elements as in his Third Symphony or indeed as in his serene late period.

The music here is dark and heavy, as befits the story. Part of the reason for this darkness may be ascribed to the composer’s life situation. According to the composer’s free-form autobiography Omakuva [Self-portrait] (1989), when he completed the last act of the opera in 1963 his family life was hell. It was around this time that he took an axe and hit his then wife on the head, “in the grip of a Panic terror”, as he told the author of his most comprehensive biography by far (Samuli Tiikkaja: Tulisaarna. Einojuhani Rautavaaran elämä ja teokset [The Fire Sermon. The life and works of Einojuhani Rautavaara, 2014], see the FMQ review here).

One of the causes of the furious domestic arguments was the leading female role in Kaivos. Rautavaara wanted a young, girl-like singer, but his first wife Mariaheidi Rautavaara – an excellent singer but substantially different from Rautavaara’s vision for the part – demanded that she be cast in the TV production. Horrified and remorseful after his assault with the axe, the composer deferred to his wife in virtually everything. Mariaheidi’s acts of revenge, including assaults with a new axe, led to the composer being bruised and scarred and sustaining permanent damage to one ear and one eye.

Yet he continued to write one masterpiece after another. 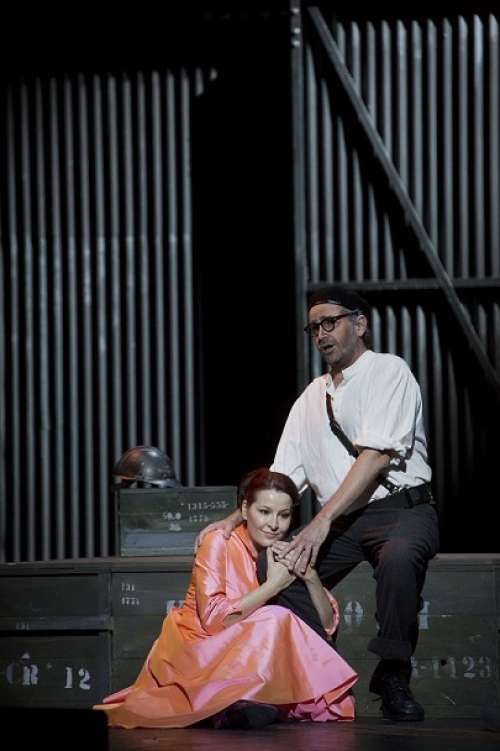 At the beginning of the opera Kaivos, we see an uprising where miners have taken over the mine where they work and captured their political supervisor, the Commissar. Simon, a former partisan hero, happens to arrive on the scene and is enlisted as the leader of the movement, though Simon has been more interested in the welfare of his young protégée Ira.

The young Rautavaara, writing the libretto himself, took a stand against single-party dictatorship. He describes the workers as being held “under the sickle”. Simon considers the Commissar to be a charlatan employing dialectics learned “across the border”. The Commissar’s ideology robs the individual of the right to be one.

On the other hand, the setting is not as black and white as one might imagine. The Commissar is a man of the people who is convinced of the justification of the ideology. Simon is an outsider and certainly no saint: he even shoots at his own people, hitting Ira by accident. Inspired by Jean-Paul Sartre, Rautavaara meditates at some length in the libretto on the choices of the individual and how compelled and how defining they are.

These meditations do not fully justify Ira’s irrational decision to release the Commissar from his bonds or Simon’s decision to allow the Commissar to escape and send his forces to retake the mine. Or perhaps this is a reflection of the self-destructive streak that led Rautavaara himself to attempt suicide by overdosing on pills? It was not until the 1980s that he found happiness in his life, having divorced his first wife and married a young singer, Sinikka (Sini) Koivisto (Sini Rautavaara from 1982).

But for all this, there is a glimmer of hope at the ending of Kaivos. The possibility of a Third Way opens up as a wall collapses and an abandoned mine passage is revealed. In the composer’s vision Simon does die, but the final tableau is of the group of miners emerging from the earth under a free sky.

All this is very surprising when we consider how apolitical Rautavaara was in his later years and how insistent he was about “writing music in an ivory tower”. When I interviewed him in 2005, after he had recovered from an aortic rupture and months in a coma, he declared that he had returned to life for only two reasons: his second wife Sini and writing music.

But he had not retreated to his ivory tower suddenly. In 1975, he was still self-critically addressing the problems of societal participation and withdrawal in the chamber opera En dramatisk scen [A dramatic scene]. In this opera, a composer imagines his family (the characters being named with the actual names of Rautavaara’s wife and son at the time) in a situation where a friend asks for refuge in the composer’s home for himself and a wounded rebel at the time of a military coup. The composer refuses them entry because he wants to be left alone to write music and calls the police. Too late, he notices that the wounded rebel is his own son.

En dramatisk scen was withdrawn by the composer and to this day has not been premiered. Kaivos, however, is alive and well, a rare testament to Rautavaara’s early social conscience.

The production in Hungary revealed that Rautavaara’s use of the orchestra at the time was still rather rough and thick. The horns often double the singers, and in Budapest they actually obscured the singers at times, even though the cast was an excellent one: Tommi Hakala (Simon), Adrienn Miksch (Ira), Béla Laborfalvi Soós (Commissar), Péter Fried (Priest) and Atilla Kiss B (Marko). Soós, true to the libretto, was a more decisive and intimidating presence on stage than Hakala’s Simon, who despite his vocal qualities was not really convincing as a partisan hero.

Finnish-trained Hungarian conductor Tibór Boganyi and the orchestra gave a fine reading of the score. But I must beg to differ with Rautavaara on one thing: Kaivos, which clocks in at about 75 minutes, cannot be described as his best opera in terms of music or character development, although in terms of the dramaturgy of a closed space it is certainly one of the tightest and most interesting.

The plot leads increasingly deep into the mine (and the human psyche), and director Vilppu Kiljunen and set designer Antti Mattila depicted this admirably. The costume budget was smaller than promised, but costume designer Piia Rinne managed to find suitably scruffy clothes at a local recycling project.

This production of Kaivos raises hopes of new productions of Rautavaara’s later, more mature operas from Thomas to Rasputin. Although many of these were recorded soon after their premieres and have been performed abroad, his operas have not yet attained the sort of success achieved by L’amour de loin, an opera by another Finnish composer, Kaija Saariaho, that has been performed, for example, at the Salzburg Festival, in Paris, in London and in Helsinki (and from 1 December 2016 at the Metropolitan Opera in New York; see the FMQ interview with Saariaho here). 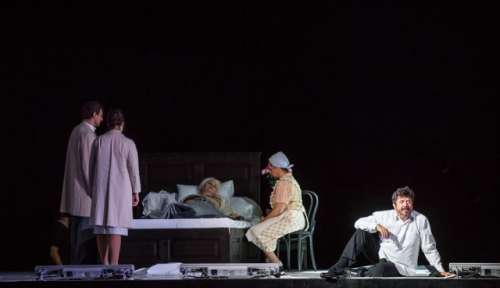 In Budapest, Kaivos was paired on a double bill with another premiere, the opera Szerelem [Love] by Judit Varga. Its libretto is based on short stories by Tibor Déry, which were also the source for a classic Hungarian film scripted by Déry and Péter Bacsó and directed by Károly Makk in 1971.

In this story, an oppressive Stalinist system has imprisoned a man, and his wife spends the dying days of her mother-in-law by spinning her stories about him having emigrated to the USA and being hugely successful there.

Some Hungarian audience members had a hard time coping with the farcical comedy that Vilppu Kiljunen made out of the stories. Varga’s lucid music, which gave space to the singers, was also like light relief after Rautavaara’s sombre orchestration.

However, both the performance and the music took a more serious turn when the man, whipped and abused, returned from prison to his wife – only to disappear again, perhaps permanently, in Kiljunen’s interpretation of the ending.

The searchlight is on, again

But the image that was left haunting everyone was the searchlight turned on the audience by the Commissar at the end of Kaivos.

In the 2010s, the leaders of many countries – Hungary included – are seeking to curb the freedom of the press. Technology today allows leaders to monitor the thoughts and actions of citizens in ways that the powers that be at the time of the 1956 Uprising could not even have dreamed of.

The searchlight is on, again, and it is pointing at us. This makes Rautavaara’s Kaivos a terrifyingly topical work. Again.