The story of the electric guitar is viewed through the inspiring work of three Finnish guitarists: Hasse Walli, Jukka Tolonen and Albert Järvinen.

The guitar is a relatively young instrument in Finland. If you wanted to study the guitar in the fifties, you had just two choices. The author of the best-known tutor for classical guitar was Ivan Putilin, who ran his own music school in Helsinki. Putilin was in his time the leading classical guitarist in the country, and the tradition of classical guitar playing in Finland more or less stems from Putilin and his pupils.

If your choice was plectrum guitar, your man was Viljo Immonen, whose tutor was the only alternative to Putilin's. Immonen was a many-sided personality, guitarist, singer and writer, but he was not so much in the limelight as an instrumentalist. The best known plectrum guitarists of the fifties were Ingmar Englund and Herbert Katz. Englund was a reliable studio musician who claimed to have played on more than 5000 recordings ­- usually drumming competently in the background. Katz was an inventive soloist in the Charlie Christian style. He played electric guitar in many important jazz groups of the decade.

By the sixties the electric plectrum guitar had become well established in popular music and jazz. The man most frequently employed in broadcasting and recording was Heikki Laurila. Laurila is a technically versatile and always tasteful player, who can easily blend into any surroundings. Most of his work has been in dance and popular music but he can also play elegant solos in the mainstream jazz idiom. Laurila is still a respected instrumentalist today.

However, by the early sixties, a new generation of guitar players had already stepped to the limelight. The advent of rock and roll in the fifties had already emphasized the role of the guitar, but at that time there were not yet any real rock guitarists in Finland. In the early sixties several British and American instrumental guitar groups such as the Ventures and the Shadows became well-known internationally. In the 1963, the Beatles, who added vocals to the background of two electric guitars, bass guitar, and drums, burst to worldwide fame.

Suddenly the electric guitar had become the most important solo voice in popular music. There were now hundreds of aspiring young guitar players in Finland, and even players with relatively brief experience could start groups and get jobs playing at dances. The Beatles would not come to Finland, so any group whose name had an English noun in plural form would do: The Sounds, The Strangers, The Esquires, The Avengers, The Adventures, The Strings, The Blazers and so on ad infinitum.

Following the popularity of instrumental guitar music, dozens of local groups were also given a chance to record at least one single. Most of these recordings sold very badly at the time. It was all right to hear these groups at a local dance, but record buyers usually preferred the recordings of well-known international favourites to local groups. Most of these teenage groups were amateurs in every sense of the word. They had only an elementary technique, and for most of them, music was just a pleasant hobby, abandoned when they got regular jobs and started families.

However, with the passing of years, these recordings have acquired the golden glow of nostalgia. Many of the recordings of these early rock groups are now highly prized collector's items, and in spite of the amateurish playing and often shoddy sound they emit a certain freshness and inventiveness, witnessing of the player's dedication to their music. Moreover, the groups gave the guitar a new status. The electric guitar now became the most important instrument in popular music, and the most talented of the young players became professional musicians - instrumentalists, singers, arrangers, producers.

As the decade drew to close, the simple rock of the early sixties gained new dimensions. The world soon saw a new generation of guitar players, who had acquired an impressive technique and also learned to use the creative potential of electrical amplification in new ways. lnternationally, the leading names of the new generation were, of course, Eric Clapton and Jimi Hendrix. A similar development was taking place in Finland, and of course in many other countries, too. In Finland, the most influental guitarists of the seventies were Hasse Walli, Jukka Tolonen and Albert Järvinen.

The first of the new guitar superstars in Finland was Hasse Walli (born 1948). Walli had played in various short-lived rock groups, and made his first recording with a group called The Jormas in 1966. At this time, his idols were the Bluesbreakers, a group which featured Eric Clapton.

In 1967, Jimi Hendrix visited Helsinki. Hendrix was still relatively unknown, and the concert was not all that well attended, but it made a tremendous impression on Walli. ln the same year he formed a group called Blues Section. Blues Section was the first “progressive” rock group in Finland, and the first group to record a “concept” album. Walli was the leading soloist, and his soaring guitar dominated the group's sound.

Blues Section lived only two years. From the commercial point of view, it was only moderately successful. Artistically, however, its influence was unquestionable. It was the first rock group to be taken seriously also in the jazz field. Its qualities were appreciated by critics far outside pop circles. lts high standards encouraged subsequent rock groups to write original material, to use larger compositional forms, and to record performances lasting longer than the conventional three minutes of a single record.

After the Blues Section broke up, Walli followed the usual trail: stints with the Otto Donner Treatment, the Eternal Band, Unisono, Punainen Lanka, Manifest, Planets, Feedback and so on. Piirpauke, a group which he joined in 1974, was an important new dimension. The group, founded by saxophonist Sakari Kukko, played mixture of jazz, rock, Finnish folk music, and various other ethnic idioms. After Piirpauke, Walli got deeply interested in urban African music, and spent long periods in West Africa. In 1982 he introduced a new group, Hasse Walli Dakar Sound, in which he played with Finnish and Senegalese musicians. Since then, he has led several similar groups, which did a great deal to create interest in world music.

"THE PRESIDENT OF THE REPUBLIC"

Jukka Tolonen (born 1952) was only eleven when he first saw the Beatles on television, but he quickly started a band with his cousin. He had been taking piano lessons (and continued to do so until the age of 15), but in the atmosphere of the sixties the guitar was a much more attractive instrument. On the guitar Tolonen is self-taught, but he began to attract considerable attention as an instrumentalist when he was still in his teens. His main influence was obviously Eric Clapton.

ln 1969 Tolonen started a group called Tasavallan Presidentti (“The President of the Republic”). At that time he was still in high school, but the group soon replaced the Blues Section as the country's leading progressive rock group. Their first album was released in December 1969, and three more followed in due course.

Tasavallan Presidentti also attracted considerable attention abroad. They toured England twice and played regurarly in the Scandinavian countries. To a large extent, their success was due to Tolonen's virtuoso guitar playing. ln 1971 he made his first solo album, Tolonen!, which was also released in the UK and the USA. After the breakup of “'Presidentti”, Tolonen continued as a solo artist, leading own groups and touring many European countries. Since 1980 Tolonen has mainly lived in Denmark and spent most of his time outside Finland.

Although Tolonen belongs to the generation of guitarists which accepts the possibilities of amplification as given, his musical thinking is basically traditional, like much fusion music of the 70s. He draws his influences equally from jazz and rock, and enjoys playing the acoustic guitar or moody piano solos as well as the electric instrument. 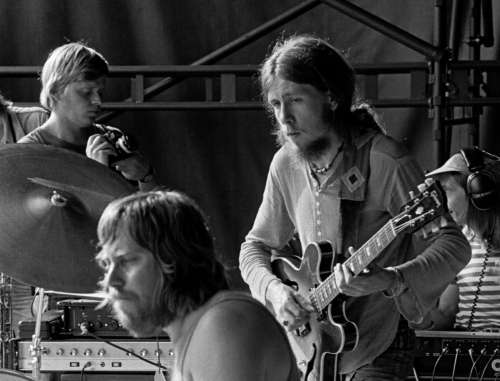 Pekka “Albert” Järvinen, the third important Finnish guitarist of the seventies, was born in 1950. He started studying classical guitar with Ivan Putilin in 1962, but switched to an electric model in 1965. The rest of the story is familiar: short-lived bands, jobs backing popular singers, tours and now-forgotten records. ln 1972 he was asked to join the Hurriganes (sic), a trio which had gained a large and enthusiastic following by playing basic rock and roll loud and fast. The group's main attraction was the frenzied drumming of the its leader Remu Aaltonen, but attention of musically-inclined listeners was soon draw to Järvinen’s guitar leads.

Commercially, the Hurriganes became the most successful rock group in Finland in the seventies, with several gold and diamond albums and sold-out concerts all over Scandinavia (their sole UK appearance was a total failure, as the promoters had ill-advisedly tried to bill their music as punk-rock, and a dissatisfied listener managed to hit Remu in the head with a bottle). The Hurriganes represented pure masculine power, unfettered by aesthetic and ideological motivations of Tasavallan Presidentti and Blues Section. As the star soloist of the group, Järvinen must have inspired hundreds of hopeful youths to take up the guitar.

The music of the Hurriganes had allowed Järvinen only a limited scope of expression. Although he was sympathetic with the group's style, and obviously felt at home playing basic rock and roll, he was a highly inventive soloist whose capabilities were not fully utilized in the group. In 1974, while Remu was serving a brief jail sentence, Järvinen recorded a solo album, Ride on, which presented him playing a much wider variety of rock, blues, and jazz idioms, in the company of guest artists well-known within these idioms. Inspired by the success of the album, Järvinen left the Hurriganes and started his own trio, the Royals, in 1975.

The Royals was the first Finnish “supergroup”. The group was already famous before it had made any public appearances, and it toured with the biggest light show ever seen in Finland. Bassist-singer Paavo Maijanen and drummer Ippe Kätkä were also well-known musicians on their own right (Maijanen was later to become the most successful Finnish record producer of the 80s), but above all, the group was a showcase for Järvinen's talents, and it had several quite successful years until the group broke up in 1978.

During this period Järvinen had also played with many visiting British musicians, and there were frequent rumours that he was going to join Dr. Feelgood, Elvis Costello or some other equally well-known group. All this came to nothing, and in the eighties his star began to wane. There were frequent changes of groups and stories of personal problems, and by the end of the decade Järvinen had more or less faded out of sight. Fortunately, he has not quit music. Last year he was again appearing in public and even participated in a recording session. However, he is now overshadowed by a new generation of guitarists who originally drew their inspiration from him. [Järvinen died during a concert trip in London on 24 March,1991, aged 40.]

In the eighties, no guitarist in Finland has become an idol and inspiration to other musicians in the same way as the three superstars of the previous decade. But perhaps this is more a sign of progress than of failure. Thanks to the inspiring work of Walli, Tolonen and Järvinen, both the status of the electric guitar and the number of its players has considerably risen. At the top, there are now at least a dozen highly competent professionals ready to tackle any job, even if choice is pedal steel or dobro. The number of young hopefuls appearing every year is amazing. The electric guitar has certainly become a Finnish instrument.

This article was first published in the FMQ 1/1991, and is now republished with the kind permission of the author.

Featured photo by Jukka Pääkkönen: Albert Järvinen on a Hurriganes gig in 1980.