Colour is important in the composition process of Pekka Airaksinen, pioneer of Finnish experimental electronic music.

Pekka Airaksinen (b. 1945) was the key figure in the musical underground movement in Helsinki in the late 1960s. He was the musical leader of the performance group The Sperm, a collective arranging happenings from 1967 to 1970. But he also had abstract oil paintings on display at exhibitions held by the Elonkorjaajat (The Harvesters) artist community from 1970 onwards, and he played the piano and guitar in American beat-artist shows (Omar Williams Experience). Since then, he has released over 60 recordings, mainly of electro-acoustic music.

Over time, Airaksinen has developed an original system of composition in which deep and abstract conceptual meanings can be transferred in the musical structure. Colour also acquires meaning in this system. Though Airaksinen has expounded his method, a lot still remains hidden or puzzling. He uses his method as a means of freeing himself from the deep-rooted aesthetics of Western music. For him, music is not only music; it is also capable of activating the mind, producing abstract thinking and creating associations. Colour, the visual, is one element of his method.

Colour has two functions in Airaksinen’s composition process. On the one hand it signifies sound colour – often both familiar and strange, as if viewed in a distorting mirror. He does not, however, pay any attention to it until the idea for the composition has been formulated.

“Say you’ve got an idea, like a recurring motif; you might create the sound spectra or sound colour by changing the modes imaginary. You can filter the sound material to correspond to a harmonic minor or Pythagorean scales or something else. The sound material is in several layers and you can construct harmonic series on them to create different shades,” he says.

On the other hand, colour, in the composition process, signifies a certain kinetic energy that is devoid of any human emotion and is pure physics. The colours characterise superimposed sound layers, each with its own specific tone centre, tone row or scale and energy.

“When the starting point is an idea, like I have, I first transform the conceptual information into numbers, then, using my own matrices, into four layers you can think of as energy layers. The solid layer is yellow, the moving layer is blue, the upward-moving layer is red and the open-in-all-directions layer is green. In a way they are colour abstractions. Each layer has its own tone row and can be further developed in the manner of music.”

Naturally the listener cannot detect which theme or concept the music is expressing. The music of Airaksinen does, however, generate a wealth of mental images and associations – maybe because it has many overlapping layers and each constitutes a distinct sound world of its own. This music is not a fully homogeneous, harmonic entity; rather, it consists of divergences that sound simultaneously. There are lots of stimuli and some are beyond our ability to observe them, since it is impossible to concentrate on everything at once.

Making music is, for Airaksinen, also a way of examining how music generates mental images and associations. “When music has a non-musical starting point, a shape and a musical Gestalt based on meaning, it may yield very many mental images. My music provides a chance to enter a spatial domain that is a combination of musical and visual. It has shapes and colours, events and contents,” he explained in 2001.

Result of a creative break

Airaksinen arrived at his composing system in the late 1970s.

“After the underground stages and the ‘magic orchestra’ Omar Williams Experience, I didn’t really come up with anything much. A creative break, I suppose you could say. I had just started meditation practices and other things. Then I began seeing the different things I had been thinking in different places, like in the mindspace, so to say. They began drifting towards each other. When they arrived at the same line, I hit on the way to compose music. I must have worked on it for five years. In a way, it became simplified.”

Also in the background was his interest in contemporary music. Airaksinen had studied and composed music by all sorts of methods: the 12-tone system, dodecaphony and aleatory. He had been particularly influenced by John Cage and his Zen Buddhist ideas of composition, such as the idea that the composer should absent himself from the music-making process by, for example, exploiting chance with the help of the Chinese I Ching prediction system.

“When, inspired by Cage, I set about creating music purely according to mathematics and I Ching, I noticed that neither I Ching nor dodecaphony nor anything else like it really yields any interesting mental images. I therefore set out to develop a different approach. It turned into a sort of microscope or telescope that enabled me to observe things at an abstract level.” 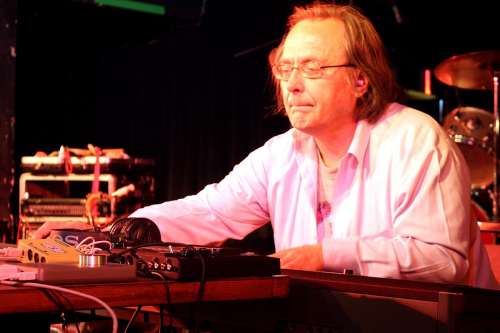 Pekka Airaksinen performance at the 2009 Sonic Circuits festival of experimental music on 27 September 2009.

Airaksinen describes his composition method as not only a mathematical and visual system but also as a musical and spontaneous process. He processes the precalculated and prepared sound modules with intuition in an empty mental space in which total concentration and sensitivity prevail without any conscious ambitions. The important thing is to achieve a tension between the non-material and the material, as he calls the process.

This method of composition has been inspiring Airaksinen for over four decades. It does not result in a uniform style, because the material is also processed musically. In 2002 he said:

“This basic material – if it’s colour, for example, then five rows – can then be developed according to the laws of music. These laws may be serial or tonal ideas, but there are lots of others, too. But the basic idea is not like this; it’s free, it’s tied only to my own world of signification. Rather, the serialism is completely mathematical and mine is not; it’s significance-mathematical.”

The concepts given musical expression hark back to ancient cultures, constellations, notable people, Buddhas, elements or vitamins. In Airaksinen’s early works the theme was revealed in the title, but it has subsequently been concealed. His method has permitted a prolific output that is distinctive and recognisable but covers a wide range of styles. Partly because of this, it is difficult to classify. Experimental electronic music, noise, industrial dance music, ambient, free jazz and contemporary music are just some of his genres.

From sound to image

Airaksinen’s music has proved to be a medium for developing associative thinking and creativity. He has led creative groups in which music serves as a stimulus and found that his own compositions inspire interesting narratives and pictures.

“My music can be used as a medium for non-logical thinking. Logical thinking is difficult to transfer in leaps to different levels, but the association method can be used. It can roam over the whole cognitive domain,” he said in an interview in 2004.

It is interesting to note how the idea of overlapping layers is also borne out in some of Airaksinen’s paintings. His Sonatina mania, for example, painted in the 2000s, represents a flowering meadow invaded by a dynamic space and bursts of energy.

Irma Rinne (formerly Vierimaa) is a long-time friend and pupil of Pekka Airaksinen and a former coordinator at Musicology, Department of Philosophy, History, Culture and Art Studies at the University of Helsinki.