PREVIOUS ARTICLES FOLLOWING ARTICLES
The vinyl industry is overheating, and pressing plants are reporting delays up to 10 months to deliver new product due to ever-growing demand for vinyl. While the labels and artists are struggling to get to grips with the new timeline, there’s a new pressing plant opening up in Helsinki in 2022.

The vinyl industry in 2020’s seems funny. Not ”fun” funny, but ”weird” funny. The format, which was thrown out the window during the tech-heavy 1990’s has been making a comeback now for so long that even the slowest media taking interest in the resurgence of the round black object has had plenty of chances to write their compulsory ”vinyl boom” piece, usually around the annual Record Store Day.

The media story often focuses on things not very relevant for those actually listening to vinyl records on a regular basis, such as ”nostalgia” and ”hi-fi sound”. That is, my personal experience is that only a tiny percentage of anyone dealing around the format have any kind of inclination of calibrating their stereo system on the level that would qualify them as hi-fi enthusiasts.

And the nostalgia bit? Well, many of the vinyl buyers who recently have jumped on board the format grew up during the CD or digital era. Perhaps the digitalization of sound has just advanced enough to also create new space for appreciating a newly found plurality of methods for listening to music.

Annual reports show growth in vinyl consumption numbers but they also fail to tell the whole story. Most of the reports only include numbers of new vinyl sold, whereas the second hand market has always been a big part of vinyl culture. Many of the smaller distributors’ stats also reportedly fail to show on the big scoreboard. What all this means is that the actual clientele for vinyl is probably much larger than the official reports show.

Speaking of new releases, the world of vinyl manufacturing is a complicated one. Record labels and artists are routinely experiencing manufacturing times of 7 to 10 months from the finished album master and graphic design to the actual product, which sometimes takes over a year to arrive. Naturally, this is extremely difficult for labels who often don’t have extensive funds to finance product that will generate revenue more than 12 months after their initial investment.

There have been unofficial estimates that the capacity currently needed for vinyl manufacturing would be about three times what is available, and many pressing plants have stopped accepting new projects altogether. Several delays in the supply chain of materials and machine parts have further deepened the situation during the pandemic. Simply put, if you don’t know where to start, it is a difficult time to press up a vinyl record and to deliver it onto the marketplace. 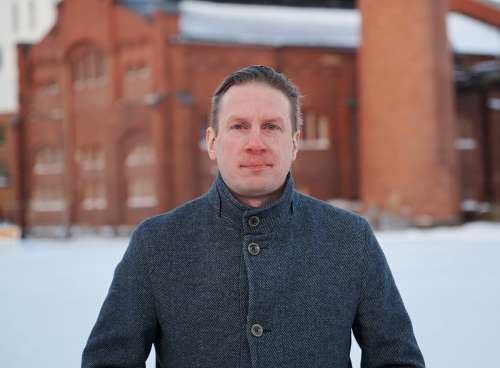 Puristamo gearing up for a 2022 opening

In Helsinki, there’s a glimmer of new hope in sight. At Konepaja, the city’s latest would-be cultural hub, there’s a new pressing plant being prepared for a 2022 launch of operations. Lupu Pitkänen, the man behind the project, is cautious about rising hype with set launch dates or any other tangible deadlines just yet.

”It’s not an industry where things would happen overnight”, he says. ”The process of setting up the machinery and even getting the permits to begin with is a long one. Our building permit for the site officially began in early December and that’s only the first step in building the plant. A long preparation period follows, including a pre-production phase where the process is tested and developed.”

Pitkänen says there are hopes that the plant, named Helsingin Levypuristamo (Finnish for the ”Helsinki Record Pressing Plant”, and referred to also as simply ”Puristamo”), could start operations proper some time during the fall of 2022. But when it comes to the timetable, things are still very much subject to change.

A recording artist himself, Pitkänen is well aware of the current challenges of the vinyl industry. His is not a get-rich-quick scheme, quite the contrary.

”We want especially to be able to help local labels and artists to have a good option of pressing vinyl close by”, Pitkänen tells. ”There are no illusions about the size of the industry here and we’re not Finland exclusive by any means. Still, it would be nice that Helsinki labels would not have to ship a lot of records from one country to another already during the manufacturing process.”

Konepaja is close to the Helsinki scene. The Helsinki headquarters of Svart Records, one of Finland’s foremost indie labels, is located just across the yard from the Puristamo site. Svart is most likely the country’s single biggest vinyl manufacturer. The nearby Vallila and Kallio districts are home to many an independent label, artist and record shop. There is something very poetic about the new pressing plant’s location.

"When it comes to the actual use of PVC and packaging materials, you simply cannot get around some environmental impact of making the physical product, but by streamlining the process there are still things to be done to make everything as green as possible."

”In a way it’s also fitting that there’s an actual industry entity moving into the old factory area”, Pitkänen ponders, referring to the equivalent area’s typical use including bars, restaurants, offices and co-working spaces. ”It is also important to understand that good collaborators are essential in manufacturing vinyl”, Pitkänen explains. ”Our idea is to work in co-operation with local print shops and other actors needed in making the final product.”

One essential part of the process is cutting lacquer, in other words, making the physical vinyl master. This is not done at the actual pressing plant but by a separate entity, that transfers the audio onto the lacquer plate that is usually the music’s first incarnation in a physical format during the manufacturing process. In Helsinki, Timmion Cutting provides several vinyl makers with these plates, which are then sent to the client’s pressing plant of choice for the actual duplication of the finished mass product.

Early on in the Puristamo story, Pitkänen has also referred to something that is surprisingly not at the center of making such physical objects – at least not yet: ecological values.

”Well, I want to be a bit careful with that in order to keep the information honest and easy to understand”, he says. ”For instance, some pressing plants are bordering on ’green washing’ when they explain what they do on the eco level. For us, the main thing is to ensure that the energy used for pressing records is as green as possible and that is something we can do here pretty well. When it comes to the actual use of PVC and packaging materials, you simply cannot get around some environmental impact of making the physical product, but by streamlining the process there are still things to be done to make everything as green as possible. The vinyl industry still has a long way to go there.”

From my personal perspective as a record label manager, record shop owner, DJ, and just overall vinyl aficionado, the prospect of having a reliable vinyl manufacturing partner just around the corner seems nothing short of a dream come true. While the actual turnover time, quality and other aspects of the trade are of course hard to predict so early on in the planning of the actual plant, the prospect of Puristamo opening for business soon is already generating a positive buzz in the local scene, where good news have been few and far between during the pandemic era.

Lupu Pitkänen announced his plans quite early on (”American style”, as he jokes) but keeps expectaions firmly in check when talking about the prospective future.

”The machinery is ordered but everything from installing them to hiring staff and figuring out the workflow is still far ahead. I don’t take the success of such an endeavor as this for granted, even if everybody is talking about the lack of good pressing plants. There needs to be a very realistic view of how to run things in order to make it work well, in terms of both quality and service”, he says.

”One things that was very important to me was to know that I would not be in direct competition with anyone here locally. The goal is to add something new, to provide a new service.”