The We Jazz festival - or, in Artistic Director Matti Nives’ words, utopia and installation - has been an integral part of creating what German news magazine Der Spiegel called “The Jazz Miracle of Helsinki”. We Jazz itself is a miracle, says Berlin based music journalist Andreas Müller. Here are his thoughts about a Golden Generation and a Golden Age for an innovative music called Jazz.

Two musicians, a tenor saxophone player and a drummer, squeezed into a boxlike room inside a huge storage facility on Mannerheimintie, Helsinki. They are observed by an audience of two dozen - three of them are sitting so close to the musicians that they literally can smell the breath coming out of the horn and act as some kind of muting device for the drum set. Is this a concert? A happening? Or rather a Social Sculpture according to Joseph Beuys who believed in art’s potential to transform society, claiming that everyone is an artist.

Well, the artists were first of all Swedish-born and Berlin-based saxophonist Otis Sandsjö and Finnish drummer Joonas Leppänen who after a long stint in Germany’s capital have returned home. Eight years ago, as students, they shared a flat in Berlin and played for their teacher, Joey Baron, as a duo. He encouraged them urgently to follow this path but they never played as a duo again until this moment in that storage room.

As this is a “secret gig” the audience doesn’t know who is going to play beforehand. But they take the risk. Which shows some bravery and also confidence in the work We Jazz has done in the past, when every year acts and artists were taken out of their environment and the regulations of a traditional festival: take a room or two, book some big names to sell tickets and sneak in some interesting newcomers. Convenient. And boring. Sandsjö and Leppänen are taking a risk as well. Their set is - first of all - free improvised music. But they also have to deal with the fact that they need to find a certain dynamic for not to blow eardrums of the listeners that are sitting close-by. Does that make the listeners artists as well? They become a part of the sound design at least.

Did these 40 minutes transform society? Of course. Because it made people think. I for one found this situation a profound example of the many wrongs in our Western societies that force some of us to buy storage space for goods we can’t keep in our more and more expensive apartments. Seeing two creative musicians work in that tiny box is an impressive metaphor for what those artists are going through. Plus this “installation” added some interesting experience for some: one critic from the US who has seen it all, was almost enthusiastic when he later said: “In my whole life I never sat that close to a drummer”. 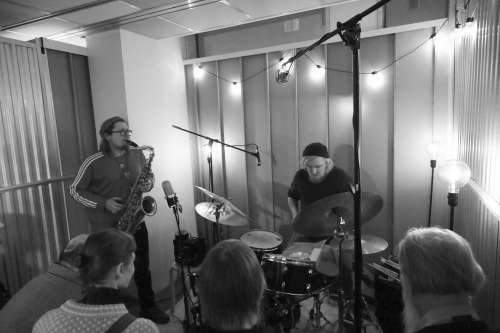 The music we still call "jazz" is older than any other popular style in this world. But still, in its best moments, it gives us these precious moments of surprise. When musicians create something unheard, something new, right there in front of us. At We Jazz the choice of locations adds something to that momentum. On that night you may experience a stark contrast when you leave the storage performance and enter posh club G Livelab, which is, like all the other We Jazz shows, sold out.

Neatly seated, the audience awaits the beloved Ilmiliekki Quartet which delivers a very solid set that is transmitted in breathtaking quality through a high-end sound system. Almost perfect, but almost too perfect for this writer’s taste, who admired much more the feverish approach of tackling the art of the piano trio by Enemy. Two Britons, pianist Kit Downes and drummer James Maddren, play mostly music written by Berlin based bass player Frans Petter Eldh of Amok Amor fame. Next to Sandsjö and Leppänen, Eldh is the busiest artist of the week, performing also with Koma Saxo (a brand new group with drummer Christian Lillinger, and sax-players Sandsjö, Jonas Kulhammar and Mikko Innanen) and Y-Otis.

Eldh is part of that Golden Generation that has evolved over the past ten years in Berlin. So many brilliant musicians moved to the city - from other German places or abroad. They created a sound recognizable in a split second. A nervous vibration, an almost hysterical shivering in the music that represents a fast growing and changing town. Even ballads run with a strange pace that lays somewhere deep in the music.

With Y-Otis this is magnified. Again Otis Sandsjö, Eldh on electric bass, Dan Nicholls on synthesizer and Tilo Weber on drums play tracks that are partly based on sketches by Sandsjö which Eldh recorded with the band, then edited and finally finished with a good amount of post-production. Y-Otis (don’t miss their album on We Jazz records!) played as part of a top bill at Ääniwalli, (ususally an electronic dance music club), next to Anteloper, Logan Richardson blues PEOPLE, Ernie Hawks & The Soul Investigators, Perussastamala and Richard Andersson NOR.

That night represented We Jazz in a nutshell and proved that we live in a Golden Age for this kind of music. In NOR, Oskar Gudjonsson‘s saxophone sang sweet songs of family and friendship - next to bassist Richard Andersson and drummer Matthias Hemstock. Both never played one note too many. A classic set. Mikael Saastamoinen banged white noise out of his heavily processed electric bass, creating also precious silence.

Ernie Hawks & The Soul Investigators celebrated what is Finnish Soul and inspired both mind and body. Saxophone player Logan Richardson’s (US) research into the Blues sounded and worked on stage way better than on the album he had released recently. And finally Y-Otis tore down the house. Their music is delicate and very complex. But after having played some gigs since the release of their album this maelstrom is played with greatest authority. And it is a lot of fun, too. A tough act to follow but Anteloper from Chicago (trumpet player Jaimie Branch who also worked electronics and Jason Nazary on drums) let out their beat driven beast of music. That night was a triumph. 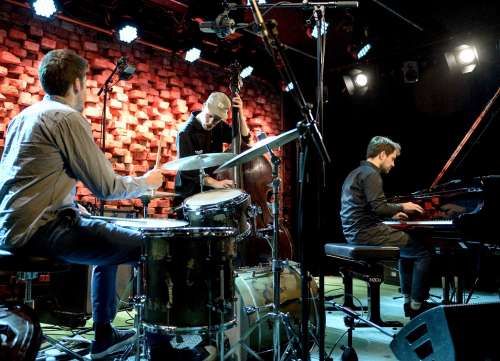 Curating a festival does not only asks for musical feeling and knowledge. You need luck as well. What looks great on paper might turn out to be a disappointment. Who would have thought a show in a storage facility could be so inspiring? Who could have expected that on stage Logan Richardson would get rid of those awful 80s sounds that spoiled his last album and played a great gig? Going to Suvilahti sounded like a great idea. Dalindèo’s Komeda project was fine, Aki Rissanen was fine too.

Bringing the sub festival Mopocalypse, curated by the band MOPO, to the same venue didn’t go so well. Separated by one door only, loud DJ Music blended into the delicate sets from Kim Myhr’s guitar and drums driven You/Me project and Moskus free form piano, bass and drums excursions (both acts from Norway). Too bad that parts of the audience were infected by what a colleague from the Netherlands called “the Dutch disease” - that is, there was a lot of loud chatter by those who were obviously waiting for the great Timo Lassy Band.

Even the most dedicated person would be quite challenged trying to cover the whole week of We Jazz. But that is not the idea anyway, I suppose. If you dared to attend one of these secret gigs or listen to a group (as in the case of Koma Saxo) that venture out into uncharted territory by playing together for a few hours before the show, you might want more. It’s a miracle that this festival (or Utopia or Installation or all of this together) did happen in the first place. It’s a miracle that it is now going into its seventh year. 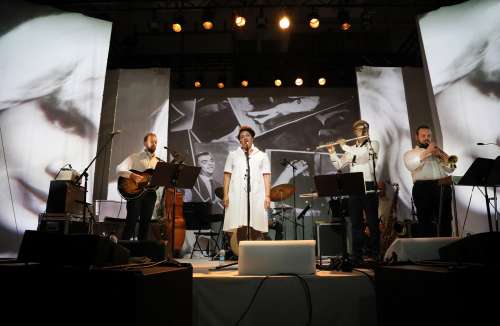