The cultural cold war between the superpowers that began after the Second World War played a major role in shaping the international arts and culture scene as we know it today. This series of articles discusses the impacts of cultural diplomacy, particularly that of the USA, on Finnish music from the days of the Cold War to the present. The second part focuses on the complex and diverse network of cultural diplomacy efforts aimed at Finland by the USA in the 1950s.

Dodecaphony did not really reach Finland until the 1950s, but soon thereafter, towards the end of the decade, young composers were already taking an interest in other trends in contemporary music, particularly serialism, concrete music and electronic music. Inspiration was sought particularly in the music and sound experiments of composers such as Karlheinz Stockhausen, Olivier Messiaen, Pierre Boulez, Luigi Nono and Pierre Schaeffer.

The breakthrough of modernism reflected the rapidly broadening internationalisation of musical life in Finland in the post-war era. Composers were now frequently visiting international contemporary music festivals such as the Nordic Music Days and the festivals of the International Society of Contemporary Music and Donaueschingen, and also the summer courses in Darmstadt. They reported on their trips in printed media and gave talks for instance at seminars held by the Society of Finnish Composers.

Most of these trips were to cities that were hubs of Western art music in Europe in the years after the Second World War. West Germany emerged as a hotbed of contemporary music and a meeting ground for European and American composers. It was also a favourite destination for Finnish composers.

Cultural efforts by the state

As discussed in the first article in the present series, during the Cold War the USA invested in cultural life in Europe by funding and supporting concerts, festivals, tours and cultural exchange programmes. This had an impact on the Finnish music scene too.

One of the US bodies engaged in cultural promotion during the Cold War was the United States Information Service (USIS), one of whose many outposts was in Finland. USIS maintained a library, organised concerts and tours, and provided facilities and equipment for cultural events. One of the services offered by USIS was the loan of high-quality sound systems, which was made use of for instance by the Nykymusiikki-Nutidsmusik contemporary music society in organising concerts of electronic music.

USIS also promoted the purposes of the US cultural programme at its events. At the monthly meeting of Nykymusiikki-Nutidsmusik in May 1957, Martti Vuorenjuuri (1932–2008) gave a talk on avant-garde music and played music by Bruno Maderna (1920–1973) and Luciano Berio (1925–2003), composed at the electronic music studio in Milan. The talk concluded with a propaganda film on the life and career of US singer Marian Anderson.

The numerous cultural exchange grants provided by several US bodies in the 1950s helped advance the internationalisation of Finnish culture. These grants were for study trips and further education that always included a course of orientation in American culture. The purpose of this was to improve the status and reputation of American culture abroad.

The ASLA programme (from the Finnish acronym for ‘Grants from the American loan to Finland’), which began in 1949, became the cornerstone of cultural exchange between the two countries. When USIS released its first bulletin on ASLA grants in 1950, the only genres of the arts included in its roster of disciplines were composing and orchestra conducting. The participants of the first ASLA exchange programme included composer-conductors Nils-Erik Fougstedt (1910–1961) and Nils-Erik Ringbom (1907–1988), music critic Olavi Kauko (1926–) and violinist Leena Siukonen (1924–1994). The US State Department also invited Finnish musicians on funded study trips to the USA outside the ASLA programme, e.g. composer-conductor Martti Similä (1898–1958) and composer-organist Taneli Kuusisto (1905–1988).

These extensive cultural exchange activities were also contributed to by private foundations. The largest provider of grants for trips by musicians was the Ford Foundation, whose grants paid for ten prominent and influential Finnish musicians to undertake an orientation course in American culture in 1958–1959. These included soprano and voice teacher Liisa Linko-Malmio (1917–2017); composer-conductor Paavo Berglund (1929–2012); the head of the music department at the Finnish Broadcasting Company, Kai Maasalo (1922–2000); and Professor Erik Tawaststjerna (1916–1993). The Ford Foundation was, like the Rockefeller Foundation, one of the CIA’s key channels for funding cultural propaganda.

Composer Einojuhani Rautavaara (1928–2016) received a private grant from the Koussevitzky Foundation, enabling him to study in the USA in 1955. During his stay, he attended the Tanglewood summer academy, whose leadership was closely connected to the US cultural diplomacy elite of the Cold War era.

Composer Aaron Copland, who was one of Rautavaara’s teachers at Tanglewood, was one of the USA’s most important musical diplomats at the time. Copland’s visit to Finland in 1958 was jointly organised by the Society of Finnish Composers and the Finnish American Society, the latter being the most important body promoting American culture in Finland during the Cold War. The Society arranged for a number of other prominent American musicians to visit Finland, such as violinist Yehudi Menuhin, conductor Herman Neuman and singer Ellabelle Davis.

The US cultural programme further involved sending the best US orchestras out into the world to promote American cultural achievements. The first Sibelius Week (the precursor of today’s Helsinki Festival) organised in Helsinki in 1951 featured the Philadelphia Orchestra under Eugene Ormandy. In 1956, the US State Department funded the Boston Symphony Orchestra’s trip to Finland, and in 1959 the New York Philharmonic gave concerts in Helsinki and Turku. 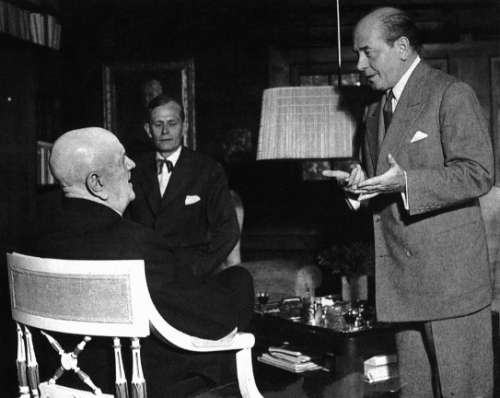 Eugene Ormandy (right) visiting Jean Sibelius in Ainola during the Sibelius Week in 1951. Nils-Eric Ringbom in the middle.

The many variations of cultural diplomacy

The present article can only feature a handful of examples picked from the complex and diverse network of cultural diplomacy efforts aimed at Finland by the USA in the 1950s. These efforts included not only cultural exchange trips but also projects such as joint recordings and radio programmes and tours by Finnish performers in the USA.

Although Finnish musicians did also visit the Soviet Union and eastern Europe on their trips abroad, the volume of trips to and influences from the West was so overwhelming that in the present author’s estimation we may reasonably conclude that Finnish music was firmly oriented towards the West in the 1950s. This was apparent in the careers of the grant recipients, in press reporting and in broadcast repertoire.

The cultural exchange programmes of the 1950s involved key figures in Finnish music, from university professors to the leadership of the music department at the Finnish Broadcasting Company, from instrument teachers and music journalists to composers and conductors. Although Finnish musicians had previously performed in the USA, and Finnish music had been promoted there, this interaction had principally concerned the music of Sibelius. The cultural programme of the Cold War era broadened the horizons of young Finnish musicians and music experts in particular and provided wider opportunities for pursuing international careers.

However, in considering all this we must always remember that in the context of the Cold War cultural exchange always involved predetermined political goals. From the perspective of the funding providers, promoting Finnish music was by no means the most important of these goals.

Sources for the article include the following:

Emily Ansari: ‘Aaron Copland and the Politics of Cultural Diplomacy’. In Journal for the Society of American Music (2011). 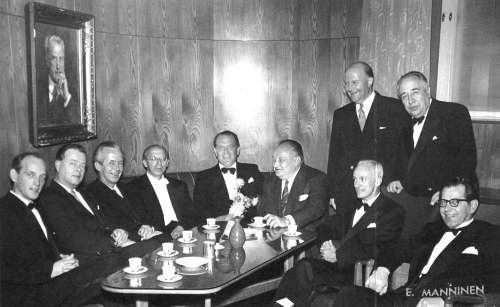 Cultural diplomacy during the Cold War had clearly defined political goals, and it is often difficult to distinguish between diplomacy and propaganda in that era. Cultural diplomacy frequently blended information propaganda objectives with the broader goals of improving understanding between nations.

Cultural exchange was a key tool of cultural diplomacy: US cultural diplomacy practices during the Cold War included both sending US performers and experts abroad to give concerts and talks and inviting prominent foreign cultural personalities to the USA for training or orientation.

In the context of cultural diplomacy, music may be considered one of the subtlest means of influencing attitudes.