Composer Alexandra Zheleznova-Armfelt (1866–1933) was a member of the Finnish community in St Petersburg and created her career outside Finland itself. A review of her life and work adds to our understanding of the cosmopolitan nature of our musical history and also lends a perspective on cultural life in St Petersburg and in the Baltic Sea region in general around the turn of the 20th century.

Alexandra Zheleznova-Armfelt is a composer who has remained unknown in the annals of Finnish music. She came from a well-known aristocratic family and attained a degree of recognition among the intelligentsia in her home city.

Alexandra Armfelt was born into the family of Vladimir (Mauritz) Armfelt in Turku in the 1860s. The details of where and when exactly she was born vary in different sources; the information given in this article comes from the most reliable of those sources, the Finnish Calendar of Nobility. Because of the father’s official duties, the family had a permanent residence in St Petersburg, which is where Alexandra was brought up and educated. She had the opportunity to pursue artistic studies to an advanced level thanks to her high social ranking, even if becoming a professional composer and a performing artist were not recommendable career choices for a young noblewoman.

In the thick of it in St Petersburg

Alexandra Armfelt’s family belonged to the civil service elite: her great-grandfather was the famed Governor-General Gustaf Mauritz Armfelt. Because of her family connections, she soon found her way into the inner circle of the intelligentsia in the cosmopolitan capital of the Russian Empire. Her extensive language skills and broad general education must have helped her secure a place for herself in high society along with her talent as a composer. Family records show that Alexandra Armfelt received a thorough education thanks to which she spoke French, German, Swedish and Russian, and also Finnish and Polish. Her arts pursuits included drawing and poetry in addition to music.

By the early 1890s, Alexandra had reached the epicentre of musical life in St Petersburg, the circle around the group of composers known as The Five, or the ‘Mighty Handful’ (могучая кучка), led by Mili Balakirev. Some sources indicate that she studied composition with Anton Rubinstein and was also acquainted with Nikolai Rimsky-Korsakov. At around this time, she began to publish her compositions – mainly solo songs and character pieces for piano. Later, she dedicated at least one of her works to Balakirev. 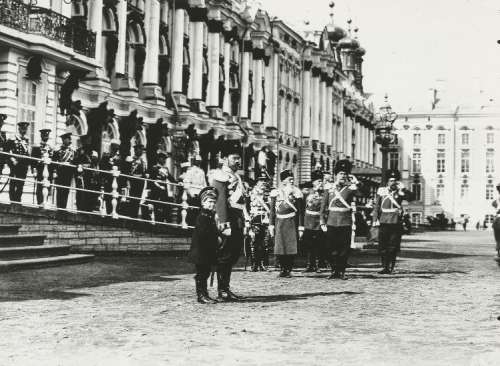 Alexandra Armfelt’s husband Vladimir Feofilaktovich Zheleznov (1863–1920?), on the far right, was a Ural Cossack by birth and passionately interested in the musical tradition of his native region. This photo taken in 1910 shows the Combined Cossack Regiment of the Imperial Guard on parade outside the Winter Palace in St Petersburg, being reviewed by Tsar Nicholas II and Tsarevich Alexei. Source: История России в фотографиях database.

Alexandra Armfelt married Vladimir Zheleznov, a Russian officer, in the mid-1890s. He was also interested in the arts and sciences, with a particular penchant for Russian folk music. Accordingly, the newlyweds embarked on a project to collect Cossack folk songs from the Ural region, and Alexandra’s publisher, Zimmermann, published an edited collection of their findings in the early years of the 20th century: Пѣсни уральскихъ казаковъ [Songs of the Ural Cossacks]. Marriage and the children that eventually arrived seem not to have had a dampening impact on Alexandra’s creativity, as she continued to write music at a steady pace.

The lives of everyone in St Petersburg, including the Zheleznov family, were turned upside down by the First World War, a string of revolutions and the Russian Civil War. It is believed that Alexandra Armfelt lost her husband and all her four sons in these conflicts. As the noble-born wife of an officer siding with the Whites, she was not exactly a favourite with the new Bolshevik government. Nevertheless, like many of her female colleagues, she was able to support herself and her daughter by working as a cinema pianist and a piano teacher.

Despite the troubled political situation and her low level of income, Alexandra Armfelt never emigrated. She remained in St Petersburg, subsequently Leningrad, where she died in 1933. 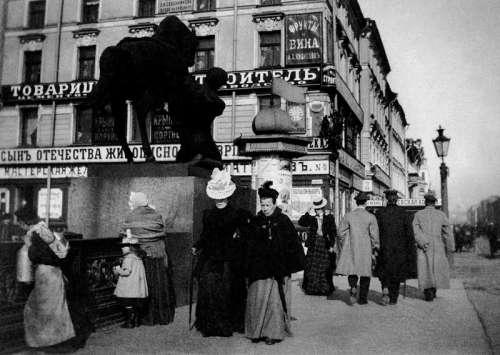 Steeped in the tradition of Russian romances

As a composer, Armfelt is principally known as a proponent of the tradition of Russian romances. Her surviving works include solo songs, character pieces, chamber music and melodramas. Her grandson reports that she was also particularly interested in music for children and pedagogical music, which her output also includes.

Armfelt’s late Romantic style shows the influence of her contemporaries and, in terms of keyboard style, also of Chopin. Her solo songs are settings of her own poems and also poems by Grand Duke Konstantin Konstantinovich Romanov and others.

Unlike many other woman composers neglected by musical scholarship, Alexandra Armfelt’s music has been performed and systematically collected since the 1960s. Her daughter Xenia Osechkina and grandson Vsevolod Rukopolev have been particularly active in championing her work. They have published her manuscripts – those that were not lost during the siege of Leningrad, that is. In 2015, a Helsinki audience was treated to her music in a recital by soprano Aleksandra Huhtala-Labzounov and pianist Tatiana Vainstein at the Music Centre.

Part of the history of Finns in St Petersburg

Like Laura Netzel in Stockholm, Alexandra Zheleznova-Armfelt is considerably better known in her home city than in Finland. A cosmopolitan Countess born into the Finnish community in St Petersburg and interested in collecting Russian folk songs was never a good fit for the Finnish nationalist canon of great composers. Her profile would no doubt be very different if she had followed the example of another major Finnish influencer in St Petersburg, Elisabeth Järnefelt (1839–1929). Although born into a Baltic-German family (Clodt von Jürgensburg), Elisabeth adopted a Finnish nationalist (Fennoman) philosophy and identity. In Armfelt’s case, by contrast, the emergence of the Soviet state and the consequent closing of borders relegated her to the margins in the history of music.

Listen to Alexandra Armfelt’s Mazurka for piano and the romance И море, и солнце, и волны [And the sea, and the sun, and the waves]. The performers are Aleksandra Huhtala-Labzounov (voice) and Tatiana Vainstein (piano).

Translation: Jaakko Mäntyjärvi
Featured photo: A noblewoman around the turn of the 20th century. She is probably Countess Alexandra Zheleznova-Armfelt, although her identity has not been confirmed. Source: Wikipedia.ru.