Ida Moberg (1859–1947) wished to command ensembles that produced a large sound while also touching human emotions: Most of her output is for orchestra or choir or both. The topics of her works largely has to do with individual’s spiritual metamorphosis.

Moberg was influenced by theosophy, a philosophy according to which art is a portal to a transcendental spiritual realm. She was active in theosophical and anthroposophical circles in Finland and abroad throughout her adult life. Her identity as a Swedish-speaking Finn, folk education and women’s rights were also important to her. The symbolism of freedom is a key element in her output.

From singer to composer

Moberg began her musical career as a singer and music teacher in the 1880s. This was partly a direct consequence of her attending the Swedish-language girls’ school in Helsinki [Svenska Fruntimmerskola] from 1870 to 1877. This school was an alternative academy for women’s education, and its artistic figurehead was voice teacher, choir conductor and composer Anna Blomqvist (1840–1925), who also taught German. Blomqvist became a lifelong mentor to Moberg in a network that also included virtuoso pianist Alie Lindberg, music critic Anna Ingman and women’s rights activist Maikki Friberg.

Moberg also studied with singer Maria Collan and pianist Alie Lindberg in her youth. From 1879 to 1883, she studied voice with Elizabeth Zwanziger and Friederike Grün-Sadler at the St Petersburg Conservatory. However, she eventually developed physical problems with her singing, and in her thirties she dedicated her career to composition and to conducting choirs and orchestras.

Moberg studied composition at the orchestra school of the Helsinki Philharmonic Society (now the Helsinki Philharmonic Orchestra), where her teachers were Jean Sibelius (1893–1895) and Ilmari Krohn (1900–1901). As late as in her forties, she sought further instruction in composition, studying with Felix Draeseke at the Royal Conservatory in Dresden from 1902 to 1905. At that time, she also attended lectures on anthroposophy given by Rudolf Steiner. 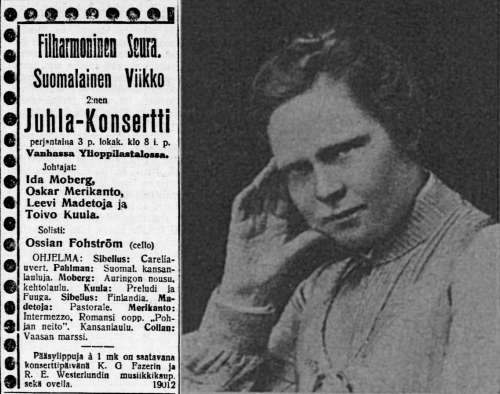 Left: In the 1910s, composer Ida Moberg was self-evidently part of the canon of living Finnish music. On 3 Oct 1913, she conducted a performance of her works Soluppgång for orchestra and Kehtolaulu for strings with the Helsinki Philharmonic Society orchestra at their festive concert for Finnish Week. Concert advertisement in the Helsingin Sanomat newspaper, 3 Oct 1913.
Right: Photo of Ida Moberg in the Naisten ääni [Women’s voice] periodical, 15 Dec 1922.

Moberg studied music pedagogy in Berlin and Dresden from 1910 to 1912. Her studies at the institute founded by composer and music educator Émile Jaques-Dalcroze at Hellerau (Dresden) proved particularly significant. Indeed, Moberg meant to settle in Dresden permanently, but after the outbreak of the First World War she was obliged to return to Finland instead.

Moberg brought Dalcroze’s body movement-based solfège to Finland, teaching the subject at the Helsinki Music Institute (now the Sibelius Academy) from 1914 to 1916. Understanding music through bodily movement became an integral part of her musical thinking. She created an extensive career as music teacher at the Swedish-language primary school teacher seminary in Helsinki. Moberg also gave private lessons in music theory, orchestration, composition, improvisation and the piano.

Stylistically, Moberg’s music draws on Symbolism, Impressionism and Expressionism. Her textures are harmonically static but rhythmically mobile, with a decisive pulse and recurring motto-like subjects. There is a strong sense of kinaesthesia and dance, and she was partial to word and tone painting. Tone colour and a sense of ‘now’ are important elements in her music. Images of light, mystery, eternity and spirituality are typical. Many of her works end in an ecstatic sweep or an ethereal evaporation.

The concept of the spiritual struggle of a human individual is apparent in the titles and subjects of Moberg’s works as well as in their musical idiom, imagery and structure.

The two-movement orchestra work Livets sång [Song of life] (1909), for instance, is characterised by a stepwise motto motif typical of Moberg, beginning with a dotted rhythm. It evokes an image of walking, the path of life.

In the first movement, the motto appears as an ascending, bright texture on flutes and strings, coloured by lucid woodwind chords. In the second movement, De dödas vandring [Wandering of the dead], the motif descends instead in a bleak landscape painted by timpani, bassoon and double bass but eventually softens into a chorale-like texture with harp.

Moberg described many of her orchestral works – even her Violin Concerto – as tone poems (tondikt), emphasising their narrative nature. Soluppgång [Sunrise] (1909), for instance, consists of four movements: I Soluppgång [Sunrise], II Preludi or Verksamhet [Activity], III Afton [Evening] and IV Stillhet [Stillness]. In Symbolist fashion, Moberg’s evocations of nature serve as metaphors for the spiritual processes of the human mind and for communing with the universe.

Many of Moberg’s known orchestral works have been lost, such as the Symphony in D minor, Meditaatio, Mikaelintunnelma [Michaelmas mood] and Kalevala-fantasia. Some works survive in various versions or only as sketches. However, quite a few do exist in fully performable form.

Works for choir and orchestra

Moberg wrote her Symphony in Dresden and conducted it herself at her composition concert in the Great Hall of the University of Helsinki on 28 February 1906. The programme also included the Overture in A minor, the orchestral work Landtlig dans [Country dance] and Vaknen! [Awake!] for baritone, male choir and orchestra. Moberg conducted concerts in Helsinki and Viipuri in the 1900s and 1910s, and Moberg’s works were also performed by the Helsinki Philharmonic Society under Robert Kajanus (e.g. Soluppgång in 1909 and the Andante for cello and orchestra in 1914). The Akademiska Sångföreningen and Muntra Musikanter male choirs performed Moberg’s choral works, as did the Theosophical Choir, which Moberg herself conducted.

There are many works in Moberg’s output that could be described as cantatas, for instance Livskamp [Life’s struggle] for male choir and orchestra to a text by Jacob Tegengren and Före striden [Before the battle] to a text by Bertel Gripenberg. Tyrannens natt [Night of the tyrant], a setting of a poem by J.J. Wecksell, for tenor or soprano soloist, male choir and orchestra, won the composition competition held by the Muntra Musikanter male choir in 1909. Nearly all of the texts set by Moberg are by Finland-Swedish authors.

Munificentia (1936) for mixed choir and strings is based on the mystic penitential psalms of Niko Runeberg. Its three movements are I Munificentia [Munificence], II Amor mortis [Love of death] and III Amor proximi [Neighbourly love]. Another Nino Runeberg setting may be found in Ex Deo nascitur for mixed choir, strings and organ, whose title refers to an old Rosicrucian mantra.

Many of Moberg’s a cappella choral works also address the topic of spiritual struggle, as with the mixed choir works Skymning [Twilight], Mänska vakna! [Awake, O human!] and Vad skall du älska? [What shalt thou love?]. 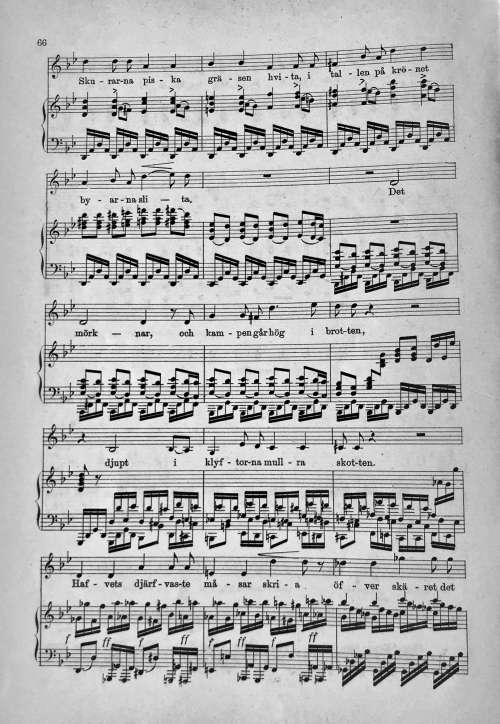 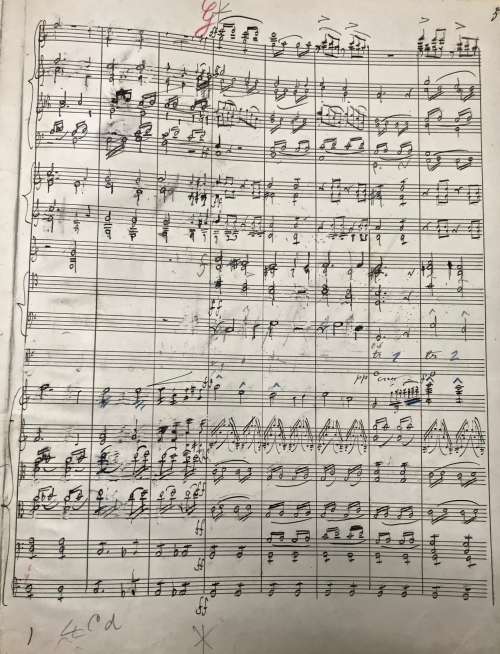 Light from the East

In 1910, Moberg began to write an opera based on the life of Gautama Buddha, titled Asiens ljus [The Light of Asia]. She continued to work on it until the end of her life. It was never performed in its entirety, though extracts were performed as separate works – Balettikohtaus [Ballet scene] and Kehtolaulu [Lullaby] (a.k.a. the fourth movement of the orchestral suite Soluppgång, Hiljaisuus [Stillness]).

The libretto is based on The Light of Asia: The Great Renunciation (1879) by English philosopher Edwin Arnold, a poetic biography of Siddhartha Gautama, which in turn is based on the Sanskrit text The Lalitavistara Sūtra. Arnold’s book represented one of the earliest efforts in popularising the life of Buddha in the West. Moberg adapted her libretto from a Swedish translation of the book with her friend, theosophist Agnes Gluud.

The opera is about the awakening of Prince Siddhartha to the suffering of the world and his decision to renounce his privileged life. Colourful tone painting and light symbolism characterise the work. At times, the singers and dancers are called upon to move according to the eurhythmic patterns devised by Steiner. The work culminates in a cosmic nirvana.

Recently, the Savonia Musical Society in Finland has taken it upon itself to reconstruct and perform the opera. Its subject seems quite timely in today’s world: it focuses on spiritual development instead of technological and economic advancement, replacing selfishness and the exploitation of the weak with compassion and a sense of community.

Ida Moberg continued to search for the meaning of life through composing music up until the last days of her life.

Her vision of music as a conduit to the mystery of existence links her to the tradition of esoteric aesthetics, which is an important strand in Finnish classical music (espoused for instance by Oskar Merikanto, Erkki Melartin, Väinö Raitio, Helvi Leiviskä, Heidi Sundblad-Halme, Erik Bergman, Einojuhani Rautavaara and Kaija Saariaho). Moberg was one of the earliest and remains one of the most important proponents of this approach; and yet virtually none of her works have been recorded to date apart from a few choral pieces.

Along with the Savonia Musical Society, violinist Mirka Malmi has been championing Moberg’s music in recent years. She will perform Moberg’s Violin Concerto, or Tondikt för violin och orkester [Tone poem for violin and orchestra] at concerts of the Savonia Musical Society in Kuopio and Varkaus on 28 and 29 March 2020, respectively. She is also planning a performance with the Wegelius Chamber Strings in Helsinki in May 2020.

Most of Moberg’s orchestral works can be found in the manuscript collection at the Sibelius Academy library at the Music Centre in Helsinki, only a few metres from the hall where the Helsinki Philharmonic and the Finnish Radio Symphony Orchestra perform today. It will be exciting to see when this music makes its way onto that stage. We have already had a teaser: the world premiere of Om fotspår och ljus [Of footprints and light] by Lotta Wennäkoski contained a quote from Moberg’s opera Asiens ljus. 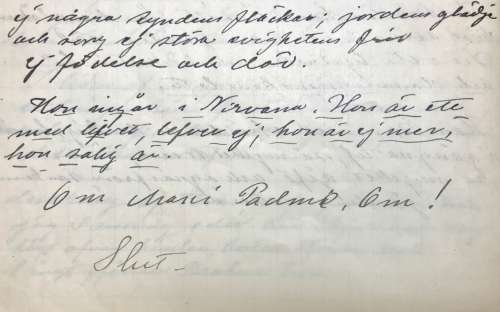 One of the two preserved libretto booklets for Ida Moberg’s opera Asiens ljus. The work concludes with the enlightenment of Siddhartha Gautama and the Buddhist mantra ‘Om mani padme hum!’ (University of the Arts Helsinki, Sibelius Academy Library, manuscript collection)

Nainen ja viulu [Women and Violin] concert series is organised by violinist Mirka Malmi. Its May 2020 concert is intended to include Ida Moberg’s Violin Concerto with the Wegelius Chamber Strings.

Works by Ida Moberg, digitised by the Savonia Musical Society.

Video of the world premiere of the orchestral work Om fotspår och ljus [Of footprints and light] by Lotta Wennäkoski, given by the Helsinki Philharmonic Orchestra on 12 Sep 2019. The work refers to Ida Moberg and quotes an extract from her opera Asiens ljus.