While music as a profession or hobby is not the worst imaginable environmental polluter, no-one in our time and age can afford to think they are above environmental responsibility. Musicians experience eco-anxiety especially for the amount of travel associated with their profession. What can an individual musician or music consumer do to help the environment, and is it possible to achieve change through music?

Many music professionals and organisations are gradually awakening to their responsibilities for global environmental action. While it seems that individual music professionals and amateurs have the motivation to pitch in, it is challenging to find the right methods and avenues in order to achieve real change. The following article, compiled with help from environmental experts and musicians, gives practical suggestions on what an individual musician or music consumer can do.

In his manifesto for activist music research [published in Finnish and Swedish], ecomusicologist Juha Torvinen writes that music itself can help in the drive to solve ecological problems “in a special, even crucial way”. Singing and playing will not save our ecosystem, but musicians and their art can influence the way we interact with the world around us.

Olli Tiainen, climate and energy campaigner for Greenpeace, also sees the music industry as an important opinion shaper: “Music makers have a voice. They have influence and an opportunity to reach the kind of audiences which will not necessarily be reached by environmental organisations. Music can also send strong emotional messages.”

Audiences can be reached both by using public authorities and rhetoric, and directly through art. Even small actions matter, but the largest responsibility falls on those who enjoy the greatest public authority. One recent example is the rap group Gasellit who lent their support for a campaign titled Korvaamaton [Irreplaceable] during the recent Finnish parliamentary election. The campaign was run by various environmental and development organisations in order to identify the climate crisis as the number one issue in the election. EDM artist Darude, Finland’s representative in this year’s Eurovision Song Contest, played his part through his contest piece Look Away, urging people to take action in order to solve our big global problems. Darude is also involved in a UNICEF campaign which illustrates the effects of climate change on children and young people around the world.

Although the American online magazine Pitchfork recently remarked that songs on the current pop charts are anything but upbeat and fun, we still have not seen many songs about climate change hitting the charts.

Tiainen from Greenpeace points out that in addition to using their public authority, music makers can directly influence gig presenters and festivals, for example: “Musicians, too, have to be active in sending a message to their presenters about the importance of environmental responsibility through actions such as using renewable energy or offering more plant-based catering options.”

Bands in the beginning of their career hardly dare to bite the hand that feeds them, which means that all eyes will be on the most influential stars to lead the action. 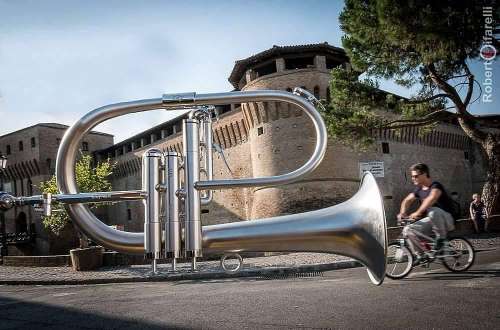 "Jazz Bike Tour - the sound and the territory”, a project developed by Italian trumpet player Luca Aquino in the framework of "Take the Green Train" consisted of a tour of over 4000 km entirely by bike and 40 shows from Benevento in Southern Italy to Oslo in Norway in 2017.

Folk music fiddler and singer Suvi Oskala says she has been suffering from eco-anxiety for years. She is currently trying to alleviate her distress through her work with a multi-art group, creating a staged work which takes a stand against ocean plastic pollution. In addition, she also tries to commit to small environmental actions.

“Whether it is commuting by public transport or bicycle, looking after my work equipment to maximise its life span, or adding a carbon offset on top of my international fee quotes – every small action is a step in the right direction. A universal change requires actions from other industries as well, but a shift in our attitude can just as well slowly begin from our lefty-green bubble of the arts”, she reflects.

Many environmentally conscious musicians identify travel as their most painful eco-issue, a fact underlined by Finland’s remote geographical location. “Even when touring to Central Europe, it is more challenging for a Finnish musician to avoid flying compared to their Swedish colleagues, as crossing the Baltic Sea will inevitably create emissions in one way or another. This leaves a choice between the Baltic or the atmosphere. Faced with this impossible dilemma, flying will often win due to scheduling realities”, Oskala says.

A few years ago, jazz musician and bassist Eero Tikkanen did several tours from Finland to Central Europe and back by land and sea only. “I felt it was important for me to find out whether it was possible, and it certainly turned out to be. But it does require a lot more time and a bit more money as well. I also had to be more proactive in my trip planning as it wasn’t as simple as buying a one-click airfare.”

Finding the overall experience positive, Tikkanen also attracted a lot of attention and amazement, especially in the eyes of his Central European presenters. Since then, he has had to make compromises in terms of flying, but he remains conscious of environmental issues. He tends to avoid isolated gigs and instead tries to bundle together several performances into practical tours, something that has proved challenging for someone performing marginal music.

”This is something I have reflected and discussed a lot with my colleagues as well. Everyone knows it’s not ecologically sustainable to fly, but is the solution to stop performing altogether? Is there another way of compensating? Could the music have a valuable message, for instance, which will then compensate for a flight?”

In 2014, Tikkanen’s ensemble Mopo released an album titled Beibe which included a track “Luonto kutsuu” [Nature is calling], inspired by the need to respond to and process the problematic situation at the Talvivaara mine, one of Finland’s largest nickel mines. In 2012, a million cubic metres of acidic water containing metals and sulfate leaked from the mine’s faulty gypsum pond into the surrounding environment.

Having gigs closer to home makes it easier to choose a green transport option. Bicycle-riding musicians can be found in the ranks of the Lahti Symphony Orchestra, for example. Oskala’s colleague, violinist Emilia Lajunen, completed her first ever carbon-free folk music tour in 2015 by cycling through Finland, with her cycling adventures set to continue this summer with Oskala.

Few music makers have the power or status to be able to achieve big changes on their own. Individual musicians and small organisations may have a better chance of getting their message through by combining forces, whether through an innovative initiative or a consumer boycott.

In 2014, Europe Jazz Network partnered with Julie’s Bicycle, a pioneering charity working on environmental sustainability in the arts. Their joint initiative “Take the Green Train” has mapped the environmental challenges in the arts industry and endeavoured to find solutions through seminars and conferences, among other activities. In conjunction with the initiative, saxophonist Evan Parker undertook a pilot green tour in 2016, choosing the most environmentally sustainable transport methods, creating a “green” rider and coming up with more sustainable ways of organising and marketing his concerts.

One of the problems in the arts industry could be as basic as the lack of information. Help can be found through various associations and organisations. Julie’s Bicycle maintains a website with many practical guides towards more environmentally conscious practices in the creative industries. Festivals are another forum for sharing information and searching for solutions. For instance, Stockholm’s Baltic Sea Festival this August will present a program with many music or spoken word events focusing on sustainable development.

Finland Festivals, the umbrella organisations for Finnish festivals, has been involved in developing the EcoCompass certificate which seeks to define common guidelines for events and businesses. A dozen music festivals have already committed to the initiative. For a small organisation with limited resources, however, committing to the process is not always self-evident or straightforward: each participating festival is subject to a rigorous auditing process as well as having to budget for extra costs.

The best solution would ultimately be to increase environmental consciousness at the grass root level. Teacher’s Climate Guide offers teachers of different subjects – music teachers included – practical tools in Finnish, Swedish and English on how to include the topic of climate change in their teaching.

[A short research video exploring how the environmental cost of recorded music has changed over history. Directed by Graeme O’Hara with illustrations by Anna Miles and narration by Kyle Devine and Matt Brennan.]

Demand changes as a music consumer

A layman might falsely assume that listening to recorded music is eco-friendly in this era where physical recordings have been replaced by streaming services. A recent research collaboration between the University of Glasgow and the University of Oslo, however, demonstrates the opposite: while the amount of plastic produced by the music industry has declined since the golden era of vinyl records, the rise of streaming services has caused the levels of carbon emissions caused by the music industry to rise higher than ever before. (See also the video.)

The Vice Magazine has published a slightly tongue-in-cheek list of ideas that an individual music fan can try out, but at the end of the day, eavesdropping on your neighbour’s music or switching from amplified to acoustic instruments will hardly save the planet. An individual music consumer’s best options to make a difference are ultimately connected to small choices and to direct influence. Greenpeace’s Tiainen offers a few helpful hints on concrete ways to influence:

”Streaming businesses are experiencing massive growth and all of the involved operators are huge electricity consumers. Musicians and private consumers can ask Spotify, for example, to disclose the electricity provider for their servers and how clean that energy is. As paying customers, streaming service users are entitled to demand information and better operational models. Even better if they can do so publicly.”

The same goes to all forms of customership. If you notice that your favourite club keeps providing plastic straws or requires that you print out your ticket, why not give feedback? The more of us do so, the more likely it is that we see changes.

FMQ offers aspects of music in, from and beyond Finland. Subscribe to the FMQ e-newsletter here to receive monthly news about our publications.