Several eras and genres are represented in the domain of Finnish traditional folk singing: ancient runo singing, roundelays or Reigenlied, and medieval ballads. Inspiration from and combinations of multiple styles have resulted in a wealth of new repertoire that reflects and comments on our own times.

Contemporary folk music in Finland is a happy marriage between a strong sense of tradition and the creation of original lyrics and music. Many new songs are rooted in traditional singing styles, and older songs can be adapted to virtually any personal idiom, combining lines from here and there and adding original material as required – or creating new music to traditional lyrics.

A good example of how ancient poetry can comment on the modern world is the track Raivopyörä [Whirl of Rage] on the debut album of Maija Kauhanen, where she blends traditional poetry with her own words in a comment on domestic violence. The listener can never be sure which is which.

The tradition known as runo singing is the oldest stratum in the heritage of Finnish traditional vocal music. Its roots demonstrably go back some two thousand years. In the 19th century, Elias Lönnrot collected orally transmitted folk poetry and fashioned the compilation now known as Finland’s national epic, the Kalevala. The poetry in the runo singing tradition is all in the same metre, trochaic tetrameter (with occasional metric exceptions); it is not rhymed but features frequent alliteration and repetition. Among folk music ensembles active today, Okra Playground is an example of a group combining ancient poetry with new lyrics and music. The output of Tuuletar exudes a love for the language of runo singing, even if their material does not directly draw on the traditional stock.

The Kalevala is mainly about manly adventures and myth, but the runo singing tradition includes much more, such as wedding songs and lullabies. Over the centuries when most of the population were illiterate, the oral tradition was an important vehicle for transmitting cultural knowledge and heritage, and stories were sung or chanted rather than recited. Principal performers of runo singing today include Ilona Korhonen, Taito Hoffrén and Outi Pulkkinen, each employing an original style ranging from straightforward narration to dramatic performance incorporating vocal improvisation. Runo narratives have been explored for instance by the Suunta ensemble in collaboration with British storyteller Nick Hennessey.

There are further important genres in the runo singing tradition, such as laments performed at weddings, at funerals and when men went off to war, and dramatic spells invoking a variety of effects such as healing or an aphrodisiac. Traditional spells are sometimes drawn on in contemporary folk music, as witness the striking spell against a snake bite on the track Äijö by Värttinä. Speaking of which, on Värttinä’s album Viena there is also an example of yoik from Dvina Karelia, a rare singing tradition with improvised wordless passages that resemble the Sámi yoik. 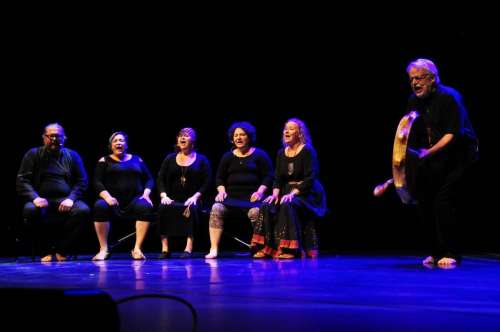 From roundelay to ballad

Roundelays represent a rather more recent stratum of folk song. These are known in Finnish as rekilaulu, which translates literally as "sleigh song" but is actually a corruption of the German Reigenlied. These became common in Finland in the 19th century. They are generally stanzaic, with four-line stanzas that rhyme. Among contemporary folk music practitioners, the vocal ensemble Ilo Ensemble in particular specialise in roundelays, creating original songs for instance about everyday life with small children. Historically, both runo poetry and roundelay lyrics were freely matched with a variety of melodies.

Broadsides (Finnish: arkkiveisu, literally "sheet song") are another newish genre of folk song. These are songs that were printed on sheets of paper and sold to the public, generally to convey news or rumours from the outside world or to provide entertainment in the form of love stories, for instance. The polska tradition, which arrived in Finland in the 18th century, fostered a body of brisk songs in the triple rhythm of the polska. Polskas, as indeed other folk dances, were also sung with nonsense syllables to provide dance accompaniment if no instrumentalists were available.

These newer strata of folk singing are also common among minority populations in Finland. The Roma in Finland adopted roundelays in the 19th century, and Hilja Grönfors is prominent in upholding this tradition alongside the older modal vocal style and the newer, freer style of folk singing. Most of the traditional Roma songs known in Finland today are in Finnish.

Polskas and broadsides were popular not only among the majority Finnish-speaking population but also among the Swedish-speaking minority, who also upheld the Nordic ballad tradition whose roots go back to the Middle Ages. Maria Kalaniemi and Marianne Maans have performed traditional ballads in Swedish.

The Sámi vocal tradition is very different from all of the above and as such is beyond the scope of this article. (Read more about modern yoik here.) 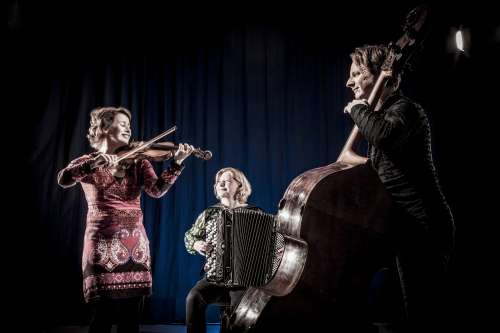 In the field of Finnish contemporary folk music, the aforementioned styles coexist with performers’ original material in many cases. Some musicians specialise in a particular sub-genre, but many command a plurality of styles.

Some examples of traditional and contemporary lyrics:

Sorrow sears so hard my heart-strings,
worry warps and splits my stomach;
wicked words, where is my shelter,
from the jeering jaw my refuge?

Finland’s largest poison mushroom
grew in the Espoo forest deep.
I would sell my own mother and bridegroom
if I could only get some sleep!

Magdalen went to the wellspring’s side
– sun shone so brightly –
when our Lord Jesus came to her
– all in the grove that was greening.

The Lord asked her for water to drink
– sun shone so brightly –
if only I can reach the cup
– all in the grove that was greening.


Magdalena på Källebro [Magdalen at the wellspring], traditional lyrics, performed by Maria Kalaniemi. Traditional ballad in Swedish with two internal refrains (lines 2 and 4) that are repeated in each stanza.

Music of the Finnish Romani: roaming and singing