Jazz composer and musician Heikki Sarmanto was one of his generation’s foremost figures in the 1960s, when Finnish jazz moved away from the traditional towards a more original sound. Another Finnish jazz revolutionary who has been unconcerned about music genres is Henrik Otto Donner, although the two men’s approaches have differed.

The birth of Finnish jazz is considered to have taken place in the 1960s, when a generation of musicians emerged who wanted to shake free of the influence of traditional jazz and do something more original. This development saw the rise to prominence not only of strong soloists but also jazz composer-musicians.

This generation’s best known jazz composer internationally is Heikki Sarmanto (b.1939), who began his career writing music at the start of the 1960s when he took part in a jazz composition competition in the USA with his piece Opuscule. He was also the first jazz musician from Finland to be admitted as a student to the prestigious Berklee College of Music in Boston.

In the 1970s Sarmanto was involved in the founding of the first Finnish professional jazz orchestra, UMO, and the organisation of courses in jazz at the Sibelius Academy.

Sarmanto’s compositions mainly had a good reception in Finland in the 1970s. The reviews praised in particular the orchestration, the sense of theatre and the individual and natural melodies. By the middle of the decade Sarmanto had gained high status as a Finnish jazz composer, evidence of which is provided, for example, by the following statement made in 1976 by Lauri Karvonen, jazz critic for Helsingin Sanomat.

“Sarmanto is perhaps the only Finn to have attained such artistic and technical heights that his every record can be relied on for quality ... a complete flop is simply out of the question.”

Sarmanto lived up to the demands of new jazz in Finland in those times: there was a need for reliable and professional composers whose music would be carefully crafted and original – to make it stand out internationally – but it also had to be of a satisfactorily high standard technically and artistically. In other words, Finnish jazz needed a figurehead.

But was Heikki Sarmanto the right person for that role? And was he even interested in playing the part?

Although jazz is obviously the type of music Sarmanto likes best, there is an inner conflict in the way he relates to it. In a radio interview in 1971 with Åke Granholm he said that he did not like the word jazz as it made people think of music in terms of categories. For Sarmanto jazz means music as a means of expressing oneself, and not music according to a certain style. As a composer he has been disinclined to commit to any one genre but has always endeavoured to incorporate features of classical music, folk music or poetry into his music.

Some time in the 1970s Sarmanto began to feel that his work with jazz had become oppressive and was placing too many restrictions on him, so he consciously looked for a way out of his role as a jazz composer.

He tried to break free by composing songs to Finnish poems starting with Onnen aika (Time of Happiness), comprising songs to modernist poetry by Pentti Saarikoski. After that Sarmanto turned towards more traditional, rhyming poetry on National Romantic themes, such as the works of Aaro Hellaakoski, Eino Leino or Lauri Pohjanpää.

Before his actual career as a composer took off, Sarmanto was musically involved in what was Finnish jazz’s most intense modernist movement at the end of the 1960s and the beginning of the 1970s. He played with the Tuohi Quartet, which won the jazz group competition at Montreux and which played avant-garde music. At the same time – the early 1970s – Sarmanto was making records for small ensembles.

His compositions began to feature more traditional approaches to constructing melodies and harmonic progressions as the decade went on. It is most obvious in the compositions inspired by poems, where the move away from the modernist sound to something more conventional is quite noticeable.

In the world of modern jazz such a change in direction is thought to be exceptional, because people often believe that creators of music move from the simple to the more complex and from the traditional to the modern and the avant-garde.

Writing music based on poetry also brought Sarmanto listeners who were not especially into jazz but knew the works of Leino, Hellaakoski and other Finnish poets. Sarmanto remained popular throughout the 1970s and whatever he did was always followed closely by the press.

In 1978 the New Hope Jazz Mass received its first performance at the opening of St. Peter’s Church in New York. Ten years later the symphonic poem Suomi (Finland) was performed for the first time at Carnegie Hall. These large-scale performances brought Sarmanto international recognition and placed him squarely on the world map of jazz and concert music.

If we compare the works written at the end of the 1970s with those from the start of that decade, it is noticeable how the distinct Sarmanto sound began to be heard. As the avant-garde influences fades away, his own individual style emerged. The compositions feature strong lyrical melodies and clear harmonic structures, which Sarmanto subtly enriches with atonal elements.

Despite the fact that large-scale works for big orchestras appear to be what Heikki Sarmanto’s career as a composer has been all about, he himself regards his work with small ensembles as being the closest to him in spirit. For Sarmanto the melodic theme is the most important compositional element, and it has to be strong enough to inspire the soloists to improvise around it. The solo improvisations may well be free, in terms of melody, harmony and rhythm, but Sarmanto thinks that in the end they have to blend in with the atmosphere the theme creates.

Sarmanto basically regards himself as a free improviser as most of all he takes pleasure in the way the music comes alive in the spontaneity of the moment and is not really very interested in the development of themes on the manuscript paper. Sarmanto does not normally write a theme down as musical notation, unless he hears it first in its entirety. In his view he does not actually compose anything, because the themes simply occur to him. If he forgets a theme before he has time to write it down, he believes it was not worth remembering. Music for Sarmanto is above all a way to express one’s feelings, not the application of any compositional techniques or methods to music.

Heikki Sarmanto has a few trusted colleagues with whom he has collaborated for years. One in particular is the saxophonist and flautist Juhani Aaltonen, who has performed on the majority of Sarmanto's records and usually in a key role as soloist. They have been playing together since 1964. Aaltonen felt a natural affinity for Sarmanto’s compositions right from the start and the personal chemistry between the two men works well.

Juhani Aaltonen has had a similar experience working with another veteran composer, Henrik Otto Donner [1939-2013]. Aaltonen, who is known in Finland as a pioneer of free jazz, has also played on a number of Donner’s recordings and is a trusted saxophonist for both Sarmanto and Donner.

The three of them have several other things in common, such as an interest in poetry and the natural transcendence of genres in composition. For example, Donner’s disc from 1970, En soisi sen päättyvän (I Wish It Would Not End), consisted of works based on the poems of Pentti Saarikoski. Both Sarmanto and Donner have also been involved in light and popular music and have made use of classical music techniques in their compositions. 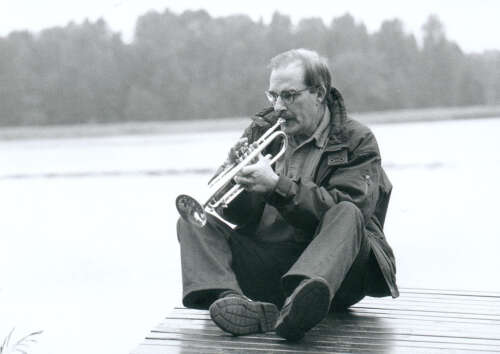 One of the most important recordings for Otto Donner is Strings, made with Juhani Aaltonen and released in 1976. The disc’s name not only refers to the prominent use of stringed instruments on the album but also to the almost telepathic connection that Donner and Aaltonen have sensed when creating music together. Both artists had the idea of making an upbeat, easy listening cassette to play in the car, though as the project progressed their artistic aspirations grew.

Donner and Aaltonen returned to the Strings disc in the early 2000s, and 2003 saw the release of Strings Revisited, made with the Avanti! Orchestra. The difference between the recordings is a clear reflection of Donner’s change of direction: the older he gets the less he feels the need to write soft, catchy music. He says he thinks composing is now more about solving problems than striving for consonance and achieving an end result that is easy on the ears.

Nevertheless, Donner has always tended to adhere to a tonal approach to music and has said that even if he were to employ, say, the 12-tone technique, no matter how rigorously, he would always use it with reference to tonality.

Sarmanto, on the other hand, has always kept to a major–minor framework, with occasional modal harmonies, in a compositional style that is based on lyrical melodies with atonal elements to enrich the overall sound. He believes that the western diatonic approach to composing music still has a lot to offer the listener and that there is no reason to look beyond this for alternative systems.

The music of Sarmanto and Donner extends over a wide area and for them the barriers that exist between musical genres are only there to transcend. Both have much in common as artists that shun categories, though there are clear differences between them. Donner wanders off into uncharted territory in search of new problems to solve, while Sarmanto draws on the resources of the major–minor tonal system to do something new, while reminding us ali that not everything has to be new all the time. In a way, the loyal connection they have both maintained with Juhani Aaltonen shows that the directions that both composers have taken are equally important and are part of the same musical background.

This article was first published in FMQ 3/2009 and is republished now, in 2021, with the kind permission of the author.