Opera is not necessarily the elitist pursuit of only a small city set. Pentti Tynkkynen, a church musician living at idyllic little Punkaharju in Eastern Finland, composes opera on the community’s terms.

Operas in the standard international repertoire can be seen at many venues in Finland, yet ones with a local element also seem to appeal. They often run for many years, and to large audiences.

Pentti Tynkkynen (b. 1943) is a musician working for the Evangelical-Lutheran Church. In addition to his day-to-day duties, he has composed a dozen operas with a local orientation that have been performed and seen by ordinary Finns across the country. What is more, these productions are mostly put on as a joint voluntary effort.

Tynkkynen can well be called a local composer of local opera.

Eight of the twelve operas by Pentti Tynkkynen deal with local history and four are religious. All but one have been performed. There are plans for premiering his most recent one, Temppelipelimanni (The Temple Musician) in Tampere in autumn 2018. Operas by him have drawn large audiences, while others have been small-scale school productions, and some have been ‘portmanteau’ ones easy to transfer from place to place. Historical characters combine with local settings; hence audiences and performers have no difficulty identifying with them, and they can be a means of processing painful issues.

Tynkkynen wrote his first opera, Karhu (The Bear), in 1995, while he was working at Virrat in Central Finland. Based on a libretto by Uolevi Nojonen, whose roots were in Virrat, it tells of a local bear hunter, Matti Kitunen (1747–1833). The opera was performed for three summers, by a wilderness lake in a nature reserve, and attracted a total audience of around 20,000.

Vänrikki Stool (Ensign Stål) is organically tied to Kuru, where Tynkkynen was cantor from 1991 to 2003. The most renowned figure in Kuru history was Carl Gustaf Polviander (1788–1876), an Ensign who fought in the war of 1807 between Sweden and Napoleon’s forces in Germany and in the war between Sweden and Russia of 1808–1809. Finland’s future national poet Johan Ludvig Runeberg often visited Polviander and found material for his own literary work in the old soldier’s tales of the wars. Polviander is thought to have been the model for the main character in Runeberg’s Vänrikki Stoolin tarinat I–II (Tales of Ensign Stål I–II).

This is not the only Tynkkynen opera associated with Runeberg. The one named after the poet himself, Runeberg, traces the process that led him to pen the poem that would serve as the words of the Finnish national anthem, while Roth & Spoof has links with both Runeberg and Kuru and tells of the war of 1808–1809 from two soldiers’ perspective.

Two of Tynkkynen’s operas – Kuru-laivan tuho (The Sinking of the Kuru) and Huutolaistytön laulu (The Waif’s Song) – tell of tragic human fates in the places where the events are set: the sinking of a steamship that set out from Kuru, and the bleak fate of waifs and strays sold by auction by the local authorities to whoever made the lowest maintenance bid. This latter opera has proved highly popular in the Tampere region and especially Hämeenkyrö, where these auctions actually took place, as many people there could personally recall the practice. The opera thus provided a positive way of bringing the distressing experience out into the open and putting it in the past. 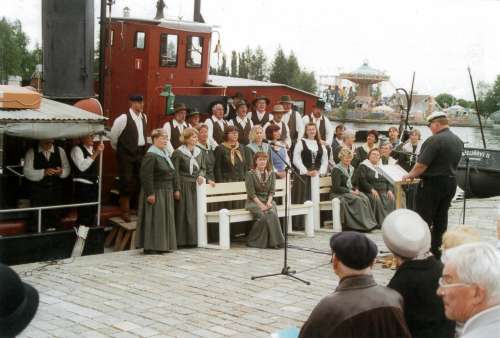 Professionals and amateurs together

Tynkkynen’s first compositions, intended for use in his parishes, date from the late 1960s. He had trained as a church musician at the Sibelius Academy and found that his male and church choirs always sang the same – or at least similar – songs, and he was keen to update the repertoire.

Choirs have featured large in Tynkkynen’s opera projects. Choral societies have produced the operas, performed them and seen to things such as costumes and sets.

Tynkkynen works on the principle of having his operas performed mainly by amateurs with a few professionals. The latters’ job has been to ensure a sufficient artistic standard and to encourage the amateurs. Tynkkynen has always composed and arranged his operas to suit the available resources.

“It was my idea to have soloists from the Finnish National Opera in the leading roles,” he says. “They raised the local amateurs to an incredibly high standard by coaching them and simply being there.”

Having professionals has, according to Tynkkynen, also influenced the funding: local authorities have got excited on hearing that well-known professionals were available for productions. In addition to locals, Tynkkynen has managed to gain the support of various organisations, such as the Lions and Rotary Clubs and members of the Martha Organisation. Their support has been considerable in getting projects off the ground.

Tynkkynen has had no difficulty recruiting the people he needs. The projects have been carried out as joint voluntary efforts, and only the professionals, such as the outside soloists and stage directors, have received a fee.

The projects have, says Tynkkynen, greatly boosted the self-esteem of many of those taking part; they have given people’s lives in general extra substance in that they have helped them to overcome shyness or a poor self-image. They have also strengthened the local identity.

“In Kuru, for example, Ensign Stål was very much in evidence in many ways. For the local people, it strengthened their local identity, and it still does. ‘We’ve got something in Kuru that you won’t find anywhere else around here; they haven’t got an Ensign Stål’,” is how he puts it.

For the community, making an opera is also a transgenerational experience, because Tynkkynen wants to get all age groups involved. The same applies with his church choirs:

“I work on the principle that when I’m doing an opera, it’s not just something for adults; it must draw in children and teenagers, too. It’s been a fantastic experience for me as well, for there’s been no sign of an age gap between the youngsters and oldies. We’d have old and middle-aged folk, teenagers and children, whatever was required. And they were all equal members of the community and keen participants.”

Other examples of Finnish operas that fit the definition of local opera include: