Once a year the Folklandia cruise gathers Finnish folk music and dance lovers together for a 24-hour journey on the Baltic Sea. In January 2019 Simon Broughton got on the board.

You can tell it’s no ordinary ferry journey right from the outset. Everyone rolls up to the terminal with the usual wheely bags, but most have an instrument case as well – violin, guitar, accordion or the distinctive trapezoid case of a kantele. This is a giveaway. We’re boarding for the Folklandia cruise, an annual 24-hour journey that goes physically between Helsinki and Tallinn, but goes metaphorically into the heart of Finnish music as well.

On board there are ten stages, 3,000 people and almost continuous music. Officially there are 130 groups starting at 6 pm and ending at 3 pm the following afternoon. There are a few hours’ break from about 5 am, but heading to my cabin at that time I had to climb over a dozen musicians furiously jamming on the stairs.

I have to sing praises for the accommodation. As an invited guest, I got a luxury cabin with a sea view and more space than my Helsinki hotel. That place to escape was essential to recharge several times during the night, and a panoramic view across the ocean is a rare treat. Opposite were four people crammed into a cabin with no window, but they were having a great party with drinks and music and seemed perfectly happy with their choice.

Folklandia has a "main stage", the Ocean Club, where headline bands such as Sväng and Frigg are programmed. The harmonica (mouth organ) quartet played some highlights from last year’s brilliant Sväng Plays Tango album and, more patriotically, arrangements of Sibelius’s Karelia Suite. The arrangements are super-inventive and the band look great on stage – with Eero Grundström and Eero Turkka on regular harmonicas, Jouko Kyhälä adding harmony on a harmonetta, rather as if he’s blowing into a transistor radio, and Pasi Leino on a bass harmonica that looks like an electric toaster. For the tango tracks, a pair of dancers join in a slow-motion choreography, occasionally freezing into emblematic poses, strangely suited to the melancholy longing of Finnish tango.

The two headline bands show two contrasting sides of Finnish music straight away. Sväng bring an inventive and unique sound – I don’t think there’s another harmonica quartet anywhere in the world – plus a quirky humour. Of course, there’s also something very Finnish about them, combining the tango, Sibelius and that understated playfulness.

What Frigg demonstrate is the richness of the Finnish fiddle tradition and its heartland in Kaustinen. They too are inventive and exciting, but more about respecting the tradition and taking it to the world. They are among the Finnish bands regularly touring in Europe and beyond. 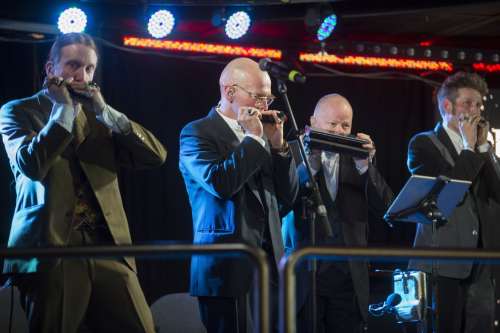 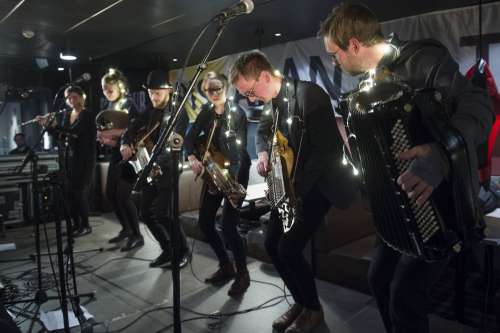 Folklandia is a music festival on sea – with all the problems of clashing gigs and everything happening at the same time that come with any festival. I wanted to see Etnogaala award-winning band Pauanne as well as the international Sibelius Academy group Farandi, so I missed the midnight quadrille which, with the right partners, would have been immense fun.

There are also spontaneous gatherings that you can’t even plan. There was one I didn’t see, but was told about afterwards, which seemed like a great Kaustinen gathering with fiddler Siiri Järvelä (daughter of Mauno) at the helm. There were fiddles, guitars, even a harmonium! What is important in a folk tradition is having enough people who know the repertoire – that clearly wasn’t a problem here. It was Phillip Page, who managed Värttinä and JPP for many years, who enthused about this session outside the Europa Theatre and he must have witnessed many such jams in Kaustinen over the years.

The Ocean Club and Europa Theatre – hosting the large folk-ensemble and dance performances – are the better stages. The other places are sonically challenging with low ceilings, chatter from the bars and passing traffic weaving through. The carpets are very busy with swirling lines and coloured blobs – probably to hide the stains. They make you feel drunk, even if you’re not.

As the cruise goes to Tallinn and back, Estonian bands are the main guest artists at Folklandia. I enjoyed Mandotrio – a lively trio of mandolins that could work at almost any acoustic music festival – and Rüüt, a quartet of two men and two women. The men both play intricately decorated Estonian accordions, while the women play melodica and violin, and sing.

These groups were in the best performing area, the so-called Top Club, where there wasn’t any through traffic. But my favourite Estonian artist was accordionist Tuulikki Bartosik playing with Timo Alakotila on electric piano. She played an opening phrase and then fluttered her hand over the bellows, the vibrato making her instrument seem almost human. She seems to be visualising a world inside her head which makes the music more descriptive to us. Her instrument weighs 14 kilos but she seems to be dancing with it, and it’s captivating.

Timo Alakotila, accompanying her, must be the busiest man at Folklandia. He was involved in four different concerts, including a headline CD launch of Mingled Years, an orchestral piece with accordionist Hannu Kella. Timo is an inspirational figure, playing alongside a lot of the young ensembles, but when I ask what Folklandia would do without him, he says there are 3,000 more talented musicians to draw on. There aren’t 3,000 musicians like him, of course, but Folklandia shows in its crazy way how fertile the scene is. There’s respect for the tradition, there’s experimentation and there’s plenty of fine musicianship.