When violins first reached the shores of Finland via Sweden sometime during the 17th and 18th centuries, it seems that they jumped straight into the Perho River and swam upstream to the Central Ostrobothnian village of Kaustinen. The local playing tradition has remained unbroken ever since, with each village boasting its own unique playing style. Now the Kaustinen fiddle tradition has been nominated for inclusion in UNESCO’s Intangible Cultural Heritage list.

The more recent tradition of folk music is called pelimanni music in Finnish, derived from the Swedish word spelman. This can refer to a folk player or a man with his instrument, but its more general definition refers to dance music. Finnish dancers first warmed up to polskas which were danced in a circle, and gradually got up close and personal with their partners through minuets, quadrilles, waltzes and polkas.

It is said that while every Eastern Finnish household owned a kantele, there was a fiddle found hanging on the wall in every Kaustinen house. It was, however, probably not quite so black and white: in the Perho River Valley, kantele traditions have coexisted peacefully with fiddles, while Eastern Finnish players have not been shy about picking up a fiddle either. The louder instruments often ruled over the softer-sounding kanteles in dance bands, but recent decades have seen kantele players, such as Maija Pokela and her “pelimanni girl band” Enkel, firmly establishing the kantele as an ensemble instrument.

In 1968, local fiddle-playing traditions sprouted the Kaustinen Folk Music Festival, the first of its kind ever organised in Finland. The festival soon began awarding annual “master musician” titles for distinguished experts in the folk tradition. The Finnish Folk Music Institute with its archives and publishing arm was established in 1974, followed by the creation of Finland’s first government-funded folk music ensemble Tallari in 1986, designed to shake up the folk music scene across the whole country. All of these institutions are still going strong. 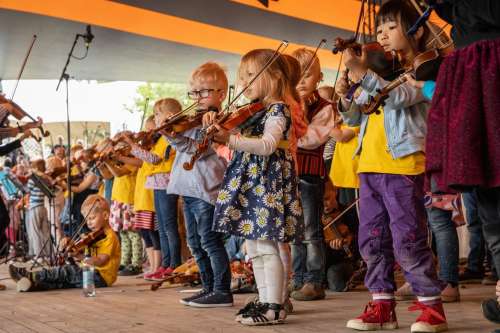 Violinist and pedagogue Mauno Järvelä, well known from the ensemble JPP, returned home to Kaustinen in the mid-1980s after a stint of studying and working in Helsinki and kick-started a new music education system for the local children. The method soon grew into a nationwide movement, eventually spreading to many countries around the world. The Näppäri method’s leading idea is that everyone can play music, with the skilful ensemble arrangements often incorporating singing in order to enable even the smallest fiddlers to participate. The method is based on streamed groups during the rehearsal process, teachers playing along with their students, and the ease of joining in with any instrument. “The Näppäri movement is pure teamwork,” Mauno Järvelä explains. The method inspires players all over Finland and sparks a lifelong enthusiasm to play and keep on making music.

This is nothing new in Kaustinen where people have always played music together, whether at weddings, homes or cafés. Maybe this is one of the reasons why so many Kaustinen-based super ensembles are so big.

Perhaps the most seminal Kaustinen music phenomenon, and the ensemble that started the Finnish folk revival movement, was Konsta Jylhä and his Purppuripelimannit, a folk music ensemble with two or three violins, a harmonium and a double bass. The amazing JPP, active since the 1980s, is like an augmented version of Purppuripelimannit, with slightly wilder repertoire. Again, the more recent ensemble Frigg is even larger in size, keeping the traditional wall of violins and the double bass, but replacing the harmonium with the brighter-sounding plucked strings. More is more!

Small can be beautiful

Solos and duos represent another basic pelimanni concept. These performers have been found all over Finland throughout our history. One gets the impression that being a pelimanni was considered a service profession, including travel to the remotest regions to play at weddings, funerals, dances and home events.

A contemporary representative of this genre is violinist Emilia Lajunen, who finds inspiration from the pelimanni players found in our archives. She has even chosen some of her travel methods to mirror the olden times, replacing the horse and buggy with a bicycle and undertaking a carbon-neutral tour as a soloist and with the Duo Emilia Lajunen & Suvi Oskala. The duo’s programme is an intriguing mix of archival discoveries and the diverse sounds from five-string violins, and they have been selected for a showcase at the WOMEX 2019 event. 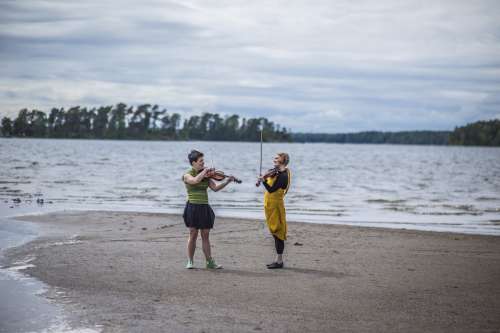 Fiddler on the world map

Even with such strong traditions, Kaustinen folk are not uptight about exploring different musical genres. The small town has produced many esteemed classical musicians, and even the old-school folk players would order new sheet music or learn hit songs from the radio.

There has always been a composing tradition as well, sometimes resulting in virtuosic tunes. One such composer was Wiljami Niittykoski, whose granddaughter Kreeta-Maria Kentala is a violinist, Baroque specialist and pelimanni player. Her concert programmes can include Bach played on a Baroque violin as well as traditional Kaustinen tunes, as showcased on her recent album titled Side by Side. We will find out in October whether she is the recipient of the Nordic Council Music Prize, for which she has been nominated. Harmonica quartet Sväng is Finland’s other nominee for the prize.

Next, the Kaustinen fiddle traditions are set to make their mark on the world map through their inclusion in UNESCO’s Intangible Cultural Heritage list. Various Kaustinen-based associations are working towards a joint performance which is coordinated by the Folk Music Institute. When talking with the Institute’s director Matti Hakamäki it becomes very clear that folk music is alive in three dimensions: the past, the present and the future.

”The conservation of living tradition means to ensure its vitality so that our future generations will have the opportunity to be part of this continuum. Tradition is a source of enormous knowhow as well as a global resource. If we were to lose this due to modernisation, humanity would be less equipped to meet the challenges of the future.”