Bassist Antti Lötjönen is one of the busiest Finnish jazz players, having played on well over 100 records, and in dozens of groups. His solo debut was released in April, just a day before Lötjönen turned 40. This summer, touring will have to wait, but Lötjönen doesn’t mind the breather. In Wif Stenger’s interview, the bassist talks about his music and team playing.

“That was the day that everything started exploding with the coronavirus. I’d been reading the news on the way, and when I met Teppo at the gate, we decided not to go. Aki agreed that it was the right decision and played the shows solo.”

Little did the three imagine it would be June before they would play together again – and that then it would be to an empty club in Turku, streamed live online as a pay-per-view.

Reached by phone in May, Lötjönen had just spent a morning on Zoom giving lessons – something he hasn’t done much before due to a busy schedule of gigs and recordings.

While Lötjönen has kept a modest, low profile out of the spotlight, he is one of the most-recorded Finnish jazz musicians of this century, averaging one release every couple of months since 2003. That’s when he debuted with Ilmiliekki Quartet featuring trumpeter Verneri Pohjola, another long-time comrade who plays on the bassist’s debut, Antti Lötjönen Quintet East (ALQE), released in April.

The quintet features three distinctive horns out front: Pohjola, baritone saxophonist Mikko Innanen, and tenorman Jussi Kannaste, backed by drummer Joonas Riippa. “I just heard these guys when I wrote the music. This kind of line-up isn’t common, a quintet with three horns and no harmony instrument,” says Lötjönen.

“The most important aspect of this for me is getting my vision of jazz out there: rhythmic but free, but not too free. Even though things are very open and free, there’s this loose structure and a kind of rhythmic pulse.”

That pulse, floating and subtle, is provided by Riippa and Lötjönen.

“We try to keep the music alive and bubbling all the time. Joonas has a very open, free approach. He has great ears and a fast mind, and he’s open to all kinds of sounds,” says Lötjönen.

Lötjönen named his group after the Quartet West led by US bassist Charlie Haden, whom he cites as a key influence. Indeed the only non-original track on the album, Mary Hartman, Mary Hartman, was inspired by Haden’s version of the old TV show theme with saxophonist Ornette Coleman.

Another tune, Pocket Yoga, was inspired by Coleman and long-time Haden cohort Don Cherry. Pohjola plays pocket trumpet as Cherry often did, while Innanen adds an elegant, easy-going alto solo. The result is joyous, energetic, and one of the most accessible moments on an album that often veers into challenging free jazz territory.

On the longest piece, Le Petit Lactoire, Innanen’s sax playing on the high-pitched sopranino is searching and keening, never letting the listener off easily. Riippa supplies a subtly rhythmic, ever-changing percussive bed. The album closes with Rowan, with Riippa leading the way with unusual, quirky percussion, blocks and cymbals, as the three horns repeat a slow gentle theme.

Lötjönen’s kinship with the Cherry-Haden tradition pops up again on a new compilation album, We Jazz Live Plates: Lonna, recorded in July 2019 on a Helsinki island. The five-piece plays a delightfully summery, laid-back version of Cherry’s “Art Deco”, originally recorded with Haden.

Lötjönen is one of the busiest Finnish jazz players, having played on well over 100 records, and in dozens of groups. Besides Ilmiliekki, these include Ricky-Tick Big Band, Joonas Haavisto Trio, 3TM, and groups led by Innanen and Mäkynen, as well as by Jukka Eskola and Timo Lassy, fellow alumni of the Five Corners Quintet. The bassist joined that wildly popular dance-oriented band soon after Ilmiliekki, both while still studying at the Sibelius Academy.

Some pieces on ALQE date back to his final recital at the Academy in 2013, but Lötjönen was in no hurry, releasing his debut just a day before turning 40. “I felt the time was right, that I had enough to say. Until now, the art of being a sideman and the art of playing bass has been enough,” he says.

Rather than taking the opportunity to finally put bass solos front and centre, Lötjönen remains humble on his own record. The only bass solos are two brief interludes dubbed Monographs.

“I think Monograph II is an expressive solo piece,” he says. “I’ve recorded a lot of these Monographs, and might release those someday.”

How does it feel to be in the spotlight after all these years?

“I don't really care about the spotlight, but I don't mind. I’ve been next to the guys in the spotlight for 20 years. I’ve seen it all and been involved in it, so it’s not that different. But it makes me very happy if people like the album and the music.”

The album is a contrast to Pohjola’s album The Dead Don’t Dream, released two weeks after ALQE and also featuring Lötjönen.

“Verneri produced his album more, but there's a lot of magic on it. For mine, we just did a couple of takes per tune and almost no editing. I've always loved jazz albums that aren’t too perfect. Imperfection makes it interesting. For me, it's a big part of this music,” says Lötjönen.

“Verneri and I have played together for almost 20 years, and we’ve been friends almost my whole adult life, so we can almost read each other’s thoughts, like with Teppo. Nothing that compares to that, to knowing someone so well musically.”

“Those two groups were very different,” he says. “Ilmiliekki is more original, and is still going strong. We did some gigs early this year and are thinking about the next album. Five Corners was based on a hard bop idiom and a club vibe that was trendy at the time, dancefloor jazz.”

After selling boatloads of records, touring Europe and Japan and collaborating with US jazz singer Mark Murphy, Five Corners was shelved a decade ago, except for trips to Japan in 2012 and 2019.

“We went back to Japan last October to play at the Montreux Japan festival, but a typhoon hit so most of the festival was cancelled. It was a weird trip. We ended up playing at a very small club in a cellar with about 30–40 people. We were glad to play, since we’d rehearsed after not playing the stuff for years, but the gig wasn’t recorded.”

As to the future, he says the group “might still do some kind of nostalgic reunion, but probably not new music. Never say never, though.”

Five Corners was the brainchild of producer Tuomas Kallio, who launched Flow Festival in 2004 and leads it to this day. Lötjönen has played the Helsinki summer extravaganza more than any other artist, every year from 2004–2018, missing only last year. The festival is cancelled this year. 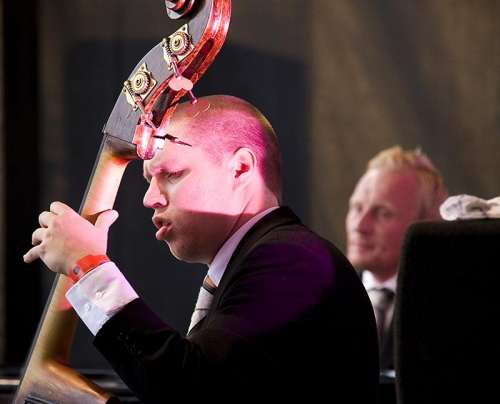 The usually hectic summer gig season looks mostly empty so far, though he hopes to revive the “Hietsu is Happening!” series at Helsinki’s Hietalahti beach which he, Innanen and guitarist Petri Kumela have hosted since 2016 – this time outdoors with social distancing.

A record release show at Helsinki’s G Livelab has been postponed to October. In April Lötjönen joined Pohjola for a studio show for the Finnish Broadcasting Company Yle.  In June he reunites with Rissanen’s trio for a concert streamed by Turku’s Flame Jazz. Then it’s a Flame Jazz Home Delivery event with Pohjola’s band.

“You can order a band to play in your street or garden. The band will play short sets on a stage built on a trailer, which moves around during the day. Let’s see how that works.”

Touring will have to wait, but Lötjönen doesn’t mind the breather. “I've been travelling a lot. I’m really trying to cut down on flying, but it's very difficult in this profession,” he says.

While Lötjönen has mostly stayed busy at home, he has also toured Europe with American guitarist Kurt Rosenwinkel and drummer Jeff “Tain” Watts.

“Antti is greatly respected by the Finnish jazz scene and has made his way to play with greats such as Watts and Rosenwinkel,” says electric bassist Timo Hirvonen, who runs Koko Jazz Club. He taught and jammed with Lötjönen while they were youngsters in Kuopio, eastern Finland.  “Antti has made a beautiful passage to the frontline of upright bass players,” says Hirvonen. “He’s a team player who always takes care of the big picture – a real gentleman who’s always had a very natural relationship with the bass.”

As the conversation draws to a close, Lötjönen returns to Haden, who died in 2014.

“I’ve always been a huge fan, but guess you can’t be a fanboy anymore when you’re in your 40s,” he says with a chuckle. “It’s not just his playing, it’s his whole vibe. He wasn’t into being a tough, cool badass like some jazz musicians. Haden seemed like a very spiritual guy. He said ‘if you strive to be a good person, maybe you might become a great jazz musician’. I’m trying. I’m trying to be a nice, humble person, to respect others. Hopefully that carries over to the music.”