Kaisa Mäensivu studied double bass at the Sibelius Academy and continued her jazz studies at the Manhattan School of Music. She is now creating a career in various ensembles in the USA and Finland. How did she end up becoming a jazz professional? And how would she compare her experiences of the jazz scene in Helsinki and New York?

Jazz has been a part of Kaisa Mäensivu’s life ever since childhood, as her mother was a die-hard jazz fan who took her daughter with her whenever there was a jazz gig in their home town, Hämeenlinna. “I played classical piano to begin with, but I soon realised that it wasn’t what I wanted to do,” says Kaisa of the origins of her musical life.

The double bass came in at the age of 14. Kaisa saw a music video with a woman playing double bass. “I said at home: ‘I want to play that too,’ and my mother immediately had me taking double bass lessons,” says Kaisa with amusement.

The lights of the big Finnish city

Gigs were few and far between for a young double bass player in Hämeenlinna, and Kaisa began seriously to think about moving to Helsinki during her last years in comprehensive school. This came about when she was admitted to the Sibelius Upper Secondary School. (Click here for an FMQ article about the school.)

Studying with like-minded young musicians at the Sibelius Upper Secondary School was an important time for Kaisa, and her appetite for jazz grew. “It was in upper secondary school that I learned to listen to jazz. It just sounded so interesting, and I wanted to find out what was going on and what the people playing that music were doing.”

At the same time, she began to study bass at the Pop & Jazz Conservatory, first at the basic level and later, after completing school, in the vocational education programme. She then went on to study at the Department of Jazz at the Sibelius Academy, where her teachers included Ville Herrala and Antti Lötjönen.

Hindsight by Cedar Walton, Manhattan School of Music, May 2017.

Making it in Manhattan

At the Sibelius Academy, Kaisa Mäensivu made a far-reaching decision. After completing her B.Mus. degree, she applied for and was admitted to the master’s degree programme at the Manhattan School of Music in New York, where she studied with Jay Anderson.

Kaisa describes the teaching at both the Sibelius Academy and the Manhattan School of Music as being of extremely high quality, but with many notable differences. The most significant of these is the price tag.

“School in New York is incredibly expensive, in Helsinki not so much. That means that in Helsinki more people have the possibility to study.”

Kaisa notes that in her experience, students are encouraged to be distinctive and individual to a greater extent in New York than in Finland. She also reckons that she did much more homework while studying in New York than at the Sibelius Academy. Also, the importance of composing and arranging was particularly emphasised in her jazz studies at the Manhattan School of Music.

The Sibelius Academy, meanwhile, has the advantage of having a small jazz department – about six students admitted per year – which guarantees a higher rate of one-on-one tuition and potential for students to influence the content of the teaching. At the Manhattan School of Music, Kaisa was in a class of 30 to 40 students, of whom six were bass players.

“There’s something to be said for a large group. It’s a great thing to have colleagues in your class with whom you can talk about bass stuff.”

Kaisa would have a hard time ranking the schools, though. “For me, the ideal situation would be to have the Sibelius Academy Department of Jazz on Manhattan,” she says.

The jazz scene in New York is highly competitive, and there is no end of musicians striving for their big break. There is enormous stylistic variety within the city, even between districts. Jazz sounds different in Brooklyn than it does in Greenwich Village, for instance.

“In New York it’s maybe easier to choose a niche for yourself, whatever that may be, because you can be virtually sure of finding like-minded people and clubs. In Finland, things tend to sound pretty much all the same,” says Kaisa Mäensivu.

So how would she herself improve the availability of jazz in her native country?

“Live music is pretty well available. If there were more venues, then maybe there wouldn’t be enough listeners to go around. But I would like to see more diversity, to hear different types of jazz at different clubs.”

What she would export from Finland to New York is a dose of humility.

“People often have such a self-satisfied attitude when they show up to play at a jam session. There’s also a lot of praise and encouragement in New York, but all that is really pretty shallow.” 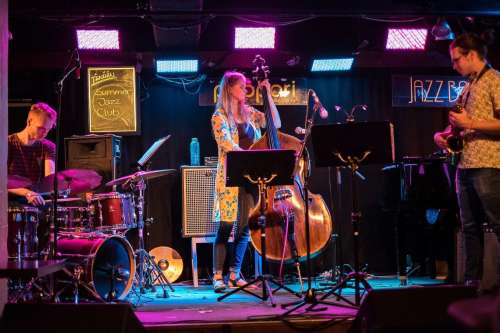 The machine goes on

Kaisa Mäensivu completed her studies at the Manhattan School of Music in May 2017, but she stayed on in New York. “Maybe I’ll return to Finland one day, we’ll see. My artist visa just came through. That means I’ll be allowed to work in the USA for three more years.”

At the moment, Kaisa plays with several combos New York as what is known as a sidewoman. Every now and again, she gets her own compositions performed.

Kaisa enjoys the role of sidewoman: “It’s much easier to be a sidewoman than to be out there performing your own material. I’m really happy with these bands and their members. At the moment, I have no need to perform my own music in New York,” she says.

However, being a sidewoman and writing your own music are not mutually exclusive, quite the contrary: “Those two roles feed into each other. Because I know how to lead a band, I can be a better sidewoman.”

Kaisa often visits Finland, where she keeps a band named Kaisa’s Machine rolling and plays with them as much as possible. “What I like about my job is the diversity and the ability to make music in all kinds of projects. I hope to be able to maintain a good balance between being a band leader and being a sidewoman,” she says, describing her artistic profile.

Asked about the future of jazz, Kaisa hopes for both the upholding of tradition and the creating of new traditions. “For me, the most important thing is that jazz stays alive. I’m not so worried about it languishing in the margins, because jazz will always go on, one way or another.”

In spring 2019, Kaisa aims to complete a master’s degree at the Department of Jazz at the Sibelius Academy. Her dream is to play in a band with her idols and to tour the world. “But I need to do a lot of work out there to make that happen. It’s a long haul! As long as I can play with good musicians, I’m happy – wherever I may be playing.”

Kaisa Mäensivu has been appointed as artistic director of Savoy JAZZFest for 2023-2024. Read more (in Finnish) here.