According to the festival programme, Frigg, a band from Finland that made their first Dutch appearance at the Celtic & Balfolk Night in Rotterdam on 18 February, “sometimes sound like a polka band, sometimes like a Riverdance troupe and sometimes even like a rock band”. And they did, even though they didn’t show their rough and edgy side right from the start.

Not having seen the band before, I was surprised by the unusual line-up, with no fewer than three fiddlers. (They were even one fiddle short that night, as we would learn later.) Another odd item in Frigg’s armoury is the cittern, played by Petri Prauda. This instrument, with its roots in medieval times, is a rare sight these days. Its closest modern relative is the Portuguese guitar, instrument of choice for accompanying fado.

Also rather uncommon in Nordic traditional music are the mandolin and the dobro, which turned up from time to time in the hands of Prauda and guitarist Tuomas Logrén. Their main task, however, alongside double bass player Antti Järvelä, is to support the string section that fronts the band on stage. But with Frigg that doesn’t mean the usual division between backing and soloing. Frigg’s forte is their tight and seamless ensemble playing instead.

Even though Frigg are neither quite Celtic nor Balfolk material, they received a warm welcome. The Celtic & Balfolk Night is a bit of a stranger among festivals, and consists of two parallel events: a concert programme with a seated (and generally older) audience and a folk dance gathering attracting mainly youngsters. Although it may seem odd, this is actually a smart idea, because it creates a setting in which the two populations can mingle. With over 1500 visitors anually, it is by far the most successful folk event in the Netherlands for many years. Quite an achievement, considering the fact that “folk” has been looked down upon by the local hip and trendy for several decades. 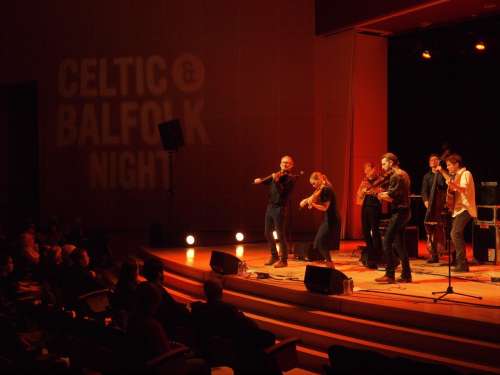 The upstairs auditorium of De Doelen, Rotterdam’s main concert and conference venue, was already filling up with an eagerly awaiting audience while the band was still doing its sound check. Leaving the stage, only to return a few seconds later, seemed like a mere formality to mark the beginning of the concert. Yet there is nothing formal about the band’s demeanour on stage. These musicians are not about showing off. They are also not intentionally creating a visual spectacle on stage, even though the sight of the three fiddlers moving their bows in perfect sync is a sight to behold.

I was particularly impressed with the way they manage to blend different styles into an amalgam that is distinctly their own. The music is obviously rooted in Nordic and Celtic traditions, but Frigg has also been strongly influenced by American bluegrass, or rather Newgrass, the style developed in recent years by the likes of David Grisman, Mark O’Connor and Edgar Meyer.

It’s a good thing Petri Prauda, who did most of the talking, was not trying to outsmart Didier Laloy, who had just finished his set before Frigg. He would have been no match for the devious absurdities in garbled Dutch by the grumpy squeezebox player from Belgium. Nevertheless, Prauda did coax a good laugh from the crowd when he announced a tune that required audience participation. After issuing a “serious” warning to everyone that they would have to learn some words in Finnish, a notoriously difficult language, he waited a little and then demonstrated the part, which turned out to be a wordless phrase. After the roar of laughter had subsided, the audience was more than willing to sing along.

The set Frigg played at the Celtic & Balfolk Night was carefully built up. After a traditional opener, they played an interesting original composition by Esko Järvelä, the third of the Järvelä siblings who make up almost half the band, and also the fiddler who was ill at the time (as we learned from the dedication). After Vierivä, the tune by Logrén which served as the basis for community singing, the concert reached a dramatic climax in Summer Solstice, a lengthy piece by Antti Järvelä that moved through various musical landscapes, from fast and furious to calm and melancholic and back.

To round of their set, Frigg played a traditional wedding march from the west coast of Finland. With its stately rhythm and pace it was the perfect ending to a great show.