PREVIOUS ARTICLES FOLLOWING ARTICLES
Whose are the voices we hear at concerts? Which stories are conveyed through art music, and which are not? Questions like this are becoming increasingly common, and now we are starting to find answers to them. The Helsinki Philharmonic Orchestra is engaged in a project titled HUOM, History's Unheard Orchestral Music. The project is reviving orchestral music written by Finnish woman composers in the 19th and 20th centuries, thereby re-evaluating our cultural history, revitalising our concert institutions and fostering new collaboration between music scholars and performing musicians.

A couple of years ago, the recurring debate about plurality in art music arose again in Finland, this time with a bigger noise than usual. Aleksi Malmberg, General Manager of the Helsinki Philharmonic Orchestra, notes that at that point at the latest everyone active in the field of music was forced to contemplate who exactly have been, are and will be in the canon of Western art music.

“I became aware of plurality issues back when I was a musicology student. Improvement has been slow and painful, because the art music heritage is so deeply rooted in the chauvinist world view of the upper classes of the 19th century,” says Malmberg. As General Manager, he began to contemplate how to explore plurality in a way that is sustainable for music and for society at large. While orchestras already have the sustainable duties of upholding the tradition of Western art music and of creating a future for that tradition with new music, there is also a third duty, as Malmberg explains it.

“We may examine history critically and search for that which has been neglected. That was the initial impulse for HUOM.”

Malmberg was joined in designing the project by Susanna Välimäki, Associate Professor of Art Studies at the University of Helsinki. She had been researching Finnish woman composers of the 19th and early 20th centuries in a project titled ‘Daughters of music’, and with this the concept of HUOM came together: finding orchestral music written by historical Finnish woman composers, making fair copies of the material and having the orchestra play it in a reading session. Only after that would it be possible to re-evaluate our musical heritage by making these works available for concert use, to publish them as sheet music and to tell the story of this music and its makers.

“It was clear from the start that the orchestra could not do this on its own,” says Malmberg. “We needed a network where music scholars, archives, publishers, the orchestra and its conductor dedicate part of their everyday work to this common goal.” 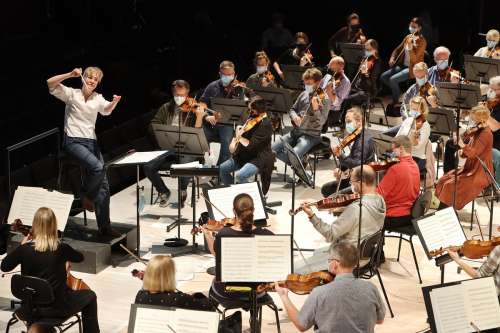 Finding orchestral music neglected by history is not an easy task, but in the ‘Daughters of music’ research project Susanna Välimäki and Nuppu Koivisto-Kaasik had already scoured the archives and unearthed a hundred or so woman composers born in Finland in the 19th century.

“The problem is that a lot of their known orchestral works have been lost, such as the symphonies written by Ida Moberg and Betzy Holmberg,” says Välimäki with regret. “The music was never published or recorded, because women’s achievements were just not considered to have value.”

In the 19th century, the majority of students at conservatories across Europe were women, and musical performance at the grass-roots level was largely the domain of women, but for ideological reasons women back then almost never attained a place in the canon as composers of orchestral music. Välimäki has noted in her research that Finnish women composers wrote quite a lot of solo songs, dances, children’s music and music for gymnastics.

“I suppose we should redefine the profile of a composer on the basis of this material,” says Välimäki. “But for HUOM we did find ballet music and other dance music, appealing miniatures and concertos, the latter being a genre in which women who were also performing instrumentalists could somewhat more easily be heard as composers.”

This body of music has been preserved in archives but in manuscript form and is thus not performable by a modern orchestra in that state.

“It was a surprise to discover how laborious it was to edit the music even to such a point that it was usable for an orchestra reading session,” says Välimäki. They did it anyway, because Susanna Mälkki, Chief Conductor of the Helsinki Philharmonic, considered it vital that the music discovered in the HUOM project should not remain just notes on paper but should be performed at least at reading sessions that bring together the various parties involved in the project. Indeed, the first reading session in autumn 2021 was an emotional event.

“It was a heartfelt moment to realise that it was the first time in a hundred years that anyone had heard this music,” says Aleksi Malmberg. “There have been so many composers who wrote accessible and compelling music but never got their voice heard.”

“I did wonder beforehand whether I would even dare go and listen, given how emotionally vested I was in this project, and indeed many tears were shed,” Susanna Välimäki confesses. “But isn’t it great that the music and the stories behind it have the power to move people so profoundly?”

Musical experiences and narratives are key tools in how HUOM is re-evaluating history.

“An orchestral concert is always a reflection of a particular worldview, indicating whose stories are considered important,” Välimäki explains. “If you go to concerts year in and year out and never hear music written by women of the past, you may unconsciously acquire the view that women’s stories are not important. Then, when you hear music whose story you can actually identify with, it may be a truly moving and affective experience.”

Välimäki stresses that this is the way in which art music will remain relevant in the 2020s. “We can’t just say that this tradition is valuable for its own sake and that’s that. We have to find some new angle to this tradition that can be meaningful for listeners. Exploring a neglected facet of our cultural heritage can be hugely meaningful.”

Some of the meaningful discoveries made in the HUOM project have been programmed at actual concerts of the Helsinki Philharmonic, but there are also efforts to disseminate this music more widely. Enter music publisher Fennica Gehrman, who have been publishing works by historical woman composers in collaboration with a number of researchers.

“This is an interesting sideline for us. We principally deal with composers of our own time, but because of the history of our company we take a keen interest in the history of Finnish music,” says publishing manager Jari Eskola. “Besides, it fits into our strategy of plurality.” 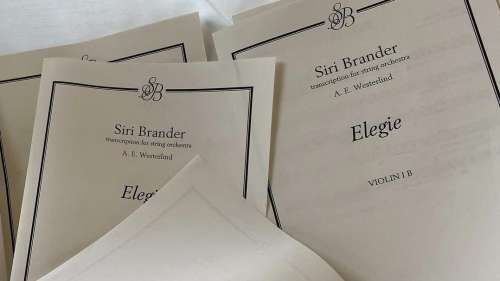 The additions made to the catalogue from this project so far are Elegie by Siri Brander and Stillhet [Stillness] by Ida Moberg. There are further items in the pipeline, such as a Suite by Heidi Sundblad-Halme and music by Ingeborg von Bronsart. Eskola and his team edit the manuscripts for publication, and although this music has long languished in the archives, not all of it tells sad stories of discrimination and neglect:

“What has percolated through to us is music that is rich and coherent, and the challenges in editing the music for publication are exactly the same as with male composers,” says Eskola. “All the same, it is a bit wistful to realise that such fine music was overlooked in its day. The canon is a tough master, regardless of gender.”

Jari Eskola’s job is to read music, but he nevertheless considers the performing of the music discovered in the HUOM project to be the main thing. “Hearing music is the best way of understanding it.”

Practical music-making is also a motivating factor for Susanna Välimäki in her research.

“Research is not just about me writing articles that someone else then may or may not apply in practice. It has been inspiring to find that in HUOM, musicology is action and that all this is being put into practice with Malmberg, Mälkki, Eskola, the orchestra and the entire network pitching in.”

Välimäki notes that HUOM is a uniquely broad and systematic example of collaboration between music scholars and performing musicians, but also the product of a longer trend.

“It used to be the case that scholars and musicians did not necessarily even try to understand each other, but cooperation has become increasingly common.”

“HUOM illustrates that music studies and musical performances are both part of our society,” says Aleksi Malmberg. “I am proud that the Helsinki Philharmonic has brought a wide range of people together to think about what we might perform and why.”

And although HUOM is described in publicity as a ‘project’, it has no end date or ultimate deliverable, as Malmberg points out.

“We may shift our focus and our operating models, but I already feel that this is a practice that has come to stay. It will also help the orchestra think about how we want to contribute to changes in society at large.”