“Although I have delved deep into archives and particularly into the traditional music of the Suistamo area through my research, the fact is that modern folk music finds its inspiration absolutely anywhere, not just in dusty antiquities,” writes Anne-Mari Kivimäki, a composer and the developer of the modern Karelian accordion trance style, who is also known as a member of the band Suistamon Sähkö.

Creating music requires curiosity, an absence of prejudices and the ability to identify the strengths of performers. I write music for a variety of ensembles, being also a member of many of them. Over the past year, writing music has been of major importance to me. This shift in my professional profile happened thanks to the coronavirus pandemic, which scuppered nearly all of my performing engagements. I am fortunate in that I have been able to continue working with music by writing music in a variety of artistic environments; otherwise, I would have ended up pretty much twiddling my thumbs all year.

Creating music is an independent pursuit, and as such it is excellently suited for remote work. However, I also create music together with others. I am often the one who initiates a song, either by recording a demo or writing a few lines of lyrics. Then I bring or send the demo to others, and their interpretation of the material shapes the piece into something that suits the ensemble in question. My recent major projects include the new album of Suistamon Sähkö, Varokaa! Hengenvaara [Beware! Danger], the video Kuka laulaa tätä laulua? [Who sings this song?] made by Suistamon Sähkö in collaboration with international guest artists, and writing the music for the Kalevala X film series. I have also written hymns to commission and music for a dance work named Martat, a stage play at the Tampere Workers’ Theatre and a drama production starring [Finnish actress] Seela Sella.

I have developed a method for creating music of my own. I call it 'Laboratory of Tradition'. It combines echoes from the past, historical events, landscapes from field trips and sounds of the modern world. This method has evolved over time, alongside my work as a performer and researcher of folk music. It requires a comprehensive knowledge of history and an inventiveness for finding new means of expression and new instrumental techniques.

Creating music in the Trad Lab is like painting a landscape. I began to compose landscapes and to train as a musician with Maria Kalaniemi in 1992. From there, my pathway of learning took me to the Sibelius Academy, through the Junior Department to the doctoral programme. I completed my Doctor of Music in 2018; the heading of my thesis was Suistamo – Perinnelaboratorio [Suistamo – Laboratory of Tradition]. Kalaniemi encourages her students to create their own music and to find a playing style of their own in her lessons. I initially searched for landscapes, emotions and moods in music by rooting around in archives. Archival recordings introduced me to a world long gone, of which I could catch glimpses in the performances of the kantele players, violinists, wind players and singers of the distant past. I was impressed by the playing of the traditional fiddlers and their stories, and I became a huge fan of archival recordings. 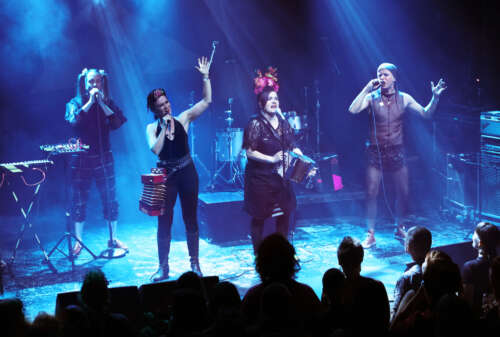 Heikki Laitinen, in his dissertation, described a research method that he titled 'imaginary field trips' and this has been an ideal tool for myself in exploring archival recordings. I close my eyes to listen, and the crackling sound transports me, for instance to Suistamo in Karelia in the early 20th century (part of Finland at the time, but ceded to the Soviet Union after the Second World War): a fiddler is playing a ristakondra or a trepak in the corner of a cottage, the wood floor is thumping, the dancers engage in acrobatic solos and the accordion sings over it all. After making this field trip in my mind, I can take up my own instrument and improvise to create new sounds of Suistamo.

Actual excursions are equally important as a source of inspiration. The beaches of Mozambique, a kalimba-building workshop around an open fire in 30-degree heat; the bumpy roads, smoke sauna and wood boats in a village in Dvina Karelia; all such experiences have made an indelible impression on my mind and have helped shape my musical idiom.

The kind of music that I find interesting and captivating is hypnotic, repetitive and plays around with melodic motifs. Such was the music played in Karelia in particular, at the turn of the 20th century, originally on the kantele and jouhikko and in song, later on the accordion too. This music actually has the same form that can be identified in today’s electronic dance music: a rhythmic and melodic fragment only a couple of beats long is repeated over and over to create a texture that puts the listener or dancer into a trance. Recognising this similarity led me to explore what would happen if I combined the aesthetics of traditional kantele music with today’s electronic beat. The results have been great at least for Suistamon Sähkö [Suistamo Electricity], a band that evolved out of my Laboratory of Tradition in 2015.

In addition to composing landscapes and excursions, sound is an important input for my music. The individual playing styles, singing voices and instrumental sounds of performers influence the music I write. My newest sound discovery, and my newest instrument acquisition, is a Soviet-made Notka accordion, a two-row instrument originally designed for children. I was fascinated by the curious sound and idiosyncratic sound production of the Notka. Its melancholy tones have led me to write music evoking nostalgia for the Karelia of the past, the sorrow of evacuees in wartime who had to leave their homes behind. The Notka is also a wonderful tool for developing new playing techniques: it is so light that it is easy to fool around with the bellow tremolo to conjure up dance rhythms.

Although I have delved deep into archives and particularly into the traditional music of the Suistamo area through my research, the fact is that modern folk music finds its inspiration absolutely anywhere, not just in dusty antiquities. In analysing my recent work, I realised that a song named Kutsu [Call] on the new album of Suistamon Sähkö was initially inspired by Madonna’s album Madame X, which led my thoughts through pop aesthetics to the continent of Africa, specifically the soundscapes of Mozambique and Benin. I borrowed the accordion riff from the mating call of the Karelian cuckoo, which I heard one summer night in 2014 as we were making a short film actually in Suistamo, in Russia.

My music occupies both past and future, both reality and imagination. It moves both mind and body. Human beings have always played music to dance to and for entertainment, and this is what I do too with my new ethno-techno and accordion trance music.

The new album of Suistamon Sähkö Varokaa! Hengenvaara (Beware! Danger) has been released on 5 March, 2021.