All musicians seek inspiration, sometimes on the other side of the world. Eero Hämeenniemi, a Finnish composer of classical music, works in close partnership with top Indian musicians, while Kiureli Sammallahti sings Indian Bhangra music in Finnish.

Musical cultures have always interacted, and the music we nowadays think of as Finnish is in fact often borrowed. Many Finns have been inspired by and developed a profound interest in the music of other peoples and nations.

Eero Hämeenniemi (b. 1951) first heard the call of India back in the 1960s when, at the suggestion of Karlheinz Stockhausen, he read Sri Aurobindo’s book Life Divine and subsequently studied Indology and Sanskrit at the University of Helsinki. In time, music nevertheless began to demand his full attention, and India had to wait until he had completed his studies.

“I then began studying modern languages, starting with Hindi. I first went to India in 1984. The idea was to tour India for two weeks under a cultural exchange scheme, but I spent the whole time in Chennai and then stayed on at my own expense…”

How, then, did Hämeenniemi get so deeply immersed in Indian music? For as a student he received virtually no encouragement in this direction.

Over the decades, Hämeenniemi has delved deep into the art music of Southern India, in particular. In India they call him a Western classical music composer. “Each qualifier is necessary, because if I just say I’m a composer, people think I’m a poet. Then they ask me, ‘Who tunes your compositions?'”

Eero Hämeenniemi has a lot to say about the roles of composer and musician. In India, there is no such thing as a composer who does not play or sing.

“The thing that interests me is musicianship. This takes in various functions: playing, composing, performing, improvising. Composers who can only compose don’t interest me that much. Even in the West, a composer who does not also perform is a fairly recent phenomenon that’s emerged only in the past hundred years or so. Indian musicians take it for granted that I play and sing as well. There’s no such thing as a composer who can’t play – they don’t even understand what it means.”

At some point along the way, improvisation has got lost in Western classical music. But there is improvisation in many of Hämeenniemi’s works. Sometimes a whole chamber orchestra, such as Avanti!, will improvise.

“As I see it, my role as composer is to be responsible for the division of labour, to assign people jobs they’re good at. This mostly means that the Indians handle the complex rhythms and the Westerners the harmony. Melody and its development are very much communal ground.”

“Where Western musicians solve equations of the first degree, Indians solve third-degree equations,” Hämeenniemi explains. “In India, a basic rhythm exists, but no one plays it. They nevertheless play a number of levels over it. I usually compose at the so-called second level.”

“But the Indians are specifically good at Indian rhythms! If I write Western rhythms for them, or ones of my own, they can’t necessarily grasp them.”

Hämeenniemi collaborates closely with Indian musicians, challenging both them and the Finns to realise new things, side by side. “When Finnish and Indian musicians get together to perform classical music, many of them may assume that it’s difficult and beyond them. My advice to the Finns is to behave just as they would with their Western colleagues.”

“But as for Indian musicians and jazz players: they know at once how to play together. They just choose a suitable scale and off they go! In Southern India they have 72 different scales, some of them familiar to jazz players.”

Eero Hämeenniemi has worked with leading Southern Indian musicians, such as the celebrated singer Bombay Jayashri. Nowadays he gets a lot of phone calls. What do the Indian musicians who call him really want?

“They want music to play and gigs! And if they phone me, they expect a Western, not a Carnatic piece.”

Part of the landscape

Getting inside Indian culture has been a lengthy process.

‘White sir speaks like on television’ people from the slums said with a smile when Hämeenniemi spoke to them. But he has not found that the colour of his skin is much of a problem in Southern India.

“I’ve sort of integrated. People look on me as part of the landscape. There may be more racism in Northern India.”

“At home in Finland I’ve encountered some aggression. Some people ask what I have against Western music. They see me as a sort of traitor to my own culture. And then there are those who are worried about whether my Indian partners are being exploited. As if they were wimps incapable of defending themselves!”

It takes courage to be multicultural

His Indian influences are strongly present in the music of Eero Hämeenniemi. It is not, however, a fusion of musical cultures; it is art.

“My own music may sometimes be regarded as a mixture of Indian and Finnish. But that’s not what I believe – because that would imply that there is, as it were, an Indian bit here and a Western bit there. Yet they both spread out in an infinite number of directions.”

“There is no country on the map where people make this sort of music. You couldn’t create music like this by mixing, because music reflects the personalities of all the musicians involved in making it.”

I ask Hämeenniemi his views on multiculturalism – a relatively new idea in Finland. It also ties in strongly with the concept of the Finnish ethos.

“Multiculturalism requires good self-esteem, the courage to make yourself receptive to other ways of thinking. Because you then question your own ways of thinking, and that may be frightening.”

“Finland and the Finns have, I suppose, felt threatened, and maybe with justification. But the idea of a Finnish ethos is a 19th-century construct! And it embraces various dimensions in a curious way: looking west, but also east.” 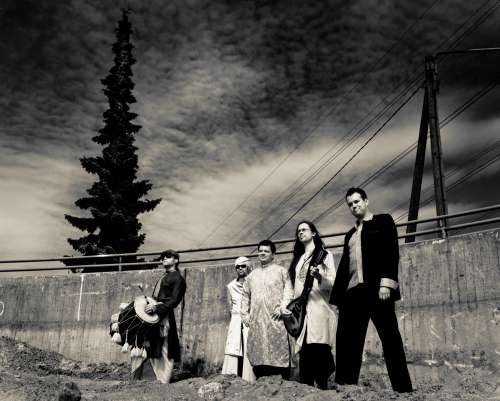 From Punjab to Helsinki

Another innovative combination of Finnish and Indian is the Finnish brand of Bhangra. This is a new genre of music created by the Shava ensemble formed in Helsinki by Kiureli Sammallahti. Originally based on the Punjab folk music of Northern India, Bhangra evolved and acquired its contemporary, popular form among immigrants in England and is now lending itself with ease to Finnish!

Kiureli Sammallahti first discovered the music of Northern India via sahaja yoga. Finland has a small group of people interested in Indian music, some very actively, he reports. A few years ago they hit on the idea of forming a Bhangra ensemble singing in Finnish. In addition to Sammallahti himself the members are Lauri Salokoski (bass), Valtteri Bruun (guitar), Sami Rönkä (dhol, tabla) and Hannu Riski (drums).

“You can if you like play Indian music as such, and that’s not a bad thing. But I’m Finnish, and I try to make music from my own perspective. The Indian streak is in a way part of my identity. I’ve tried to bring Indian music closer to the Finns. But you have to live in India to internalise the music.”

The innovative use of the Finnish language is a prominent element of Shava’s music. Some of the Finnish Bhangra lyrics are evocative of hip hop in their bravado (“The chieftains are invincible”), or Kiureli may sometimes find inspiration in everyday Helsinki life (“The morning Hertziga bus” [Herttoniemi, a Helsinki suburb]). Classic Suomi-iskelmä (the Finnish equivalent of the German Schlager) numbers also get the Bhangra treatment. Even lyrics by Finland’s national writer Aleksis Kivi can be “Indianised”.

“Finnish provides the frame of reference. Otherwise our music does not include any features of Finnish culture you could place in the tourist window. We play a lot with verbal rhythms, just like in the traditional poetic metres of Finnish folk music. The lyrics are founded on the verbal rhythms of Punjabi, and Finnish adapts to this very well.”

Shava released its debut album, Betoninen kotimaani (My Concrete Homeland), in autumn 2010. “So far it hasn’t set a megatrend,” says Sammallahti with a grin. “But we have performed to all sorts of people. They were a bit taken-aback in our local bar but they liked it all the same. Our version of “Suomenmaa” (The Land of Finland) has become something of a hit among Finland’s Somalis.”

The world’s only white Bhangra ensemble, Shava has made something of a name for itself internationally and done gigs in Canada, Iceland and elsewhere. At their gigs they play both Finnish and Indian Bhangra numbers, the latter in Punjabi. Just before this interview Gurcharan Mall, a Bhangra musician living in England with whom Shava has been in close contact, released a new video on the Bhangra channel showing white Sammallahti singing a duet with an Indian lady, in Punjabi.

“That a was a bit too much for some… But others gave it their wholehearted approval!”

Multinationalism is the future

Kiureli Sammallahti believes that more and more fusion music like this will, of its own accord, be forthcoming.

“Why? Because nations are living together more and more. I believe and hope that they will get mixed – but not by force. The reason why there is racism is that cultures differ.”

“This is a relevant issue for the future of mankind. Can we live side by side? My feeling is that multinationalism is the future. Shava has chosen to approach the issue through humour.”

So what happens when traditional musics get mixed up? Are the old musical cultures in danger of extinction?

“Naturally all musics will change; they always have! Though the classical music tradition of Northern India could not exist without a certain degree of purism. If you don’t want to stick to its tradition, you’d better do something else.”

“Music is in a constant state of flux. Today’s music differs from that a century ago. In a way, there’s no need to institutionalise purity; a strong identity already exists, and things that are alive will develop. Fusion may also be uninteresting, it may result in the loss of the music’s core and identity.”