When Jaakko Laitinen & Väärä Raha came on stage in the Horta Hall of Bozar in Brussels, as part of the 11th edition of Balkan Trafik!, they must have realised it was not going to be an easy victory. The folding chairs for the audience had been placed at the far end of a huge empty dance floor, some thirty metres from the stage. To compensate for this they moved into gear right from the very start, and delivered what could be expected from them: energetic and exciting Balkan music with a subtle twist.

Contrary to what they want you to think, their stage act is very carefully thought out. Irony seeps through in the way they dress: smart – dark suit and tie – but also somewhat out of place in an informal setting like this. And although they make it quite clear they take their music very seriously, it is presented with subtle humour. When after an initial ten minutes of turbo charged speed-balkan they slowed down to create a mellower mood, Laitinen introduced the next song as being about “the pleasures and dangers of love and blueberries”.

What followed, was a lengthy and indeed more subdued piece, but with intriguing shifts in key and melody. Having demonstrated their chops, they obviously found it was time to highlight other aspects of their craft. Äiti Kulta, the abovementioned piece, offered clarinet player Sami Kurppa ample opportunity to demonstrate his skill as an improviser with a fine sense of melody. Tuomo Kuure and Janne Hast are one heck of a rhythm section, but when Kuure takes the bow, he can also provide a lyrical foundation for a more romantic mood. Accordion player Marko Roininen freely switches between roles like a mid-fielder in football: from a dazzling solo to orchestral sounding chords or pulsating breaths of air from his bellows. 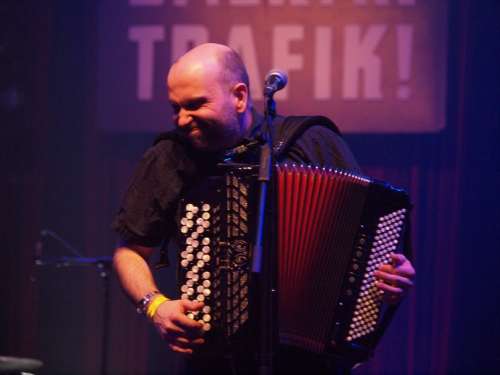 The subject matter of the songs illustrates their tongue-in-cheek attitude, as do some of the titles. Despite its deviously cheerful melody, Supermarketin parkkipaikalla (At the supermarket parking lot) is a protest song about the effects of the economic crisis. In another song Laitinen sings: “The world is dreaming but I was once again unable to sleep.” Their adaptation of a traditional Turkish song raises a profound philosophical question: If you change the lyrics and also alter the melody, is it still the same song?

Laitinen and his comrades couldn’t care less. Being authentic is not what they are after. Right at the start of the concert Jaakko made that very clear when he said: “We bring you original Balkan music from Finnish Lapland”. And original it is! These Finns take the Balkan as a mere steppingstone, freely including tunes from Turkey and Russia and even injecting rhythms from the Middle-East, a recent preoccupation of drummer Janne Hast.

It was quite obvious the festival public in Brussels didn’t care much about authenticity either. Their enthusiasm grew louder and louder, and peaked at precisely the right moment, when Laitinen announced the last tune. This was greeted with boo’s and whistles, clearly showing how much everyone regretted it was almost over. “We will be back later,” Laitinen added with a broad smile. “Don’t miss our second set!”

Unfortunately, that set wouldn’t start until after midnight, way too late for your humble reviewer, who had to be back in Amsterdam the next morning.

In the summer 2017 Jaakko Laitinen & Väärä Raha performs at Musikfeste auf dem Lande in Lübeck, Germany, and Viru Folk festival in Käsmu, Estonia, among others.